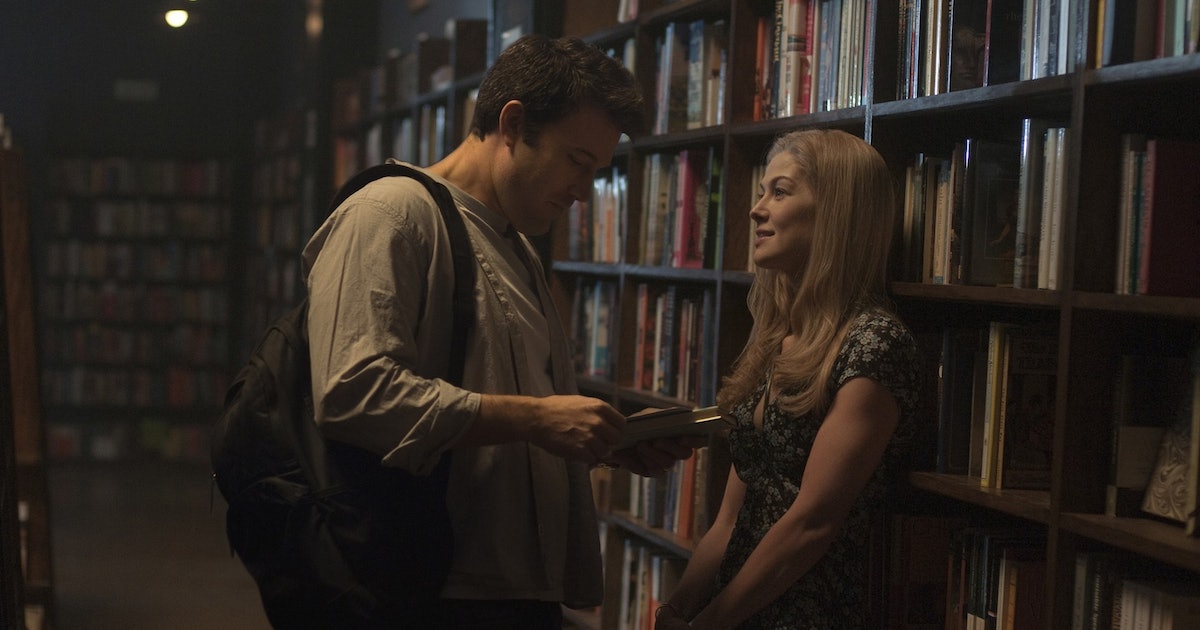 In the 2010s, there was a surge in the popularity of women-led psychological thrillers: The Girl on the Train, The Woman in the Window, A Simple Favor. But the grandmother of them all is Gone Girl. The book, and its subsequent film adaptation, is both the primary reference point for this genre and its most frightening creation.

What puts Gone Girl ahead of its successors is almost certainly its “Cool Girl” monologue. Amy Dunne (Rosamund Pike) speculates that women often put on a persona and make themselves into the woman pop culture tells them men they want: Easy-going, laid-back, undemanding, and above all else, gorgeous. They might change themselves to match the man’s desires until the woman is no longer herself, but a “cool girl.”

Amy admits that she’s been playing the part of the cool girl for her husband, Nick, but finds the part unsustainable, putting the spotlight on a trope we so often see in media. More people started paying attention to how this fantasy woman was shown in pop culture, and more people became critical of this unrealistic archetype.

And then there’s the fact that Amy Dunne is a distinctly memorable character who’s both fascinating and terrifying.

Amy didn’t get the greatest start in life. Her parents profited off her childhood with an insipid children’s book series and “fixed” all Amy’s adolescent mistakes through their “Amazing Amy” character. It has to feel demoralizing when your parents doctor up your adolescence and package a better you as a product for public consumption. That level of invasiveness is a good way to create a homegrown sociopath.

After Amy and Nick lose their jobs, they’re forced to sell their New York brownstone and move to Nick’s middle-of-nowhere hometown in Missouri. There, Nick thrives, but Amy is isolated and learns her increasingly distant husband is cheating on her. You can’t help but feel sympathy for her, which is exactly what Amy wants.

Nick Dunne is a run-of-the-mill neglectful adulterer. Amy’s picture of him as an abuser isn’t accurate, but he’s clearly disinterested in a way that becomes obvious to the detectives investigating Amy’s sudden disappearance. Nick can’t even answer their question about what his wife does during the day because he genuinely doesn’t know.

The infamous twist is that Amy has staged the perfect crime scene. She seems to know Nick would help dig his own grave: His defensiveness, obliviousness, and smarminess all work against him in the eyes of the police and the public, and his affair with his 20-year-old student is icing on the cake. Nick is no criminal mastermind – he’s a cliché. But while Nick is unpleasant, he’s not a murderer, and when that becomes obvious, you don’t want to see him imprisoned.

Amy’s single-mindedness is impressive and scary. She spends a year planning the ultimate revenge down to the last detail, from creating a fake diary to stealing her pregnant neighbor’s urine in order to fake her own pregnancy. Forget spilling her own blood when she wants to set a scene; she’s also fully prepared to commit suicide just to “teach her husband a lesson.” Her commitment and meticulous planning would be admirable if it weren’t so disturbing.

Amy may have played the part of Nick’s cool girl, but she creates a new part for herself as an idol for America to love. She becomes the beautiful, pregnant, murdered wife, and when that role no longer works, she settles on a new identity as a beautiful, triumphant kidnapping survivor. Top it off with real motherhood via Nick’s old fertility clinic sperm, and she becomes the perfect all-American icon.

It’s clear that Amy has always played a part. She was a prop for her parents, she was her husband’s trophy, and then she’s a beloved national heroine. Amy has lived her life as a character, and she’s willing and able to change her character to suit her needs and destroy anyone she wants to. That’s what’s scariest about Amy, that’s why Nick stays with Amy, and that’s why the two of them are surely doomed.

David Fincher’s faithful adaptation uses his signature dark aesthetic, contributing to the oppressively sinister tone. No scene goes to waste on Fincher’s watch. Gone Girl is a modern noir that will keep you on the edge of your seat until the harrowing finish, and even then, you’ll still have questions.

In the 2010s, there was a surge in the popularity of women-led psychological thrillers: The Girl on the Train, The Woman in the Window, A Simple Favor. But the grandmother of them all is Gone Girl. The book, and its subsequent film adaptation, is both the primary reference point for this genre and its most…

In the 2010s, there was a surge in the popularity of women-led psychological thrillers: The Girl on the Train, The Woman in the Window, A Simple Favor. But the grandmother of them all is Gone Girl. The book, and its subsequent film adaptation, is both the primary reference point for this genre and its most…