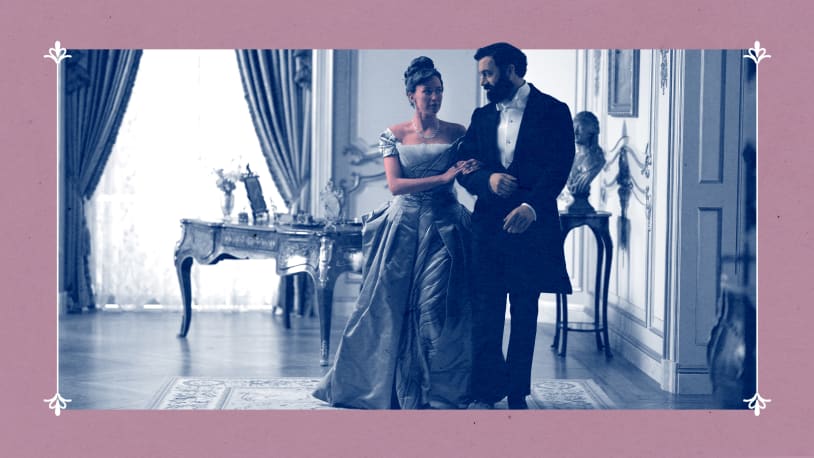 The show The Gilded Age could have been

The Gilded Age is the perfect setting for prestige TV in the 2020s: A period that juxtaposed dizzying wealth with grinding poverty, idealistic rhetoric with pervasive corruption, and moral reformism with omnipresent corruption, the decades that followed the Civil War resemble our time more closely than any other era in American history. But television is a visual medium, and a successful show needs to be something to see as well as to think about. Happily, the period is an aesthetic feast, too, from the rich colors and patterns of its clothing (not the austere black and white we know from photographs) to the imposing architecture and luxurious furnishings of its mansions.

Unfortunately, The Gilded Age, which aired its first episode on HBO Monday, is not the show we need. Created by Julian Fellowes, best known as the creator of Downton Abbey, the series reduces the turmoil and excitement of the period to Mean Girls with corsets and tailcoats. Many elements of the production, from the vaguely anxious strings of the musical theme to the Muppet grimaces that greet every faux pas, are borrowed from Fellowes’ earlier hit. But without that show’s superb cast and the magic it derived from shooting in a real great house, it’s hard to care who’s going up and who’s headed down in the social roller coaster on which the characters chug along.

What’s not repeated from Downton Abbey is largely derived from classic literature from and about the late 19th century. Former English majors will recognize parallels to the works of Edith Wharton, Henry James, and perhaps less beloved authors, such as Theodore Dreiser, too. Indeed, to avoid relegation to the unfashionable genre of white people wearing white ties, the show includes an African American character who yearns to be a writer herself — though, at least in the first few episodes, her struggle to find a publisher for her work has more to do with travails of Jo March in Louisa May Alcott’s Little Women than with the uncertain interlude between the end of Reconstruction and the coalescence of Jim Crow.

With such rich literary sources, The Gilded Age might have done better to stick with just one of the originals. Wharton and James have been adapted many times, with varying success. Except for An American Tragedy, though, Dreiser is largely untouched by Hollywood. Or what about William Dean Howells, who was genteel enough to frequent the drawing rooms of the rich, but skeptical enough to perceive their vanity and cruelty? His 1889 A Hazard of New Fortunes is among the very first novels to take New York City as its subject at a time when New England still dominated American letters.

A more recent author and book might have worked even better, though. In 1976, the iconoclastic writer Gore Vidal published a novel called 1876, set in the same milieu that The Gilded Age depicts. The juxtaposition of the titular year with the bicentennial of independence being celebrated in the year of the book’s publication was not coincidental. For Vidal, that year’s disputed presidential election was a sort of alternate national birthday, the point at which a ruthless modern state replaced the ramshackle confederation of 1776.

It’s not that 1876 is great literature. In fact, it’s not even as good as Vidal’s Burr and Lincoln, to which it serves as a sequel. The best passages are witty and nasty — the author’s signature mode — but Vidal does better skewering minor historical figures like Ward McAllister (who also appears in The Gilded Age) than developing his fictional personae. Like Fellowes, he tends to substitute caricature for characterization.

Vidal also abandons the juxtapositions of high society and low life that enlivened his previous work. His stand-in, Charles Schemerhorn Schuyler, visits many brothels. But he says almost nothing about the wave of immigration then in the process of transforming the city — and country. In that respect Vidal again resembles Fellowes, who uses foreign accents to denote the ethnic and cultural diversity of the period and setting but doesn’t attempt to depict the rivalry, bigotry, and occasional violence that make it so evocative of our own time.

Still, Vidal succeeds where Fellowes fails in providing his costume drama with real stakes. Schuyler is drawn to support Democrat Samuel Tilden in the 1876 presidential race in hopes that he’ll get a diplomatic post in return. But he still recognizes that the combination of corruption, voter suppression, and backroom bargaining that finally secures victory for the Republican candidate Rutherford B. Hayes represented the nadir of the founders’ hopes for virtuous self-government. As a young man in the earlier book, Schuyler was beguiled by Aaron Burr’s debunking of George Washington, Thomas Jefferson, and the rest as ineffectual frauds. As an old man himself, he begins to realize that they were genuinely admirable, despite their flaws.

Some qualities that marr 1876 as literature make it perfect for TV. The baggy plot, proliferation of subplots, and colorful minor characters provide plenty of material for a eight- or 10-episode season. If the showrunners were really ambitious, they might even attempt to bring Vidal’s whole seven-part “Narratives of Empire” series, of which 1876 is the third entry, to the screen. Instead, The Gilded Age offers Nathan Lane using a Colonel Sanders accent as the pompous McAllister. Imagine what a different actor could do with the lovably villainous Aaron Burr.

The Gilded Age isn’t entirely without charms. Christine Baranski is an acceptable substitute for Maggie Smith in the grand dame role and would be better with more to do. The recreation of the 19th-century streetscape is also impressive, if too pristine for a time when outdoor surfaces were unavoidably deluged with a combination of coal dust and horse excrement.

As The Washington Post points out, though, Fellowes doesn’t seem to understand that Mark Twain and his collaborator Charles Dudley Warner coined the phrase “Gilded Age” to evoke a shiny surface concealing a worthless core. The title of the show is only too appropriate.

January 25, 2022 January 25, 2022 The Gilded Age is the perfect setting for prestige TV in the 2020s: A period that juxtaposed dizzying wealth with grinding poverty, idealistic rhetoric with pervasive corruption, and moral reformism with omnipresent corruption, the decades that followed the Civil War resemble our time more closely than any other era…

January 25, 2022 January 25, 2022 The Gilded Age is the perfect setting for prestige TV in the 2020s: A period that juxtaposed dizzying wealth with grinding poverty, idealistic rhetoric with pervasive corruption, and moral reformism with omnipresent corruption, the decades that followed the Civil War resemble our time more closely than any other era…

The NFT craze has stopped being funny