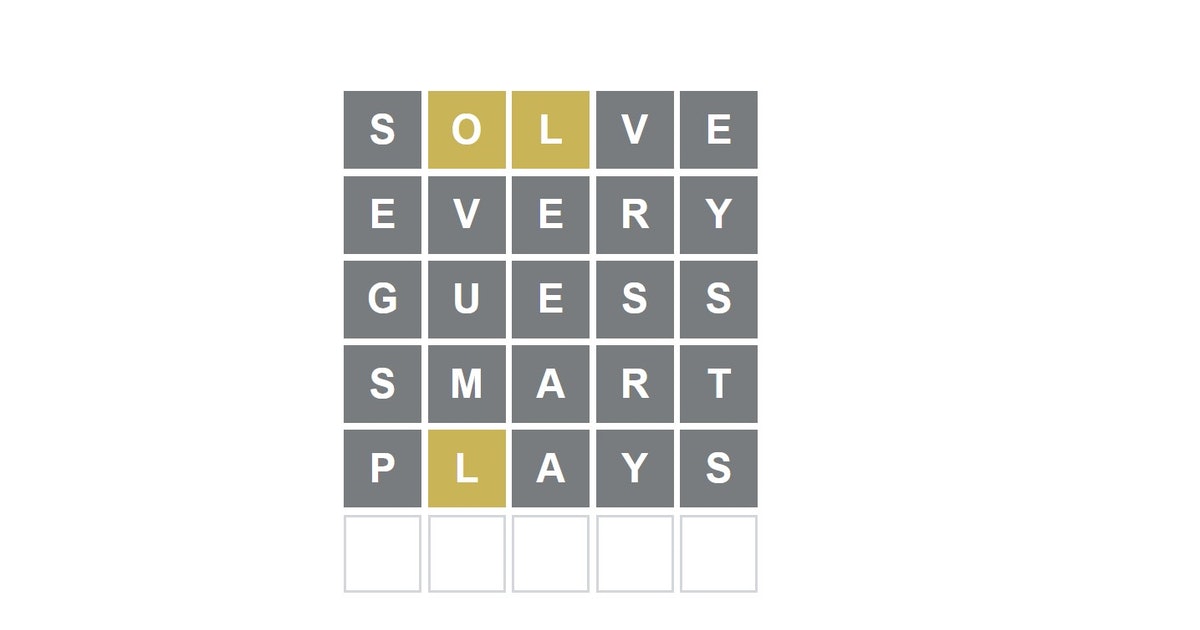 Wordle is taking the world by storm, with master and amateur wordsmiths doing their best to guess developer Josh Wardle’s daily magic word. That being said, while the vast majority of players prefer to enjoy the free web-based game as is, the app has prompted plenty of intrigue from those in scientific communities. Is it possible for an algorithm to determine the absolute best starter word for any situation? Which single five-letter word is capable of offering the best chance for a single-guess victory?

These are the questions some of the brightest minds are currently trying to figure out. And, as you might’ve guessed, the answers to those quagmires remain fairly complex. Perhaps unsurprisingly, homemade Wordle algorithms are a dime a dozen these days, and each one seems to spit out a slightly different answer than the next. However, when combined, they reveal some common tips that might improve your guessing accuracy without resorting to search engines for the precise solution.

Our first example exploring the science of Wordle arrives via a Medium blog post from programmer and game designer Tyler Glaiel. Glaiel has made an algorithm to dissect Wordle’s known list of 2,315 possible answers and 12,972 potential guesses by assigning each word with a hypothetical score. Desirable green letters are worth two points, and less certain yellow letters are worth one point. The useless gray squares, of course, are listed with a value of zero.

In studying the work he’d done, here’s what Glaiel discovered.

Hikmet’s algorithm strives to solve the same problems as Glaiel’s, but it does so via different means. Instead of scoring potential guesses based on their overall accuracy, this algorithm works by deducing the frequency by which certain letters appear in the list of solutions and ignoring the potential guesses. Simply put, the words that use the most popular letters in the solutions are deemed the best starter words to guess.

Here are some of Hikmet’s best starter words according to his Unwordle tool designed to help you solve Wordle puzzles with a 99.3% success rate. It uses the exact same strategy of only examining the list of answers to figure out the best possible starting guesses. These starting words are listed in order of their effectiveness.

The algorithm described in Andrew Taylor’s “How to Always Win at Wordle” video sounds like a combination of the prior two philosophies. It offers a numerical score to each of the potential solutions, with the lowest score signifying the best solutions worth guessing. Here’s what Taylor’s script was able to uncover.

You can always win at Wordle by choosing these very specific starter words.

The Tom Neil Algorithm: Tom Neil is the creator of the popular Wordle Solver tool, and his algorithm is based entirely on the idea of answer elimination. Rather than working from a strategy of starting with words that use lots of vowels, for example, Neil feels that it’s actually more advantageous to start your first two guesses in Wordle by using words with 10 completely unique letters. Through this philosophy, one eliminates the most potential solutions the fastest.

Rather than digging into the code and peering at the game’s list of potential answers, Loren Shure published a blog post on MathWorks that describes Wordle strategies with less cheating involved. Using a stock dictionary of five-letter words, Shure simply made a list of the most commonly used letters and scored five-letter words based on how often the word featured those letters. Here are the best first guesses that this particular scientist worked from.

In subsequent guesses, Shure takes a cue from the likes of Neil by focusing on words with disparate letter combinations until the field is narrowed down far enough to start honing your attempts.

Just like many scientific endeavors, the process of solving Wordle is oftentimes far from precise. However, if we boil down the strategies leveraged in these four examples, there are some tips that may be worth considering as you work through your daily games.

Even some of these polished algorithms can’t solve every single Wordle, but there’s an obvious scientific solution to Josh Wardle’s simple game.

Wordle is taking the world by storm, with master and amateur wordsmiths doing their best to guess developer Josh Wardle’s daily magic word. That being said, while the vast majority of players prefer to enjoy the free web-based game as is, the app has prompted plenty of intrigue from those in scientific communities. Is it…

Wordle is taking the world by storm, with master and amateur wordsmiths doing their best to guess developer Josh Wardle’s daily magic word. That being said, while the vast majority of players prefer to enjoy the free web-based game as is, the app has prompted plenty of intrigue from those in scientific communities. Is it…