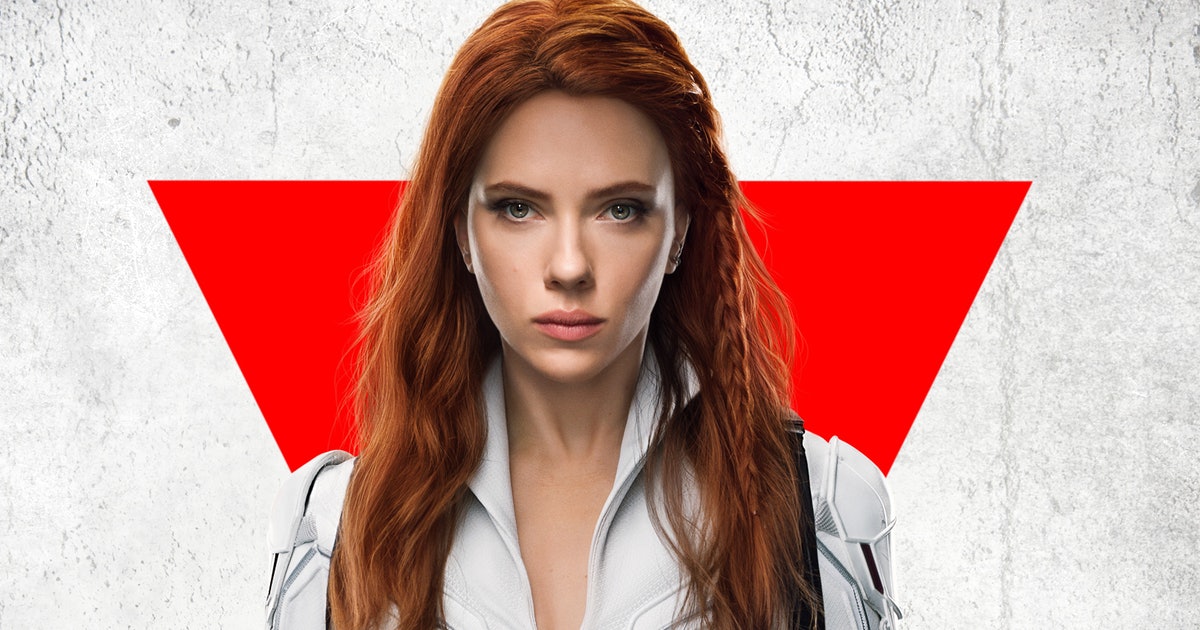 This article about the film Black Widow was originally published on December 3, 2019 and updated on January 22, 2022 following the movie’s release. Read on for the original article, with some new changes to reflect the latest updates on this topic.

At last, Marvel is giving fans what they want: A solo film starring Scarlett Johansson as Natasha Romanoff, also known as the elite spy and Avenger, “Black Widow.” She’s got red in her ledger, and she’s finally going to wipe it clean.

On July 9, 2021, Black Widow opened in theaters, giving Marvel faithful a final farewell for the Avengers’ resident spy. Set after the events of 2016’s Captain America: Civil War and before 2018’s Avengers: Infinity War, Black Widow confronts her past when a mysterious new enemy, the Taskmaster, reopens the Red Room training facility and sends elite killers after Natasha.

Following months of leaks and paparazzi set photos, Marvel Studios officially unveiled Black Widow at San Diego Comic-Con 2019. “[It] feels like this culmination of ten years of Marvel,” Johansson said at the Comic-Con red carpet after the film’s public reveal. “I feel like Marvel has matured, as we all, and we’re finally able to make female-driven superhero films for grown-ups. Yes, it’s about time. It feels like a long time coming.”

A long time coming, indeed. After numerous scheduling adventures due to the global pandemic, Disney finally announced Black Widow for a summer 2021 theatrical release — with a day-and-date Premiere Access option on Disney+, too.

Below, you’ll find everything to know about Black Widow, from the film’s release date to casting information, trailer uploads, and more.

When was the Black Widow release date?

Black Widow was released in theaters and on Disney+ Premier Access on July 9, 2021

The first official film of Phase 4, Black Widow has experienced numerous scheduling changes due to Covid-19. Originally scheduled for May 1, 2020, the film was later pushed to November 6 of that same year, and then May 7, 2021. It finally landed on July 9, 2021, both in theaters as well as on Disney+ with Premier Access.

Where can I watch the trailer for Black Widow?

On December 3, 2019, Marvel released the trailer for Black Widow. The two-minute teaser contains the first look at Florence Pugh as Yelena Belova, another spy trained in the Red Room; David Harbour as Red Guardian, a Russian copycat of Captain America; and the masked supervillain Taskmaster.

You can watch the trailer below.

On March 9, 2020, Marvel released another full trailer for Black Widow, which further reveals the Taskmaster and his role in the movie. You can watch that trailer directly below.

Who is starring in Black Widow?

Scarlett Johansson returns as Natasha Romanoff. The film was Johansson’s seventh appearance as the Black Widow on the big screen, but it was the first to feature her as the main star. It may also be her last appearance, given (spoilers!) her character’s demise in Avengers: Endgame.

On April 3, 2019, Variety reported that David Harbour (Stranger Things) and Rachel Weisz (The Favourite) were both “in talks” to join the film as unnamed characters. They were later confirmed to play Red Guardian and Melina, respectively. The Red Guardian is a Soviet-era version of Captain America, who is powered by a weaker version of the super-soldier serum than was given to Steve Rogers.

Variety also named Florence Pugh to be “on board” the project. Her role is Yelena Belova, another spy who becomes Natasha’s successor as Black Widow in the comics. Pugh stuck around in the MCU as long as the Hailee Steinfeld and Jeremy Renner-starring Hawkeye, the Disney+ series hitting later in 2021.

Additionally, O-T Fagbenle (The Handmaid’s Tale) played Mason, a resourceful ally of Natasha. Ray Winstone played the film’s antagonist Dreykov, the head of the notorious Red Room that trained Natasha and Yelena. Olga Kurylenko was behind the mask of Taskmaster, Dreykov’s mysterious lacky who is able to mimic her opponents’ fighting style.

Who wrote and directed Black Widow?

Cate Shortland, the Australian director of 2012’s Lore and 2017’s Berlin Syndrome, directed Black Widow for Marvel Studios. The Hollywood Reporter broke the news of Shortland’s hiring back in July 2018. In an interview with Entertainment Tonight, Harbour praised director Cate Shortland, whom he called “a phenomenal” director: “She directed a movie called Lore. She’s a phenomenal director, so what’s really exciting to me about it is it’s gonna be like a real deep, interesting film. And so, yeah, I’m just excited for it as a film as well as a superhero movie.”

Before Shortland, Marvel hired Captain Marvel co-writer Jac Schaeffer to pen the script. Schaeffer came to attention after her acclaimed sci-fi comedy, The Shower, about an alien invasion that takes place during a baby shower, was scooped up by Anne Hathaway in 2015, though it has yet to be produced. Schaeffer is no stranger to the modern MCU, of course, as the head writer behind 2021’s breakout hit and official Phase 4 curtain-raiser WandaVision.

In a 2019 interview with Inverse, Shaeffer commented on Black Widow, saying, “I’m not interested in adhering to comic canon that is discriminatory in any way or that violates my values system.” She added that while she didn’t grow up a fan of comic books, “there’s just so much opportunity to make big, positive statements… Especially something like Captain Marvel and Black Widow, to have these female-centered stories — I just can’t not be involved in that.”

What is the plot of Black Widow?

Set immediately after 2016’s Captain America: Civil War, Black Widow follows a wanted Natasha (Johansson) on the run from the U.S. government for helping a fugitive Captain America. On her own and without the Avengers by her side, Natasha comes face to face with unfinished business from her past.

A mysterious villain known as the Taskmaster, who can mimic the skills and abilities of other superheroes just by watching them, reopens Black Widow’s haunted training facility, the Red Room, where a new class of assassins hunts down Natasha and her family.

Which Black Widow comics should I read?

Paul Cornell’s Black Widow: Deadly Origin and Marjorie Liu’s Black Widow: The Name of the Rose are wise “homework reads” if you want more on all things Black Widow. Mark Waid’s Black Widow from 2016 is also an excellent spy book that heavily influences the film.

What did critics have to say about Black Widow?

Black Widow has a 79% rating on Rotten Tomatoes and a score of 67 on Metacritic. Praise was given to the performances of Scarlett Johansson and the supporting cast, as well as the high-octane action pieces.

This article about the film Black Widow was originally published on December 3, 2019 and updated on January 22, 2022 following the movie’s release. Read on for the original article, with some new changes to reflect the latest updates on this topic. At last, Marvel is giving fans what they want: A solo film starring…

This article about the film Black Widow was originally published on December 3, 2019 and updated on January 22, 2022 following the movie’s release. Read on for the original article, with some new changes to reflect the latest updates on this topic. At last, Marvel is giving fans what they want: A solo film starring…