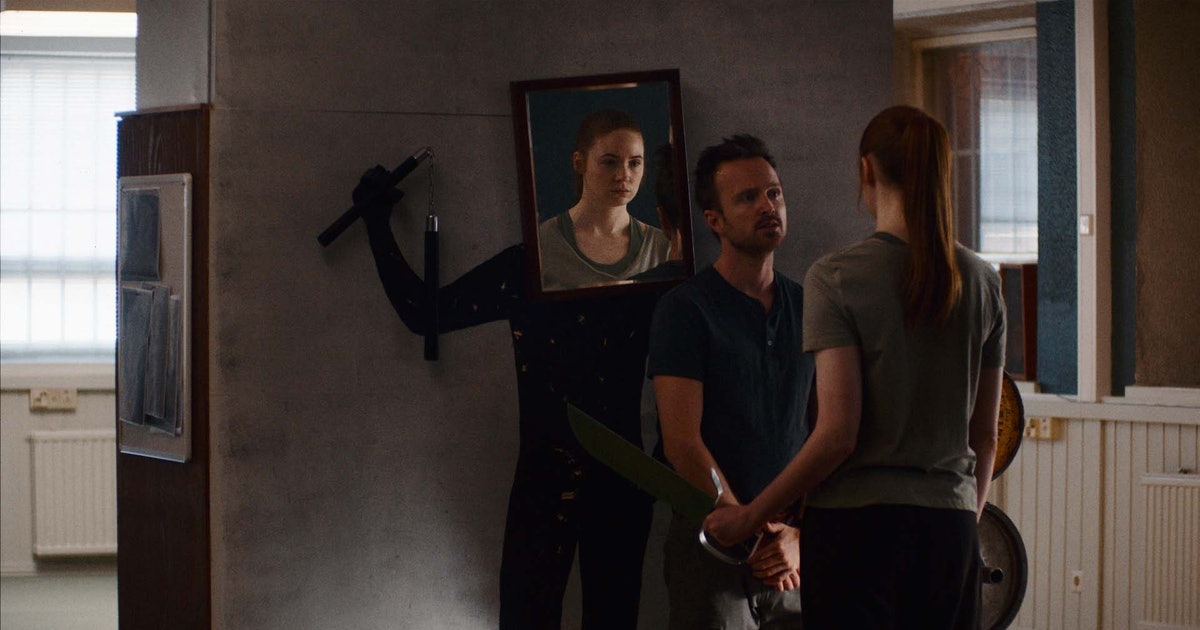 Calvin and Hobbes had a story arc in 1991 where Calvin, having previously cloned himself to disastrous results, upgrades his duplicator machine with an “ethicator” to manifest a twin from his good side. The scheme goes swimmingly at first. The clone’s unflagging virtuousness offers Calvin a smokescreen as he skives off school work and chores. Then the clone courts Susie Derkins, a bridge too far for Calvin, and the two brawl while Hobbes spectates with a quip, “How existential can you get?”

Director Riley Stearns brings that same energy to his third feature, Dual, a soft sci-fi morality tale about the complications of cloning but infused with a version of the machoism driving his last film, The Art of Self-Defense. Fresh off its premiere at the 2022 Sundance Film Festival, Dual is lean and efficient, a ruthless dark comedy that pits human against duplicate in a grim contest of will. The film is many things, but it isn’t comfort viewing.

Stearns sets the story in an unspecified future technologically similar to ours – smartphones and tablets are commonplace – except for the practice of cloning as an option available to people on death’s door. For Stearns’ purposes, that person is Sarah (Karen Gillan), who suffers from a rare condition that will snuff her out in an unknown window of time.

Enter Sarah’s Double (also Gillan), her clone, or “replacement” in Dual’s parlance. She’s an exact physical match to Sarah save for eye color, an error in the cloning process easily rectified by contact lenses. Sarah instructs Sarah’s Double (her government name) on her favorite foods, music, and sex positions to ensure that when she dies, she’ll spare her boyfriend, Peter (Beulah Koale), and her mother (Maija Paunio) from grief.

Then Sarah’s terminal illness miraculously goes into full remission, which means Sarah and Sarah’s Double must fight to the death for the privilege of being Sarah. That’s the law. So Sarah connects with a combat trainer, Trent (Aaron Paul), and prepares to kill herself. How existential indeed.

Dual is a surprising spiritual kin to Benjamin Cleary’s Swan Song, where cloning served a similar function for folks with imminent expiration dates. Stearns, of course, takes his approach to the subject aesthetically and morally. There’s little detail given to “how” or “why,” only the expectation that audiences will suspend disbelief and accept the film’s basic conceit. Dual presents cloning as a matter-of-fact part of society, where we have little reason to question the science.

However, we have more reason to engage with the idea that government-mandated trial by combat poses a greater ethical conundrum than cloning in the first place. Why can’t there be two Sarahs? When did the world adopt Highlander as an ethos?

Gillan is a talented actress, and so she imparts both Sarah and Sarah’s Double with carefully modulated divergences in character. Sarah is a bummer and an anxious mess. Halfway through Dual, Peter confronts her with the blunt truth that even if Sarah’s Double wasn’t a factor in their relationship, he’d break up with Sarah anyway. By comparison, Sarah’s Double, straight off the cloning line, is perky and bright. She is neither burdened by her mortality nor tarnished by time’s passage. She’s Sarah but vivacious and sexier. Sarah would probably still want to murder her without the mandated dual.

Dual’s bleak idiosyncrasies give us a way to reflect on our moment.

Gillan delineates these slight contrasts with wry effect and expresses emotion chiefly through her eyes. That’s the point. Shakespeare says the eyes are windows to the soul. Sarah and Sarah’s Double have different eyes, and thus, different souls. But Dual isn’t about the soul as much as it’s about cultural mores and bureaucratic institutions and how they dehumanize Sarah by pitting her against her better self. This is not a world that values positive self-improvement. Sarah does improve, but only in the pursuit of slaying Sarah’s Double. Credit where it’s due: At least the dual gives her a goal to shoot for.

Stearns orchestrates the build-up to philosophical violence with his typical drollery, where punchlines are baked into stilted character interactions instead of his script. Dual hits black comic peaks when Sarah meets Trent, a loner and weirdo like her. Aaron Paul plays him with what reads as a performative veteran. Trent knows what he’s talking about the way someone knows what they’re talking about after reading Wikipedia and mainlining YouTube videos. He’s an armchair expert with a practiced tough guy pretense. (Stearns doesn’t put this thought into the film, but Trent might be a replacement himself.)

Dual isn’t about replacements integrating into their originals’ lives, though. It’s about what people are willing to do when facing death or not willing to do, which has a sad relevance as we slog through another year of Covid. That’s outside the scope of what Stearns is doing here. But movies don’t get to choose their moments, and Dual’s bleak idiosyncrasies give us a way to reflect on our moment. Maybe off-kilter gallows humor doesn’t totally suit the material, but its sobering effect is hard to shake.

Dual premiered at the Sundance Film Festival on January 22, 2022.

Calvin and Hobbes had a story arc in 1991 where Calvin, having previously cloned himself to disastrous results, upgrades his duplicator machine with an “ethicator” to manifest a twin from his good side. The scheme goes swimmingly at first. The clone’s unflagging virtuousness offers Calvin a smokescreen as he skives off school work and chores.…

Calvin and Hobbes had a story arc in 1991 where Calvin, having previously cloned himself to disastrous results, upgrades his duplicator machine with an “ethicator” to manifest a twin from his good side. The scheme goes swimmingly at first. The clone’s unflagging virtuousness offers Calvin a smokescreen as he skives off school work and chores.…