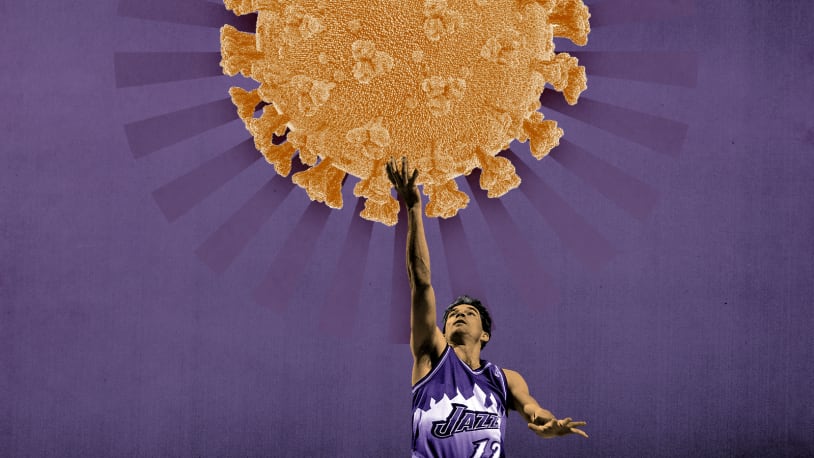 Anti-vax conspiracies in sports | The Week

The sudden cardiac arrest of Buffalo Bills safety Damar Hamlin can likely be attributed to a rare condition called commotio cordis, but that didn’t stop unfounded speculation by some who attributed his heart stoppage to the COVID-19 vaccine. This isn’t the first incidence of vaccine conspiracies springing up in the sports world, either, with Kyrie Irving and Novak Djokovic notably among the stars who have vocally rejected the jab. Here’s everything you need to know:

What are conspiracy theorists saying about the vaccine in sports?

Following Hamlin’s injury, the claim that his heart stopped because he had been vaccinated against COVID circulated among far-right groups online almost immediately, NPR noted. Charlie Kirk, a noted conservative activist who has been a heavy promulgator of anti-vax conspiracies, tweeted after Hamlin was taken to the hospital, “This is a tragic and all too familiar sight right now: Athletes dropping suddenly.”

This rhetoric was shared by Fox News host Tucker Carlson, who falsely reported in a segment the day after Hamlin’s injury that “young athletes are collapsing at alarming rates since COVID vaccines became widely available,” per NPR. Vanity Fair additionally noted that a number of other high-profile figures, including celebrity doctor Drew Pinsky and actor Kevin Sorbo, claimed that Hamlin’s heart had stopped due to the vaccine.

While Hamlin’s injury has shed a newfound light on these types of conspiracies, the claim that the vaccine can cause sudden deaths among athletes has been around basically since the jab became available. The anti-vax movement itself has a long history among conspiracy circles going back hundreds of years, with hesitancy evolving soon after Edward Jenner developed the smallpox vaccine in the 1790s.

A far-right podcaster named Stew Peters even created an entire documentary film called Died Suddenly, which purportedly presented evidence that the COVID-19 vaccine was inherently dangerous and caused people to, as the title suggests, die suddenly. However, an analysis of the film by Canada’s McGill University was able to debunk the majority of its claims, saying the film “raids online obituaries … and stitches a pseudoscientific horror story.”

Why do people believe in anti-vax conspiracies?

Some anti-vaxxers believe vaccines can cause instant death, even in healthy individuals such as professional athletes; as evidence, conspiracy theorists have pointed to the large number of athletes they claim have died after being vaccinated. Anti-vaxxers and Died Suddenly allege the vaccine can cause deadly blood clots, a rumor linked to an exceedingly rare clotting condition that may arise from complications with the AstraZeneca and Johnson & Johnson vaccines.

Even some athletes have begun pushing the conspiracy. In 2020, prior to the COVID vaccine becoming available, Denver Nuggets forward Michael Porter Jr. told reporters, “I’ve never been vaccinated in my life. I’ve never had any shots or anything like that,” and also claimed the pandemic itself was “being used for population control.”

The sentiment was echoed by former Utah Jazz point guard John Stockton. In an interview with The Spokesman-Review, the Hall-of-Famer falsely claimed that perhaps millions of people had died from vaccines, including more than 100 professional athletes.

Is there actual evidence of a connection between the vaccine and athlete deaths?

While it is true that there have been athletes who have suddenly gone into cardiac arrest or died in the past, there is no hard evidence specifically connecting the COVID-19 vaccine to these deaths. Additionally, many of these deaths were seen long before the pandemic, as NPR reported back in 2008 during an investigation of athletes who died from undiscovered heart conditions. This includes Boston Celtics guard Reggie Lewis, who died in 1997 while on the practice court from a structural heart defect called hypertrophic cardiomyopathy. Other athletes have suffered similar fates due to congenital heart conditions.

Many of the anti-vax theorists reportedly use skewed and incorrect data to claim that mass numbers of athletes are dying after being vaccinated. For example, The Associated Press noted that a pair of researchers claimed to have evidence that 1,500 athletes had died since the vaccine became available, as opposed to an average prior to that of just 29 per year, in a story that was shared by Tucker Carlson.

However, AP noted that this data was false: the 1,500 figure compiled news stories about “people of all ages, from all over the world — some of which were attributed to other causes, such as cancer.” Additionally, the 29-death average was from a different data point and methodology, and experts told AP that comparing the two numbers was “not scientifically sound.”

In regards to the potential for blood clots from the AstraZeneca and Johnson & Johnson vaccines, a study in the BMJ concluded that “this syndrome is very rare” and was not something that would affect large quantities of those vaccinated. The study added that any additional risk of blood clots from the vaccine was “not statistically significant.”

What has the reaction been in the medical community?

The vast majority of doctors have shunned the claims against the COVID vaccine, particularly because many of them have asserted that sudden deaths among athletes are often just a sad reality of sports.

“Folks who maintain good amounts of exercise throughout their life span, they end up at lower risk of having these sudden [cardiac] events,” Dr. Meagan Wasfy, a sports cardiologist at Massachusetts General Hospital, told The New York Times. “But for that small period of time where you’re exercising, that risk goes up.”

Wasfy also published a review of a 2015 cardiac study, and concluded, “There are clear health benefits to exercise; even so, patients with cardiac conditions who engage in exercise and athletic competition may on rare occasion experience sudden cardiac death.” This study was published in 2016, four years before the COVID-19 pandemic even began.

Dr. Tom Shimabukuro from the U.S. Centers for Disease Control and Prevention also published a study that concluded there was no corroborative link between the jab and sudden death. Shimabukuro summed up the issue for BBC News, saying, “[It’s] reassuring that reactions to both mRNA vaccines are generally mild and subside after one or two days — confirming reports from clinical trials and post-authorization monitoring.”

January 17, 2023 January 17, 2023 The sudden cardiac arrest of Buffalo Bills safety Damar Hamlin can likely be attributed to a rare condition called commotio cordis, but that didn’t stop unfounded speculation by some who attributed his heart stoppage to the COVID-19 vaccine. This isn’t the first incidence of vaccine conspiracies springing up in the sports world, either,…

January 17, 2023 January 17, 2023 The sudden cardiac arrest of Buffalo Bills safety Damar Hamlin can likely be attributed to a rare condition called commotio cordis, but that didn’t stop unfounded speculation by some who attributed his heart stoppage to the COVID-19 vaccine. This isn’t the first incidence of vaccine conspiracies springing up in the sports world, either,…