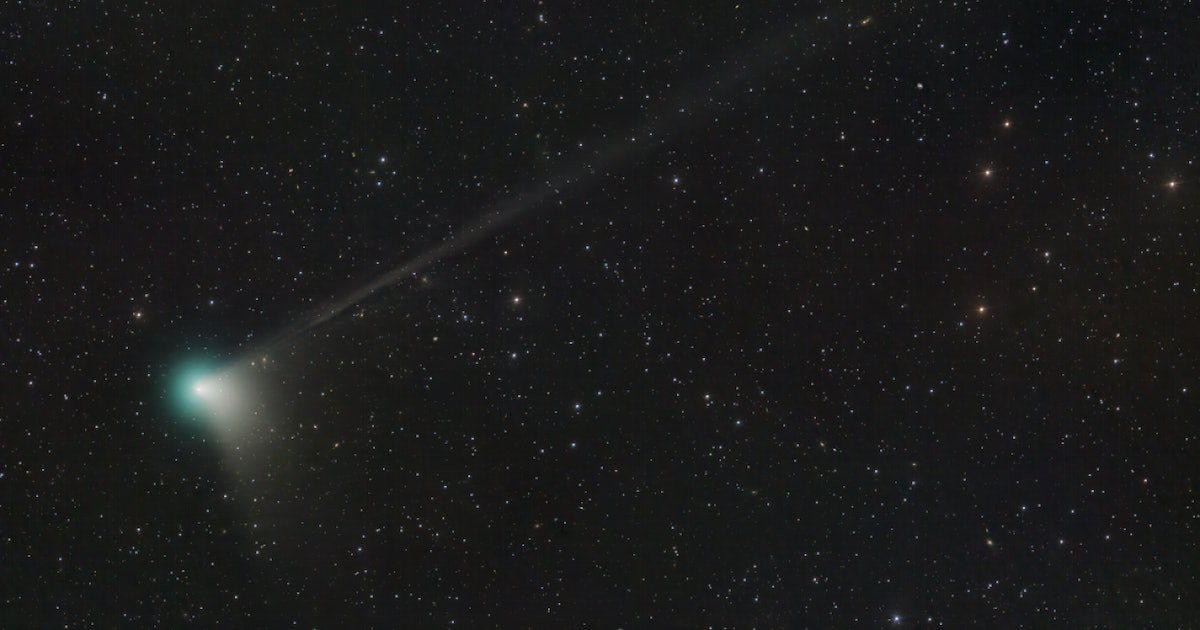 Look up! A bright green comet unseen since the Neanderthals blazes in the night sky this month

Less than a year after astronomers discovered a new (to us) comet slipping past Jupiter’s orbit, it’s passing close to Earth this month — offering a glimpse of something no one will see again for 50,000 years.

Astronomers discovered comet C/2022 E3 (ZTF) in March of 2022, and they’ve been tracking its progress through the inner Solar System ever since. Later this month, it will pass close enough to Earth to be dimly visible with the unaided eye. And you won’t want to miss it.

“This comet isn’t expected to be quite the spectacle that Comet NEOWISE was back in 2020, but it’s still an awesome opportunity to make a personal connection with an icy visitor from the distant outer Solar System,” says Preston Dyches of NASA’s Jet Propulsion Laboratory in a recent video.

What is a comet?

Comets are chunks of ice and dust whose long, eccentric orbits make big loops through the outermost reaches of the Solar System, inward to fly past the Sun, and back again. Some comets spend their distant years in the Kuiper Belt, the ring of icy, rocky objects out beyond Neptune’s orbit. But others, like the fast-approaching C/2022 E3, come from the Oort Cloud: a hypothetical, more-or-less spherical cloud of small icy objects that surrounds the Solar System. The Oort Cloud is hundreds of billions of miles from the Sun and stretches outward for hundreds of billions of miles more.

And from that cold, dark, distant region of space, chunks of dusty ice sometimes come plummeting inward toward the Sun, basking in light and warmth for a little while before gravity slings them back outward.

As a comet approaches the Sun, its ice melts and quickly evaporates. Some gas forms a hazy cloud (called a coma) around the nucleus of the comet, and the rest gets blown backward by solar wind, forming twin trails of gas and dust that always point away from the Sun. Comet C/2022 E3 has an especially eerie greenish coma, a short fan-shaped dust tail, and a long, narrow tail of ionized gas.

Most comets are once-in-a-lifetime sights, like Halley’s Comet, which swings through our neighborhood once every 75 to 80 years. Others are more like once in the lifespan of a civilization, like Comet Hale-Bopp, whose long orbit brought it close to Earth during the heydey of ancient Athens and Sparta, and again in 1997 (the heyday of the Spice Girls and the Backstreet Boys). Hale-Bopp won’t visit the inner Solar System again for another 2,373 years.

Then there’s 2022 E3 (ZTF), which really puts the “long” in “long-period comet.” The last time this particular chunk of ice and dust wandered in from the Oort Cloud, Neanderthals were still alive in Europe. Our species hadn’t yet set foot in the Americas and had only recently made it to Australia. Not only did 2022 E3’s last flyby happen before recorded history, it happened before the oldest known representative drawings.

And it won’t be back for another 50,000 years. You really want to see this comet while you can.

According to NASA, the new comet’s orbit will bring it within 100 million miles of the Sun on January 12, and within 26 million miles of Earth on February 1. Along the way, its eerie greenish glow should keep getting brighter, which makes mid-to-late January the perfect time to catch a glimpse of this comet. The few days around this month’s new Moon on January 21 will offer the darkest skies — if the weather holds out.

As with any astronomical event, you want to get as far away from city lights as possible; that’s especially true with C/2022 E3, which is probably going to be just barely visible with the unaided eye even under ideal conditions. Binoculars may be your best bet, unless you have a telescope.

Less than a year after astronomers discovered a new (to us) comet slipping past Jupiter’s orbit, it’s passing close to Earth this month — offering a glimpse of something no one will see again for 50,000 years. Astronomers discovered comet C/2022 E3 (ZTF) in March of 2022, and they’ve been tracking its progress through the…

Less than a year after astronomers discovered a new (to us) comet slipping past Jupiter’s orbit, it’s passing close to Earth this month — offering a glimpse of something no one will see again for 50,000 years. Astronomers discovered comet C/2022 E3 (ZTF) in March of 2022, and they’ve been tracking its progress through the…

Here are the 5 biggest innovations to expect in 2023