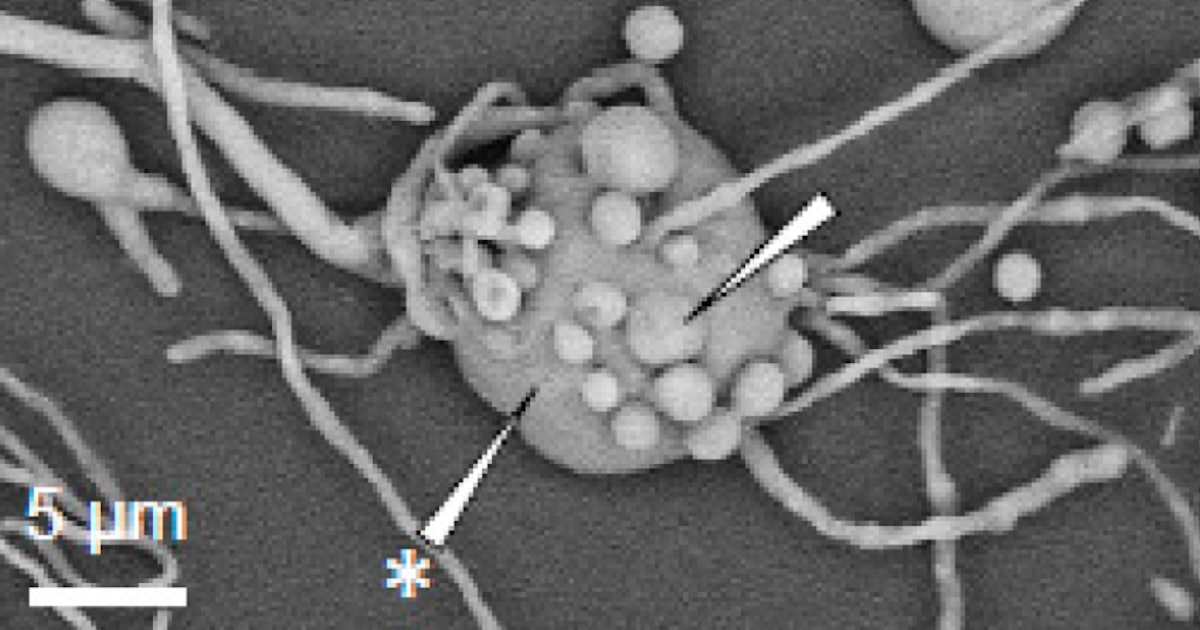 Why a book-loving fungus has alien-hunting scientists excited

Alien life might survive “uninhabitable” environments by simply changing them, suggests a recent study of — bizarrely enough — a fungus that grows on book covers in climate-controlled libraries.

Librarians keep conditions as dry as possible to protect the books from mildew, mold, and other damaging microbes. But a recent study found that one hardy and resourceful fungus, Eurotium halophilicum, can mix itself a drink with just a few molecules of water vapor in the air and some salt molecules from the dusty surface of a book. That’s not great news for librarians, but it may be very interesting news for astrobiologists.

What’s New — When Deutsches Museum conservation scientist Anna Micheluz and her colleagues carefully examined samples of E. halophilicum from several of Italy’s most venerable libraries under a scanning electron microscope, they found that the fungi has a halo of tiny, hair-like filaments, made of the same material as its cell walls. As those filaments wave around, they catch water molecules, surrounding the fungus with a layer of air that’s much more humid than the rest of the air in the carefully climate-controlled library.

But the water is still vapor, which the fungus can’t use (after all, you can’t just drink the air on a humid day). It needs a liquid, like the brine that forms when the water vapor hits a salt crystal.

Picture a tiny clump of salt crystals — so small you need a microscope to see it — mixed in with the dust on the cover of a very old book. The room is dry, but a few molecules of water are still bouncing around in the air, and occasionally those molecules might bump into the salt crystal. If they happen to stick to the salt, the salt absorbs them. And if that happens enough times, the salt melts into a thin film of briny liquid.

That briny film isn’t visible to the unaided eye, but it’s apparently enough to help keep a scrappy little fungi like E. halophilicum nourished and hydrated. “The fungus is living on surfaces that look dry to the human eye, rather than in a visible body of brine water,” write Micheluz and her colleagues.

The resourceful fungus hasn’t just evolved to take advantage of a weird quirk of chemistry — by grabbing water and collecting them into its own personal cloud of humid air, the fungus is actively creating brine for itself to drink (or at least improving the odds that they’ll form).

“This fungus is manipulating the probability that water molecules will hit the salt by just grabbing some and moving them ever so slightly closer to the salt,” says Rivera-Valentín, a co-author on the recent study. “And then the fungus can use the liquid.”

Here’s The Background — Extremophiles here on Earth have already shown us that life exists in surprising places, expanding our definition of habitable to include situations that would be deadly to us humans, but plenty of other living things would find perfectly comfortable. (To the heat-loving bacteria in Yellowstone Park’s hot springs, we’re the weird extremophiles.)

What E. halophilicum shows us is that even microbes can actually rearrange things in their environments to make them more livable. That’s something humans have done for most of our species’ history. It’s how we survive in space, and how we’ll survive on the Moon and on Mars — by creating little pockets of habitability for ourselves.

“Just like humans can go into the Arctic and build igloos or other structures to allow them to survive a very bad environment, so, too, can other organisms manipulate the environment, so that they can continue to exist there,” says Rivera-Valentín. “So it’s a good analog in terms of getting us to think away from this binary structure of something is habitable or not.”

Why It Matters — That’s important perspective for astrobiologists and planetary scientists looking for habitable environments on other worlds.

Librarians put a lot of effort into making the Venice library inhospitable to even the hardiest of microbes, but E. halophilicum flourishes there because it can reshuffle part of the environmental hand it’s been dealt. The same fungus often surprises people in the food industry by spoiling food that’s been stored in super-dry conditions.

“If you look at the organism, and you look at what it needs, and then you will have looked at the environment, you will have said, it will not exist here,” says Rivera-Valentín. “But it does because it can manipulate the environment.” And it offers a strong hint that other microbes might one day surprise astrobiologists by existing where it seems they shouldn’t.

“From an astrobiology perspective, this is a good example of ‘let’s stop being binary and prescriptive,’” says Rivera-Valentín. “Let’s be a little bit more open-minded, because we can see that organisms can manipulate their environments.”

If microbes can survive in seemingly uninhabitable places just by creating their own comfy micro-environments, then we can’t write an alien world off as uninhabitable because its surface is too dry, too cold, or too salty. “Even though Mars might be a very difficult environment to exist in, there’s still a chance that there might be some adaptations that an organism might have gone through in order to persist.”

And according to Rivera-Valentín, the strange case of E. halophilicum is also a reminder to mission planners to be very careful about what microbial stowaways future spacecraft carry, even to places that seem uninhabitable, lest they adapt and take over.

Alien life might survive “uninhabitable” environments by simply changing them, suggests a recent study of — bizarrely enough — a fungus that grows on book covers in climate-controlled libraries. Librarians keep conditions as dry as possible to protect the books from mildew, mold, and other damaging microbes. But a recent study found that one hardy…

Alien life might survive “uninhabitable” environments by simply changing them, suggests a recent study of — bizarrely enough — a fungus that grows on book covers in climate-controlled libraries. Librarians keep conditions as dry as possible to protect the books from mildew, mold, and other damaging microbes. But a recent study found that one hardy…