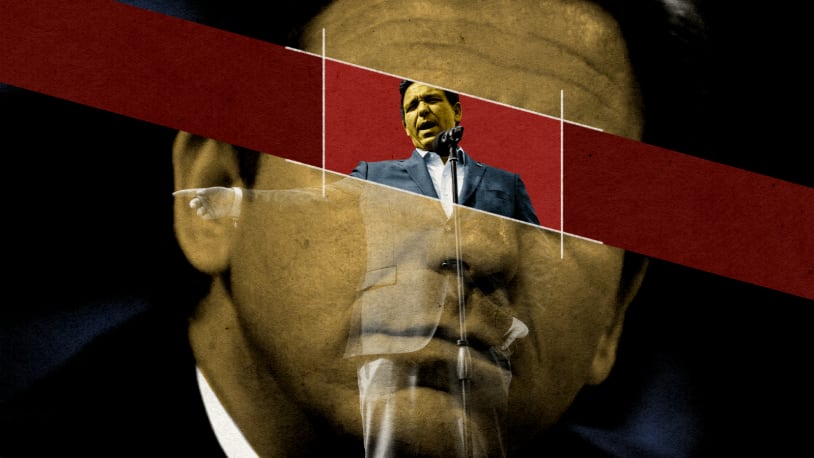 Why do Republicans love DeSantis so much?

With the 2022 midterm elections only weeks behind us, pundits and pollsters have already begun projecting their powers of prognostication forward to 2024 and the upcoming presidential race that will inevitably be dubbed the “most important election of our lifetime” like so many before. But as the full effect of November’s midterms comes into sharper relief, the drumbeat of one emerging narrative has echoed particularly loudly: that of Gov. Ron DeSantis (R-Fla.) and the potential threat he poses to former President Donald Trump, should the pair go head-to-head for the GOP presidential nomination.

While he’s unquestionably enjoying a post-midterm high of good press and even better polling numbers, what’s more open to debate is just why Republican voters are seemingly so enamored with DeSantis to begin with. Having only just won a second term as governor in November, what exactly has the Floridian accomplished since first being elected to statewide office just four years ago — and how have those accomplishments helped fuel his meteoric rise within the GOP? Here’s everything you need to know:

What issues are resonating with Republican voters?

Put plainly: Culture War issues. To the extent that DeSantis has made a national reputation for himself, it’s been largely by placing himself at the forefront of animating conservative bugbears such as COVID-19 mitigation techniques, LGBTQ equality, and expanded voting rights — all of which he has come out strongly against, to the delight of conservatives reveling in his wholesale embrace of such fraught positions.

“You can agree or disagree with DeSantis and the Florida legislature on any of these moves, measures, and proclamations,” The Hill opinion columnist Joe Concha wrote back in March of this year. “What makes the governor popular among his supporters is that he doesn’t appear to give a damn about what the Florida press or the national political media think about how he’s leading his state. He has a plan and principles that appear to be unwavering.”

In an essay for the Herald Tribune published nearly a full year before Concha’s piece, Tampa Bay Young Republicans president Jake Hoffman offered a similar assessment of DeSantis’ popularity. “While pandemic policies have obviously taken priority over all else, the truth is that DeSantis’ approval ratings were extremely high even before the coronavirus arrived,” Hoffman asserted. “He was popular because he stood up to the cancel-culture media — and because he wasn’t afraid to buck the establishment, even when that establishment included his own party and predecessor.”

The appeal, then, is part of a broader conservative appetite for candidates willing to not simply wade into culture war issues, but to do so with an enthusiastically pugilistic flair. Just as Republicans gravitated toward Trump for being a “fighter,” so too is DeSantis’ reputation as a bulwark against a liberal/Democratic/leftist/socialist agenda helping power his ascendent position within the party.

What has he actually delivered for Republicans?

As governor, DeSantis has notched some significant political victories for conservatives in his state; high-profile legislation like his popularly dubbed “Don’t Say Gay” bill not only had an impact on millions of state residents but also established a template for other conservative culture warriors to follow in terms of both tactics and rhetoric. A May 2021 analysis for the Tampa Bay Times highlighted other legislative victories from DeSantis’ first term — among them, bans on transgender athletes competing in women’s sports, crackdowns on mail-in voting, and penalizing social media companies for certain policies — all of which, the paper concluded “were the end cap to a carefully crafted legislative agenda aimed less at the needs of the governor’s home state and more at the national Republican base.”

Even DeSantis’ forays into the ongoing debate over immigration (an issue with which his state has a unique and considerable history) seem conspicuously plotted with an eye toward a national audience. While immigration itself was a major factor in the minds of Florida voters during the 2022 midterms, DeSantis’ most high-profile engagement thereof was his potentially criminal effort to send two plane-fulls of undocumented asylum seekers from Texas to Martha’s Vineyard under dubious promises of jobs and resources upon their arrival.

While DeSantis wasn’t the first conservative governor to relocate groups of migrants to ostensibly “blue” states, his Martha’s Vineyard ploy nevertheless vaulted him into the center of the national immigration debate by virtue of its sheer brazenness — even as it removed him from the more immediate immigration issues relevant to Floridians themselves. As Vox put it in September, “The scheme is [Texas Republican Gov. Greg] Abbott’s brainchild and one that Arizona Gov. Doug Ducey has replicated, but DeSantis has been the one in the headlines for it lately. That’s by his design. He’s currently locked in a competitive race for re-election with his Democratic opponent, former Florida Gov. Charlie Crist, and has used the stunt to try to revive border security as a major issue in the midterms.”

To the extent that DeSantis’s re-election win in November could be seen as a vote of confidence for him from his state’s erstwhile swing-state electorate, even it has since been framed within the broader context of national GOP politics, with the conservative Washington Examiner exclaiming, “Florida stands alone for incredible Republican results,” and The Washinton Post calling it “a blowout victory that was an affirmation of his appeal to the voters who have turned Florida into a haven for conservatives.”

So does that mean he’s a sure thing against Trump?

Not at all. While DeSantis has begun regularly polling ahead of Trump in one-on-one matchups between the two, his popularity is in no small part a byproduct of Trump’s legal and personal struggles since Election Day. As the sole declared candidate in the 2024 election so far, the race for the GOP nomination is as much Trump’s to lose as it is DeSantis’ to win. And should other Republicans throw their hats in, it would likely be only to Trump’s benefit given the relative stability of his core base of voters, which hovers at around 30 percent of the party. As was the case in the 2016 election, given a crowded field, Trump has the advantage of being able to pick off challengers one by one, growing his share of primary voters over time. Despite his recent deluge of poor polling and personal setbacks, there’s little reason to suspect that his ironclad grip over a large enough bloc of MAGA faithful wouldn’t itself be enough to buoy him through a crowded campaign season in which other candidates would see their share of the electorate distilled with each additional person who declares.

Crucially, neither Trump nor DeSantis have made any major campaign moves since the midterms, with many in the GOP wondering why the Trump team hasn’t ramped things up, even as they also wonder why DeSantis hasn’t officially declared his intent to run in the first place. To wit, DeSantis’ most public post-midterm moves have been casting off allegations of a feud with the former president, and more recently announcing plans to impanel a statewide grand jury to investigate criminal charges against COVID-19 vaccine manufacturers — an effort that seems to fit in his larger pattern of making political moves with an eye toward the national conservative electorate.

For the time being, then, DeSantis can enjoy the growing attention and respect his carefully crafted positioning has earned him. Whether he manages to actually differentiate himself from Trump once the 2024 campaigns get started in earnest remains to be seen. Republicans have long cast about for a “Trump-slaying” candidate who can embody the former president’s conservatism while freeing the party of his personal baggage. To date, those Trump-slayers have proven to be wishful thinking on the part of the GOP. If he does run, it would be up to DeSantis himself to break that mold.

December 15, 2022 December 15, 2022 With the 2022 midterm elections only weeks behind us, pundits and pollsters have already begun projecting their powers of prognostication forward to 2024 and the upcoming presidential race that will inevitably be dubbed the “most important election of our lifetime” like so many before. But as the full effect…

December 15, 2022 December 15, 2022 With the 2022 midterm elections only weeks behind us, pundits and pollsters have already begun projecting their powers of prognostication forward to 2024 and the upcoming presidential race that will inevitably be dubbed the “most important election of our lifetime” like so many before. But as the full effect…