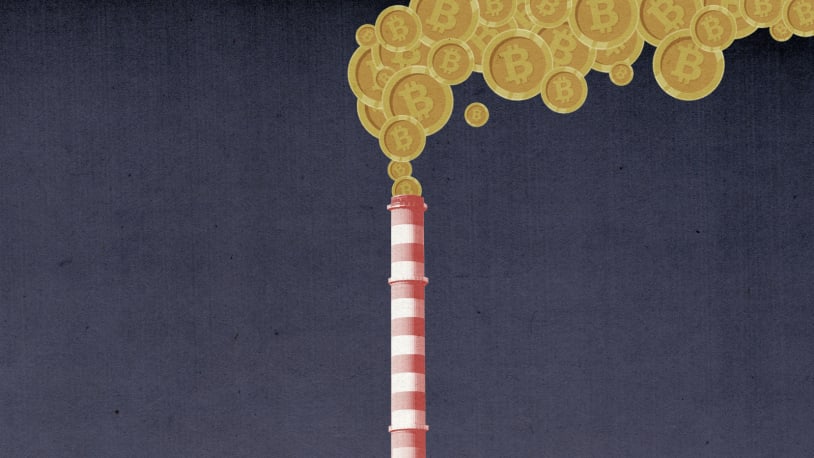 Is cryptocurrency bad for the environment?

Crypto has come under intense scrutiny following the crash of FTX, a $32 billion cryptocurrency exchange. However, many remain unaware that cryptocurrency actually has a steep environmental cost. Here’s everything you need to know:

Cryptocurrency is a digital currency that is not monitored by a centralized authority. It is based on blockchain technology. There are over 9,000 cryptocurrencies in existence, the top two being Bitcoin and Ethereum. Because the currency is decentralized, nobody monitors its value the way regular currency is monitored.

Digital currency can be used to make some purchases; however, most people choose to invest in cryptocurrency, Forbes writes. Cryptocurrency transactions are verified using an encryption system and recorded in a public ledger known as the blockchain. New crypto units are produced through a process called mining, in which computers perform complicated mathematical analyses, resulting in crypto coins.

The process of mining cryptocurrency, as well as recording and storing transactions in the blockchain, places substantial pressure on the environment.

The blockchain is essentially a secure database shared between computer nodes that stores information electronically. The information is stored in groups called blocks, which have a maximum capacity. Once it’s reached, the block closes and links to the block before it, hence the chain. The system allows for the blockchain to be a clear timeline of transactions that anyone can view.

In order for transactions to be added to the blockchain, they must go through a verification method. The two main ones are proof of work and proof of stake.

The main culprit for environmental damage is the proof of work method. It involves mining, where the first computer to solve a math puzzle is rewarded with the currency that is then recorded in the blockchain. In order to do so, many use application-specific integrated circuit (ASIC) miners, which are very powerful computers designed to mine a certain cryptocurrency, writes Insider. The more ASIC miners there are, the higher the competition. “The more machines on the market, the more difficult it becomes to mine,” explains Junior Theomou, the founder of Miners DeFi, to Insider. “So now you have a competition going on, with more and more machines, mining and competing within each other.” The method of verification requires intense processing power.

Proof of stake is a newer method that uses less processing power, where a certain amount of cryptocurrency is staked, and anyone who stakes currency can verify transactions. The more you stake, the more you can verify. “It’s almost like bank collateral,” explains Buchi Okoro, co-founder, and CEO of cryptocurrency exchange Quidax, to Forbes. This method is much faster and doesn’t require energy-intensive equation solving.

How does it affect the environment?

Mining cryptocurrency is responsible for high levels of energy consumption, especially since proof of work is still the most dominant verification method. According to the University of Cambridge, Bitcoin, the largest global cryptocurrency, alone produces over 40 million tons of carbon dioxide per year and consumes an average of over 80 terawatt-hours of energy per year. Also every four years, the amount of coins earned after mining gets halved, requiring double the amount of energy to produce one coin, Insider explains.

While Bitcoin is just one type of cryptocurrency, research from the White House Office of Science and Technology Policy (OSTP) found that cryptocurrency in general produces about 120 and 240 billion kilowatt-hours per year, which exceeds the total energy use of Argentina or Australia and accounts for between 0.4 percent to 0.9 percent of global energy usage. It also accounts for approximately 0.3 percent of global annual greenhouse gas emissions.

Crypto mining also produces a large amount of electronic waste. Bitcoin produces an average of 40 kilotons of e-waste per year. This is largely due to how quickly mining technology becomes obsolete due to new advancements. Research has shown that mining technology only lasts an average of 1.29 years, per BBC. The ASIC miners are incredibly specialized, making them impossible to repurpose once they are no longer useful.

Many in favor of crypto argue that the technology uses renewable energy to function; however, there have been conflicting numbers on this. One source even found that Bitcoin’s renewable energy usage actually dropped in 2021, Time reports. There is plenty of evidence to show the harms of greenhouse gas emissions as well as waste, including rising sea levels and harm to wildlife. The world is also in the midst of an energy crisis due to Russia’s war on Ukraine, which calls cryptocurrency energy usage into further question.

Many crypto companies have acknowledged the environmental impact and have made strides to improve the system.

For example, the second-largest cryptocurrency Ethereum has announced that it plans to move away from proof of work verification and move toward proof of stake verification, which has a greatly reduced ecological footprint. Many independent crypto groups also came together to form the Crypto Climate Accord aiming to make the industry net zero by 2030 and completely decarbonized by 2040.

In the U.S., the Biden administration has made curbing crypto emissions more of a pressing issue. In a White House press release, the administration listed recommendations from the OSTP including improving energy efficiency as well as investing in more research on technologies that could lower environmental damage.

However, Bitcoin doesn’t show any signs of changing its system. “It’s only as secure as it is because it hasn’t changed ever. And that is what people love about it,” explains Theomou to Insider. This isn’t due to a lack of options. There are plenty of mining methods that don’t require as much energy and the crypto industry can opt to switch to renewable energy sources. Many smaller currencies have already opted to use proof of stake verification and over 200 currencies signed the Crypto Climate Accord.

Theomou concludes, “The more people learn about crypto, they learn about all the options, and they can easily decide not to use one crypto and therefore use another which is more environmentally friendly.”

The U.S.-Africa strategy under Biden

What’s going on with Real IDs?