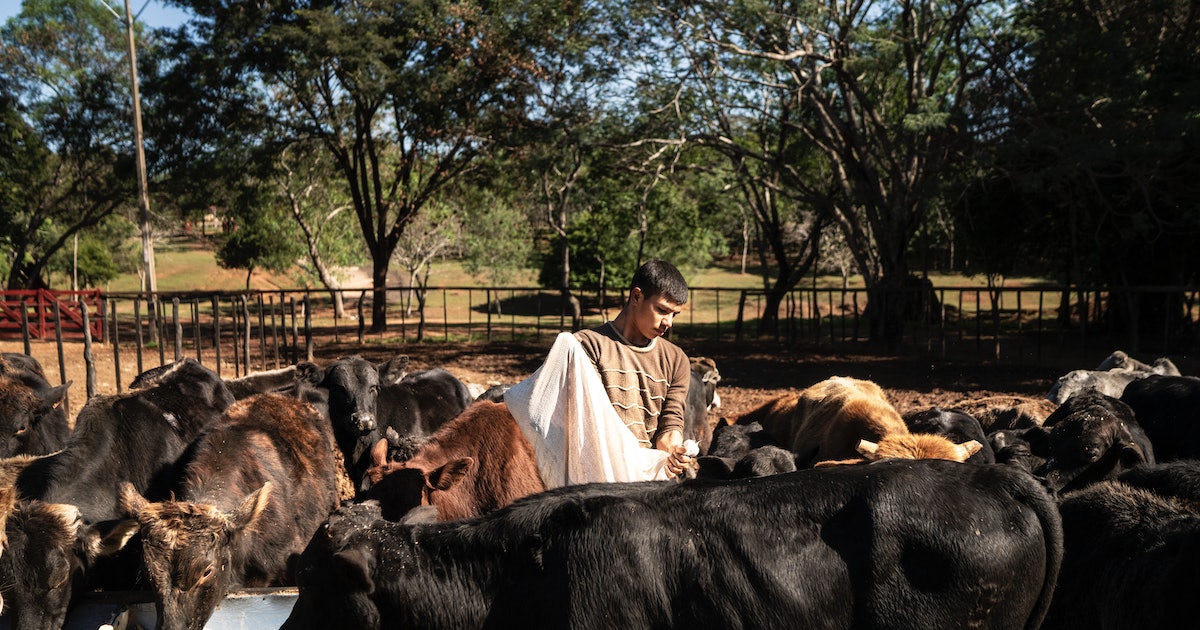 In Paraguay, cows offer a way out of poverty — and perhaps a greater peril

Isaias Fernández may be just a teenager, but he has a dream.

“To have my own cow one day would fulfill a dream — the dream of being near freedom,” says the 16-year-old as he herds 20 or so cattle up a hill.

Fernández is currently in his fourth month as an apprentice on a cattle ranch called “La Querencia” in Misiones, a rural area in southern Paraguay, but it is his second year of work as a tropero, or cattle driver. He is one of the countless teenagers in rural Paraguay who work as troperos while completing their high school studies.

Fernández’s day starts before dawn and ends after dusk. Today, the placid cows are obeying their young herder without complaint.

“It isn’t always this smooth,” says Fernández. “The bulls do as they please. Sometimes they kick you.”

In landlocked Paraguay, farming offers a way out of poverty — at a cost. These are the stories of the people living at the frontlines of our global food supply chain. Read more.

All the way to the bank

The first cows set hoof in the New World in 1493 alongside the conquistador Christopher Columbus on his second Atlantic voyage. In modern-day Paraguay, there is a saying that “having a cow is to have a bank” — the currency runs on milk, replenishment of the land, and meat for the family table. A cow is an asset that holds its value, like gold.

Roughly 70 percent of Paraguay’s working population depends on informal jobs with low salaries and unstable working conditions. At the same time, the country’s youth suffers from a systematic lack of spending on education coupled with hefty entry fees to domestic universities. In 2018, official statistics showed that 280,000 Paraguayans aged 15 to 29 neither studied nor worked. For tropes like Fernandez, the dream of owning a cow offers a more assured boost up the social and economic ladder — apprenticeship, to full-time ranch gig, to owner.

“I’ll finish school because it’s a good thing, but I won’t afford to continue studying — this is where my future lies,” says Fernández, nodding toward the pasture.

“This is where I always want to be,” he says as we zigzag across the pasture with the cows. Eventually, he leads the cattle into fenced-in lanes, funneling them toward their food. Once they are fat enough, they will contribute to Paraguay’s rapidly expanding meat export industry — and the country’s accompanying environmental collapse.

Paraguay remains a country with significant land inequality and a growing cattle industry at a time when “all estimates agree that cattle are the main source of global livestock emissions,” according to the Intergovernmental Panel on Climate Change. In Paraguay — and South America in general — IPCC states that the agricultural expansion “has driven profound landscape transformations in the region,” decimating native vegetation, leading to deforestation and increased greenhouse gas emissions. The emissions from the red meat industry have “a disproportionate impact on total emissions.”

Paraguayans consume roughly 430 million pounds of red meat in any given year, constituting 0.30 percent of the world’s consumption, or about 55 pounds per person. Compare that to consumers in the U.S., the planet’s leading beef guzzler, whose population eats 21 percent of all the red meat consumed worldwide — 27 billion pounds according to United States Department of Agriculture — or about 80 pounds per person. But Paraguay is a major meat exporter, shipping beef to countries like Russia, Taiwan, and Israel. Soon, Paraguayan cattle ranchers expect to gain access to the U.S. meat market — “an important goal,” according to Santiago Bertoni, Paraguay’s secretary of agriculture and livestock.

Paraguayan beef may be a choice cut for meat lovers around the world, but most consumers remain oblivious to the costs to the environment where the meat is bred, slaughtered, and packed up for shipping.

Paraguay has suffered from prolonged and brutal droughts in the last few years — the consequence of shifting climate cycles, but also linked to deforestation in the eastern forest pockets along the Brazilian border and the northern Chaco region.

There, small-scale farmers and Indigenous peoples find themselves increasingly displaced by cattle ranching and plantations of genetically modified versions of maize, rice, wheat, and — primarily — soybeans, which degrade the soil.

“The Chaco is Paraguay’s last remaining green island,” says Teresa Mayo, a researcher and campaign director at the London-based human rights organization Survival International. “But we’re losing it all at a speed that trumps the deforestation rates of the Amazon Basin.”

“Twenty-five percent of global land use, land-use change, and forestry emissions are driven by beef production,” states the Worldwide Fund for Nature (WWF).

But throughout the Americas, the role of cattle — and red meat — is complicated by their deep cultural and social significance.

At noon, after the cows are fed, Fernández takes a piece of ham hanging from a butcher’s hook to an open brick grill sat next to a pig sty. There, the traditional Sunday asado is about to begin.

The ranch owner and Fernández’s boss, Fredy Caballero, 44, cleans the grill in preparation for cooking up a feast of ham, chorizo, and Sopa Paraguaya, a traditional cornbread pudding made of corn flour, cheese, egg, milk, and onion. But the main event is a slab of Paraguayan beef. The meal is washed down with shots of rum.

“I’m exactly where I set out to be,” Caballero says as we sit amid a cloud of greasy smoke with the ranch hands and Caballero’s eldest son, six-year-old Fredy Jr., who is practicing his skills using a whip.

“I was five years old the first time I joined my father to herd the cattle on this piece of land,” says Caballero. “Then, there was a lot of forest around here.”

Nowadays, the trees and their accompanying ecosystems are long gone, replaced by monotonous cattle pastures and soybean plantations. Caballero, for his part, owns 180 of the 2 million or so cows raised and slaughtered every year in Paraguay.

“The climate crisis rages in front of our eyes.”

Caballero’s father started raising cattle in the 1980s as part of Paraguay’s “Green Revolution,” launched under the military dictatorship of General Alfredo Stroessner. Then, more than 13 million hectares of land were privatized and ended up in the hands of influential landowners with close ties to Stroessner’s Colorado Party, which still holds power today, albeit as an elected government.

Caballero takes me on a drive along a dusty road that runs through fields tattooed by the signs of drought.

“Prolonged droughts have hit us hard these last years,” he says.

“There’s no question about it,” the rancher adds, “the climate crisis rages in front of our eyes.”

A host of stray horses are herded into an enclosed area where summer droughts and winter frosts have given the grass little time to regrow. The horses are restless and hungry. Their hunger paints the complex canvas of a reality where Paraguayan cattle ranchers are both victims and perpetrators.

Despite evidence of the environmental consequences, Caballero sees few alternative means to put food on the table for himself, his wife, and his four children.

“These past two years remind us that the environment is changing at a more rapid pace than before,” he says. “The only thing I know for sure is that droughts, colder winters, and global inflation makes it very expensive to be poor. Against nature, there’s nothing you can do — it’s all about adjustment, whether you can stay afloat or if you sink.”

Reap as you sow

A little way up the road, Fredy Jr. assists Fernández and the other troperos herding scattered cows and horses. Fredy Jr. wants to continue his father’s work as a rancher. Perhaps by then, Paraguay’s importance as a meat exporter will have grown, and the influence and money that comes with access to the American market might have trickled down to him and his herd.

“Who wouldn’t want to be someone influential?” asks Caballero Sr. as he leans against his vehicle. “A market as big as the U.S. market means a lot of money ­— but in Paraguay, most exclusive deals, whatever the field, are promised to big players with political contacts.”

“What you reap is what you sow,” the rancher says and squints at the winter Sun. “In 10 years, I just want to maintain what I have, to see that all I’ve built is still standing.”

Dust covers Isaias Fernández’s neck where a thin cross is tattooed. A cross capturing faith and identity, an anchor in a time of changing tides. Something to hold on to when answers to complex questions go missing like so many renegade cattle.

Now, he and his fellow troperos at the “La Querencia” cattle ranch are going to play soccer.

“Tomorrow is a new day,” he says. “First work in the morning, then school, then work again in the afternoon. That’s life.”

This is part two in a three-part series: The Killing Fields.

Isaias Fernández may be just a teenager, but he has a dream. “To have my own cow one day would fulfill a dream — the dream of being near freedom,” says the 16-year-old as he herds 20 or so cattle up a hill. Fernández is currently in his fourth month as an apprentice on a…

Isaias Fernández may be just a teenager, but he has a dream. “To have my own cow one day would fulfill a dream — the dream of being near freedom,” says the 16-year-old as he herds 20 or so cattle up a hill. Fernández is currently in his fourth month as an apprentice on a…

The world is addicted to soy — in Paraguay, these farmers pay the ultimate price