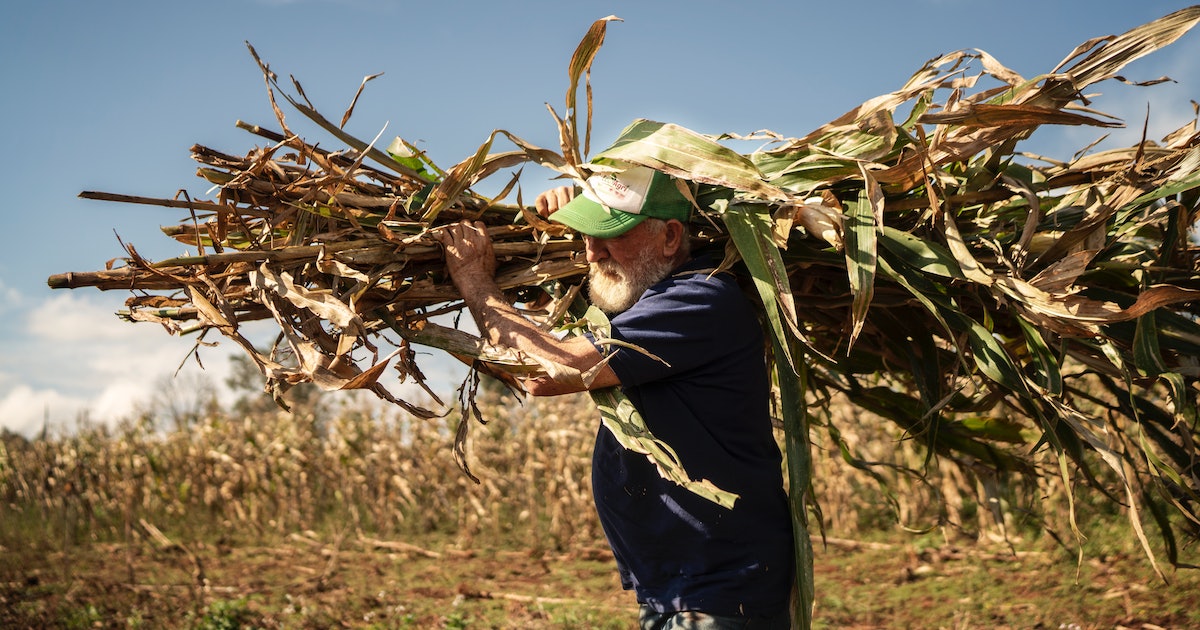 To Ireno Vega and his wife, Zulma Chávez Bustamante, the existence and knowledge of how to grow and prepare yerba mate, an ancient Guaraní tea, represents more than a means to make a living.

“It means survival,” says Vega, a 60-year-old subsistence farmer with a wind-whipped face and a Hemingway beard. “And hope.”

Yerba mate is the key to the success of their community, an agricultural cooperative called Oñoirũ made up of some 130 families. Vega and Bustamante helped found the unique community, nestled in a rural part of southeastern Paraguay called “Kilometer 47,” with their four children in the 1970s. The region is part of what is called the Southern Cone — spanning southern Paraguay, northern Argentina, and western Brazil. It’s the only place on Earth — despite failed efforts — where the tree that yerba mate comes from, a kind of holly, is successfully cultivated. Known to botanists as Ilex Paraguariensis, the tree is native to South America.

In landlocked Paraguay, farming offers a way out of poverty — at a cost. These are the stories of the people living at the frontlines of our global food supply chain. Read more.

A gift and curse

Yerba mate’s roots in indigenous Guaraní culture are obscured today by the rapidly expanding industry of yerba mate. The drink has similar caffeine content to coffee, but some studies suggest it has a higher antioxidant quotient than green tea. It also boasts a solid number of vitamins and minerals, albeit in small doses. Other studies suggest yerba mate has other protective effects, including as an antimicrobial.

“The knowledge of how to prepare yerba mate is a gift passed on to us from Mother Nature,” says Bustamante as she fills a gourd with dried yerba and then nails down an alpaca straw (a bombilla) into the crushed, roasted, and dried leaves and twigs.

“Yerba mate became the gift of nature that cursed the Indigenous peoples.”

She and Vega sit in the pre-dawn gloam inside their dark kitchen as we speak. It’s a cold winter morning — the kind of morning one craves a hot brew to start the day. As the water comes to a boil, Bustamante takes the kettle from the fire and pours it into a thermos, before pouring some into the prepared yerba mate gourd. She takes a sip, adjusts the straw, and sips once more before handing the gourd to her husband.

The steam from the hot brew lingers between them. Drinking yerba mate this way — from a shared gourd — is a cultural, social, and timeless ceremony.

Still, yerba mate — rich in caffeine; choline; iron; sulfur; and vitamins A, B1, B2, B3, and B5 — plays a large part in landlocked Paraguay’s bloody history.

“In many ways, yerba mate became the gift of nature that cursed the Indigenous peoples,” says Vega.

Before the arrival of European colonizers, indigenous Guaraní tribes consumed the leaves and twigs from a sacred plant they called ka’a. In the 1600s, Jesuit missionaries recorded the Guaraní’s technique of cultivating, drying, roasting, and processing Ilex Paraguariensis, the plant’s Latin name.

Before long, yerba mate became a vital export for the Spanish colonial apparatus and a trendy drink in the salons of Paris, Lisbon, and Madrid. In Paraguay, it became a surrogate currency due to the lack of metal coins. When Paraguay became an independent nation in 1811, its economy depended heavily on yerba mate production — labeled as “Paraguay’s green gold.”

“When you study the history of Paraguay, you realize that there’s only a tiny window of about 30 years that is a source of inspiration,” says Vega, referring to the rule of José Gaspar Rodríguez de Francia between 1814 and 1840. Despite de Francia’s authoritarian rule, the leader remains remembered for his collectively run and administered agriculture and cattle farming among subsistence farmers in Paraguay’s rural areas.

The War of the Triple Alliance in the 1860s crippled Paraguay’s economy due to its substantial war debts to Argentina and Brazil and cost the young country two-thirds of its population. The ensuing large-scale privatization of arable lands shattered the country’s position as the world’s leading yerba mate producer. Ultimately, the “Great War,” as the conflict is remembered in Paraguay today, helped lay the foundations of its current political and financial climate — the nation is one of South America’s most unequal states in terms of land distribution, wealth inequality, and poverty.

Member-driven associations such as Vega and Bustamante’s community, Oñoirũ, is a response to these failings. Most of Oñoirũ’s members arrived at “Kilometer 47” after being promised land during the dictatorship of Gen. Alfredo Stroessner, which lasted from 1954 to 1989. These “tierras malhabidas,” or “ill-gotten lands” have largely ended up in the hands of agribusiness, Brazilian soy farmers, and personal friends and allies of Stroessner.

“Stroessner turned Paraguay into a private colony for Brazilian soy farmers,” says Vega. “When we arrived here, large squats of land had already been obtained by the soy industry and were a part of Paraguay’s soybean bonanza. It was a monocrop landscape, and that’s why sustainable cultivation of yerba mate has become even more important as it offers an alternative and shows people that a sustainable lifestyle is possible out here.”

A pale Sun brings warmth on the first morning of the annual yerba mate harvest. It’s a collective gathering that involves the entire community, and the harvest always starts at New Moon.

“When it’s New Moon, the soil is ready to let go,” explains Bustamante. “Then the Earth is ready to share.”

Oñoirũ’s headquarters buzzes with energy and expectations. People stride in and out of the main office and the storage room where sacks of dried yerba mate await departure for local markets and distributors. There are gourds filled with yerba next to thermoses on every available surface. Many are decorated with stickers and soccer team logos.

An outdoor oven, called tatacuá in Guaraní — Paraguay’s official language alongside Spanish — is lit and bags of rice and vegetables are stacked against the wall ready for a communal lunch to celebrate the harvest.

A group of men climb into trucks and cars. They carry hedge shears, straw bags, and work gloves. The vehicles set out together for the fields, where the sacred ka’a tree awaits picking. The men work quickly, moving along lanes between the trees.

“I win, I win!” shouts Edmundo Rodríguez, as he dashes over to the truck with a filled bag of collected yerba — the first one during the 2022 harvest. His fellow pickers smile and let the middle-aged man enjoy his moment in the Sun.

“We’re locked in behind soy fields that pollute our waters and kill us off with pesticides.”

Every leaf picker hacks, picks, and gathers around 175 pounds of yerba. The leaves are collected in a bag and loaded onto a waiting truck. Every bag secures the leaf picker $3.50.

Leaf pickers’ salaries depend on market prices and global inflation trends. But the yerba mate industry also is marred by and somewhat depends on child labor and debt slavery. Social injustice runs deep in the industry: In the early 1900s, yerba plantations run by wealthy landowners exploited the local peoples for cheap labor, forcing pickers to live in abysmal quarters where they often went hungry and suffered disease outbreaks. Today, wealth inequality still mars the industry, but in collectives like Oñoirũ, the conditions are at least more humane.

Oñoirũ’s harvest of yerba mate is a drop in the ocean of Argentina, Brazil, and Paraguay’s collective annual production of 500,000 tons. That figure may soon grow — the Covid-19 pandemic saw an increase in yerba mate drinking across the Western world, especially as companies like Red Bull marketed the beverage’s purported health benefits with products like Red Bull’s “Organic Viva Mate.” Companies Perrier and Nestlé have even started producing bottled water that contains “yerba extracts.”

At a time when more people discover yerba mate, the only limit seems to be an endless sky — but there is another problem that holds back the industry. Standing at the heart of a yerba mate field surrounded by genetically modified soybean plantations, it is easy to see the issue. Near the Oñoirũ fields, there are some dusty-looking plots where genetically modified soy is grown.

The industrialization of soy in Paraguay means the cultivation of Ilex Paraguariensis is sequestered to tiny pockets of land in a region that is also profoundly affected by climate change and soil degradation due to G.M.O. crops.

“The Stroessner dictatorship turned Paraguay into one huge prison — today, despite being a democracy on paper, we’re locked in behind soy fields that pollute our waters and kill us off with pesticides,” laments the yerba farmer Vega.

“People around here know what poverty looks like; we’ve all stared right down into its abyss,” says Vega. But today, the farmers can at least celebrate the riches they do have: A bountiful yerba harvest and a reminder of their shared Paraguayan identity.

Rice, vegetables, and potatoes are served with chicken and pork at the communal lunch back at Oñoirũ’s headquarters. Later, Vega and Bustamante share a tereré, a cold cup of yerba mate sometimes infused with other herbs, and they recall their lives before Oñoirũ amid the Stroessner dictatorship.

Free speech was non-existent, and any opposition to the regime was met with brutality and force. But still, every day in the dawn light, people like Vega and Bustamante made fires to boil water and prepared gourds with yerba twigs and branches — a small ritual that meant much more.

“Yerba mate offered a glimpse of normalness for us,” says Vega. “It reminded us of who we are.”

“It was the only time you were truly free,” says Bustamante.

This is part one in a three-part series: The Killing Fields.

To Ireno Vega and his wife, Zulma Chávez Bustamante, the existence and knowledge of how to grow and prepare yerba mate, an ancient Guaraní tea, represents more than a means to make a living. “It means survival,” says Vega, a 60-year-old subsistence farmer with a wind-whipped face and a Hemingway beard. “And hope.” Yerba mate…

To Ireno Vega and his wife, Zulma Chávez Bustamante, the existence and knowledge of how to grow and prepare yerba mate, an ancient Guaraní tea, represents more than a means to make a living. “It means survival,” says Vega, a 60-year-old subsistence farmer with a wind-whipped face and a Hemingway beard. “And hope.” Yerba mate…

In Paraguay, cows offer a way out of poverty — and perhaps a greater peril