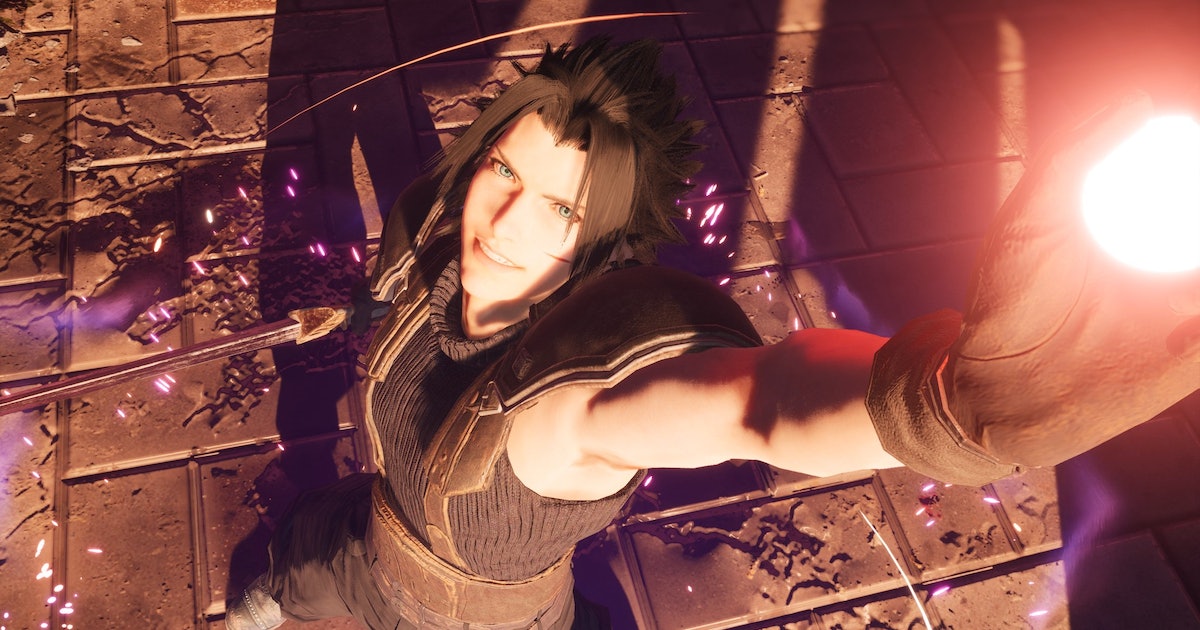 I knew what was coming.

But that didn’t stop me from breaking down and sobbing like a baby at the end of Crisis Core Reunion.

Originally released on the PSP in 2007, Crisis Core is a prequel to Final Fantasy VII set seven years earlier. The story follows SOLDIER 2nd-class Zack Fair as he learns more about the workings of the Shinra Corporation — and the hideous experiments that lead to the events of FF7.

Crisis Core Reunion doesn’t alter the story of the original PSP game, but it lands somewhere between a remaster and a remake on account of its gorgeous graphical updates and gameplay improvements. That being said, the limitation of the original game being on a handheld still shines through, becoming obvious through the game’s simple structure that uses mostly small confined environments and linear pathways. For anyone coming from the tremendously ambitious Final Fantasy VII Remake, Crisis Core is going to feel remarkably limited.

Who would you rather date: Cloud or Zack? Let us know!

Zack shines as the star of the show with a kind of vibrant genuineness to his character that you simply don’t find very often, let alone in the world of FF7. He’s a kind and all-loving hero who simply wants to do the right thing — and his undeniably flirty side gives him just a bit of an edge. He’s the ultimate contrast to the more dour and serious Cloud, who’s clearly influenced by the more excitable SOLDIER after the two characters meet.

Crisis Core doesn’t feel needlessly long and drawn out, but manages to establish high stakes and drama right from the outset. Fans of FF7 will know Zack’s fate, which adds a bittersweet layer to the entire experience. It culminates in an utterly unforgettable ending sequence that’s easily the best of the entire Final Fantasy franchise.

The visual upgrades also enhance the overall emotional impact of the story. While some character animations can look awkward at times, by and large, Crisis Core Reunion is gorgeous. Environments look phenomenal, and it’s great to see some of the iconic locations from FF7, like Gongaga and Nibelheim, realized in gorgeous modern graphics.

While the content of the story and cutscenes are the same as the PSP version, subtle changes in lighting and animation help make the overall package even tighter, like Cloud looking directly at Zack in one especially memorable scene, instead of looking at the ground. The new voice cast also enhances the drama of the story, and Zack’s new actor (Caleb Pierce) really hones in on the character’s “innocent puppy” persona.

While the visual upgrade is phenomenal, the overall gameplay and structure of Crisis Core are where the cracks start to show, ultimately revealing that the game is held back somewhat by its handheld origins.

Crisis Core is a very linear game, and its beautiful environments all feel exceedingly small and limited. Between the main story “missions,” you’ll return to Midgar and run around Sector 8 and the slums, learning a bit more about the city, its inhabitants, and Shinra. It’s worth taking the time to explore as you can complete side quests that unlock valuable equipment, and uncover some fun little bits of lore and dialogue. A highlight here is the fan clubs for the first-class SOLDIERS, which will send you emails with hilarious details on the characters, like Sephiroth’s hair-care routine.

The rest of Crisis Core’s side content largely takes the form of bite-sized missions that generally have you traveling down a single path and fighting enemies. There are quite literally hundreds of these missions, and while some have a little bit of story, they largely start to feel like redundant fetch quests. It would have been nice to see a bit more depth and differentiation in this optional content for the remaster, and it feels like a missed opportunity, albeit a small one.

The drastically improved combat system of Crisis Core Reunion helps to smooth out the overall experience, which now feels very in line with that of Final Fantasy VII Remake. Combat encounters still happen in small contained arenas, but Zack’s moveset has been drastically improved.

In the PSP version, everything was mapped to one bar that you had to use the triggers to scroll through. In Crisis Core Reunion, materia and abilities are now mapped to a series of six shortcuts. Meanwhile, you have a toolbar for items and can swap between these at any time.

These changes make the combat feel much more vibrant and fast-paced. There’s also a “crunchiness” to fighting that wasn’t there before, as Zack’s attacks with the massive Buster Sword now have more heft and impact, making them feel much more satisfying.

Crisis Core is known for its love-it-or-hate-it combat gimmick called Digital Mind Wave (DMW). Slot reels featuring major characters constantly spin on the top-left, and when they line up, Zack can use a special Limit Break Attack. The numbers next to each character can also trigger special effects like stat boosts to increase critical hits or block magical damage.

In Reunion, you can skip the cutscenes that play when the reels line up, which makes the system feel more streamlined and less intrusive. Preserving and enhancing this unique luck-based system makes for an exciting bit of randomness that forces you to adjust your strategy on the fly.

There are still a few wonky features that Square Enix should’ve tweaked for this rerelease. Leveling up is still extremely obtuse, as Zack gathers XP from every enemy, but the game doesn’t show you exact amounts. You can only level up when the slots all read “7” during combat, but there’s absolutely no way to tell when, how, where, or why it happens. Randomness can be fun in games, but not when it comes to progression.

Though I would have liked to see Square Enix make more drastic changes to the overall formula, Crisis Core has never looked or felt better to play. Zack’s story is gripping, hopeful, and emotionally devastating. So despite a few minor flaws, Crisis Core Reunion feels like “essential reading” for anyone interested in Final Fantasy VII and the ongoing Remake project.

I knew what was coming. But that didn’t stop me from breaking down and sobbing like a baby at the end of Crisis Core Reunion. Originally released on the PSP in 2007, Crisis Core is a prequel to Final Fantasy VII set seven years earlier. The story follows SOLDIER 2nd-class Zack Fair as he learns…

I knew what was coming. But that didn’t stop me from breaking down and sobbing like a baby at the end of Crisis Core Reunion. Originally released on the PSP in 2007, Crisis Core is a prequel to Final Fantasy VII set seven years earlier. The story follows SOLDIER 2nd-class Zack Fair as he learns…