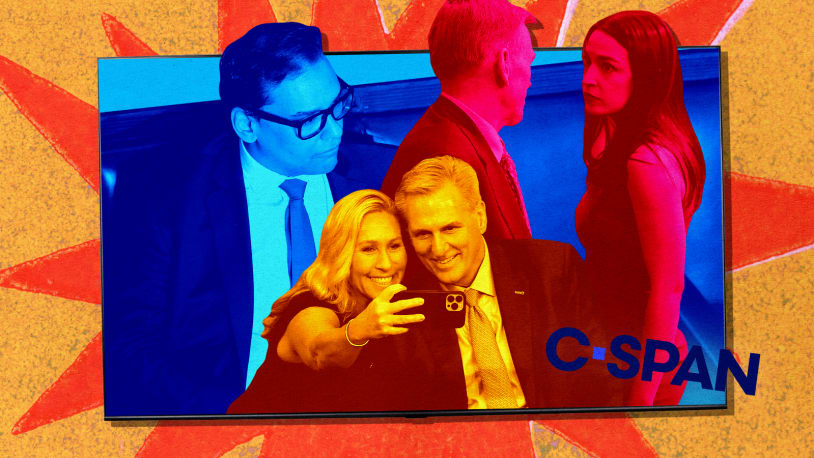 C-SPAN finally showed what really goes on in Congress. Can we keep it?

House Speaker Kevin McCarthy (R-Calif.) finally won his long-coveted gavel Friday night on the 15th vote, but it cost him a great deal of dignity and much of his new power. Democrats got to enjoy nearly a week of McCarthy’s repeated humiliations, but now they have to contend with a group of empowered, hard-right House rabble-rousers who plan to put Democrats and federal investigators on trial and hold America’s credit rating hostage.

There was at least one undisputed winner in this shambolic week of House leadership chaos, however: C-SPAN.

The nonprofit cable TV consortium’s ratings shot through the roof as the week dragged on, according to TV viewership counters Nielsen and Samba TV. That was due in part to the drama of the historically drawn-out speaker’s race, certainly, but also because C-SPAN was able to really show what was happening on the House floor, temporarily. Here’s a look at what C-SPAN let us see, why that’s important, and whether there’s any chance we can keep C-SPAN unleashed:

How was C-SPAN different during the speaker votes?

Since its founding in 1979, C-SPAN (Cable-Satellite Public Affairs Network) has dutifully covered the day-to-day workings of Congress, but it carries out this public service under pretty strict ground rules. The leaders of the House and Senate control the cameras and government employees operate them.

In the House, the House Recording Studio feeds video to C-SPAN and other media outlets, Ben O’Connell, C-SPAN’s director of editorial operations, tells Slate. “When the government-operated cameras are going, they operate under strict guidelines: They can show wide shots, and they can show the person speaking, and that’s it. They can’t show reaction shots. They can’t show people in the back of the chamber chatting with one another or sitting in the seats speaking with one another.”

On certain occasions, like State of the Union Addresses, joint sessions, and elections of House speakers, independent cameras are allowed on the House floor. In this case, former House Speaker Nancy Pelosi (D-Calif.) gave C-SPAN permission to use its own cameras for the opening day of the 118th Congress, C-SPAN Capitol Hill producer Craig Caplan tweeted, but that typically uneventful day lasted all week.

With no House speaker or House rules in place, C-SPAN kept its cameras rolling where it pleased. It was “C-SPAN gone wild,” Ben Jacobs writes at New York.

What did this freewheeling C-SPAN capture?

“Loud booing,” The Washington Post reports. “Animated conversations in the aisles of the House chamber. Sleeping children. Lawmakers scrolling on their phones.” It all “made for riveting television, at least by that network’s normal production standards, which veer more toward vintage Soviet broadcasts than toward Real Housewives or the NFL on Fox,” Bruce Handy writes at The New Yorker.

Watching “the House in all its befuddling glory” was “the best thing on TV,” Karen Heller assesses at the Post. “Zooms and tracking shots! Close-ups and wide shots! … It was positively Spielbergian.”

Thanks to C-SPAN’s liberation, “we watched serial fabulist George Santos portray Charlie Brown in the back row” and “far-right firebrand Paul A. Gosar gab with liberal icon Alexandria Ocasio-Cortez, the former censured two years ago for posting an animated video of him killing her,” Heller adds. One lawmaker was captured “surreptitiously vaping inside the House,” and “wherever the camera looked, there was Marjorie Taylor Greene, even sitting with Santos Thursday.”

In one scene that caught even “career-long observers of Congress” by surprise Friday night, the House “descended into chaos when two lawmakers nearly came to fisticuffs,” Politico reports. “Rep. Mike Rogers (R-Ala.) lunged at Rep. Matt Gaetz (R-Fla.) and had to be pulled away by Rep. Richard Hudson (R-N.C.),” after Gaetz blocked McCarthy in the 14th round of voting. C-SPAN’s cameras captured the scuffle, if not the words exchanged.

The whole week was as if C-SPAN “found itself in the happy position of a wedding videographer at a ceremony that has gone horribly but amusingly awry,” The New Yorker‘s Handy writes.

Did the lack of audio ruin the drama?

Some fans would have preferred an audio feed, too. “I love the shots on the new ‘looser’ C-SPAN. It’s kind of like C-SPAN after hours,” Veep showrunner David Mandel told The New Yorker. “Sadly, there is no sound. We need everyone miked like an NFL game.”

But having candid or contentious confrontations on camera without the audio has its own kind of dramatic beauty. It allows you to use your imagination — or let other people imagine for you.

C-SPAN’s O’Connell expressed specific appreciation for Bad Lip Reading, which literally puts words in the lawmakers’ mouths. Was the real Gaetz-Rodgers-McCarthy fight better than this?

Or Ocasio-Cortez’s curious chat with Gosar?

Can we keep this new C-SPAN?

In that House, that’s now up to McCarthy and his party. O’Connell said he hopes C-SPAN can do this more often. “We’d love to be able to show the negotiating happening on the floor, rather than just the wide shots and the speeches,” he told the Journal. This kind of coverage is “really speaking to viewers,” O’Connell told the Post. “It’s helping to tell the story of this speaker election. Now, imagine if we were able to do that when there’s a major piece of legislation.”

At least one Republican lawmaker agrees. “What the American people were able to see unfold on the floor was a good thing for our democracy and our republic,” Rep. Chip Roy (R-Texas) told CNN’s Jake Tapper on Sunday, two days after McCarthy’s victory. “It was a good thing for people to be able to see the inner workings,” to “see some of the stuff we got to see this week.”

“I mean, if you’re gonna have cameras there, let’s look at the action,” Roy added. He said he would “go look into the ins and outs of all of all that.”

Cameras are like catnip to many — probably most — members of Congress. And “lawmakers would be wise to allow” C-SPAN’s more engaging camera work “permanently if they want better ratings,” Bloomberg‘s Erik Wasson tweeted. On the other hand, “if you are a senator or a representative who doesn’t want to be spotted doing Wordle instead of the people’s business,” Handy writes at The New Yorker, you probably like the status quo.

Should we keep this new C-SPAN?

You could certainly make a strong case that turning congressional votes into must-see TV would be an important civic project. “In a way, the American people have benefited from the past few days by seeing members of Congress in candid moments and conversations,” Nielsen spokesman Howard Mortman told The New York Times. “This past week has been an intensive civic education in how Congress operates, and the American people can see it all for themselves.”

“My favorite part of the mass reaction to our coverage is that it’s happening,” C-SPAN’s O’Connell tells Slate. “I would love it if Americans watched this, saw how engaging it was, and started telling their members, ‘I want to see that when a major piece of legislation is on the floor, I want to feel like I’m in the room, I want to have more transparency into the lawmaking process,” which is, I think, what that would provide.”

January 10, 2023 January 10, 2023 House Speaker Kevin McCarthy (R-Calif.) finally won his long-coveted gavel Friday night on the 15th vote, but it cost him a great deal of dignity and much of his new power. Democrats got to enjoy nearly a week of McCarthy’s repeated humiliations, but now they have to contend with a…

January 10, 2023 January 10, 2023 House Speaker Kevin McCarthy (R-Calif.) finally won his long-coveted gavel Friday night on the 15th vote, but it cost him a great deal of dignity and much of his new power. Democrats got to enjoy nearly a week of McCarthy’s repeated humiliations, but now they have to contend with a…

Did hunter-gatherers have a writing system?

2023 North American Leaders’ Summit: Will progress be made between the U.S., Canada, and Mexico?