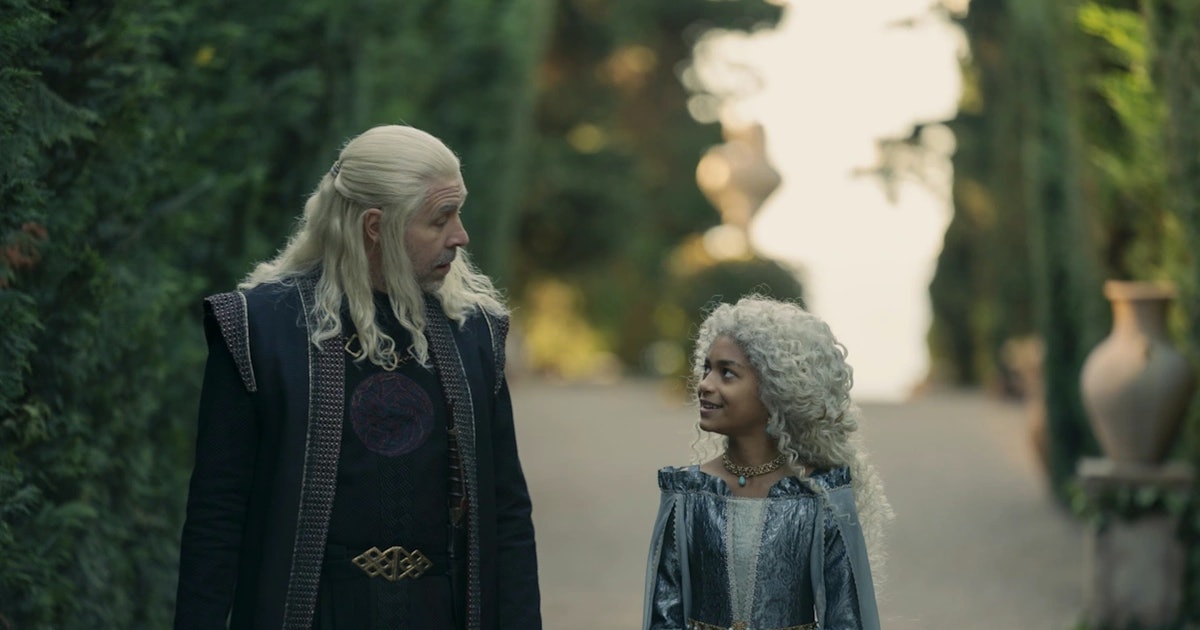 Who does Daemon marry next? ‘House of the Dragon’ Episode 5 sets up another twist

Lady Rhea Royce, we hardly knew ye. Prince Daemon Targaryen’s mysterious wife, whom he so sweetly nicknames the “bronze bitch” of the Vale, was finally revealed to House of the Dragon viewers early in Episode 5.

Unfortunately for Rhea, House of the Dragon decided to do something rather unusual for the book-to-screen adaptation of George R.R. Martin’s A Song of Ice and Fire prequels — go against the source material. In The Rogue Prince and The Princess and the Queen, Rhea’s death is untimely, but natural. She simply suffers a horseriding accident.

The HBO series takes a different approach. Puffed-up with rage over being booted from King’s Landing (again) and being unable to wed his niece, Princess Rhaenyra Targaryen (Milly Alcock), Daemon (Matt Smith) rides home to his first wife, the head of House Royce and the heir to Runestone in the Vale of Arryn. Rhea (Rachel Redford) catches him amid a tantrum he’s throwing over King Viserys I Targaryen’s (Paddy Considine) treatment of him and, within minutes of viewers meeting her, Daemon murders her.

Though Daemon is technically exiled from King’s Landing for grooming his niece and almost “stealing her maidenhood,” he’s invited to return to attend Rhaenyra and Laenor Velaryon’s wedding banquet. Surrounded by the bloodshed and chaos that breaks out as a result of a grotesque fight between Ser Criston Cole (Fabien Frankel) and Joffrey Lonmouth (Solly McLeod), Daemon appears to only have eyes for one young woman, and this time it isn’t his niece. It’s Laena Velaryon (Savannah Steyn).

If House of the Dragon continues to (mostly) follow A Song of Ice and Fire prequel canon, the teenager he flirts with will become Daemon’s second wife.

Who is Lady Laena Velaryon?

In Episodes 1 and 2 of House of the Dragon, little Laena Velaryon (Nova Foueillis-Mosé) is the cause of significant tension among House Targaryen and House Velaryon, as the 12-year-old was presented as a potential match to the king upon the death of Queen Aemma Arryn (Sian Brooke). But Viserys disregarded Lord Lyonel Strong’s (Gavin Spokes) advice to unite the two noble Old Valyrian families, and instead asked Queen Alicent Hightower (Emily Carey) for her hand in marriage. This betrayal inspires Corlys to plot with Viserys’ brother, Daemon, convincing him to fight alongside House Velaryon in the Stepstones. The two remain chummy after their victory against the Crabfeeder and his Triarchy armies.

In the prequel novellas, the amicable relationship between Daemon and Corlys is what brings Daemon face-to-face with Laena, who’s grown into a powerful dragonrider. When Daemon and Laena meet, she’s 23 and betrothed to a spoiled son of the Sealord of Braavos. There are hints that Daemon actually fell in love with Laena, but also that he may have only wanted to claim her to further his ambition. Either way, he challenges Laena’s fiancée to a duel and kills her betrothed. Laena and Daemon marry soon after.

Laena and Daemon were a power couple, and their marriage was celebrated by nearly all of Westeros and Essos — except for King Viserys and his court, who considered it another sign of Daemon’s disrespect. One of Laena and Daemon’s strongest supporters was Rhaenyra, who became close friends with them. Later, Laena and Daemon’s twin daughters were betrothed to Rhaenyra’s two eldest sons.

Does Daemon finally settle down, become a true prince charming, and get his happily ever after? You’ll have to keep watching to find out… or you can make an educated guess.

The official House of the Dragon trailer gives us quick glances of the Velaryons, including Laena.

The Inverse Analysis — Considering House of the Dragon has stayed close to its prequel roots for the majority of its run, and that Nanna Blondell has been confirmed to portray an adult Laena Velaryon, we’re pretty certain we’ll see Daemon and Laena tie the knot. This will probably happen in Episode 6, when the show’s risky time jump of over a decade occurs. That also means we could get our first look at Laena’s dragon, Vhagar. A possible romantic flight across the Seven Kingdoms’ skies? We can’t wait.

House of the Dragon Episode 6 airs on Sunday, September 25 on HBO.

Lady Rhea Royce, we hardly knew ye. Prince Daemon Targaryen’s mysterious wife, whom he so sweetly nicknames the “bronze bitch” of the Vale, was finally revealed to House of the Dragon viewers early in Episode 5. Spoilers ahead! Unfortunately for Rhea, House of the Dragon decided to do something rather unusual for the book-to-screen adaptation…

Lady Rhea Royce, we hardly knew ye. Prince Daemon Targaryen’s mysterious wife, whom he so sweetly nicknames the “bronze bitch” of the Vale, was finally revealed to House of the Dragon viewers early in Episode 5. Spoilers ahead! Unfortunately for Rhea, House of the Dragon decided to do something rather unusual for the book-to-screen adaptation…