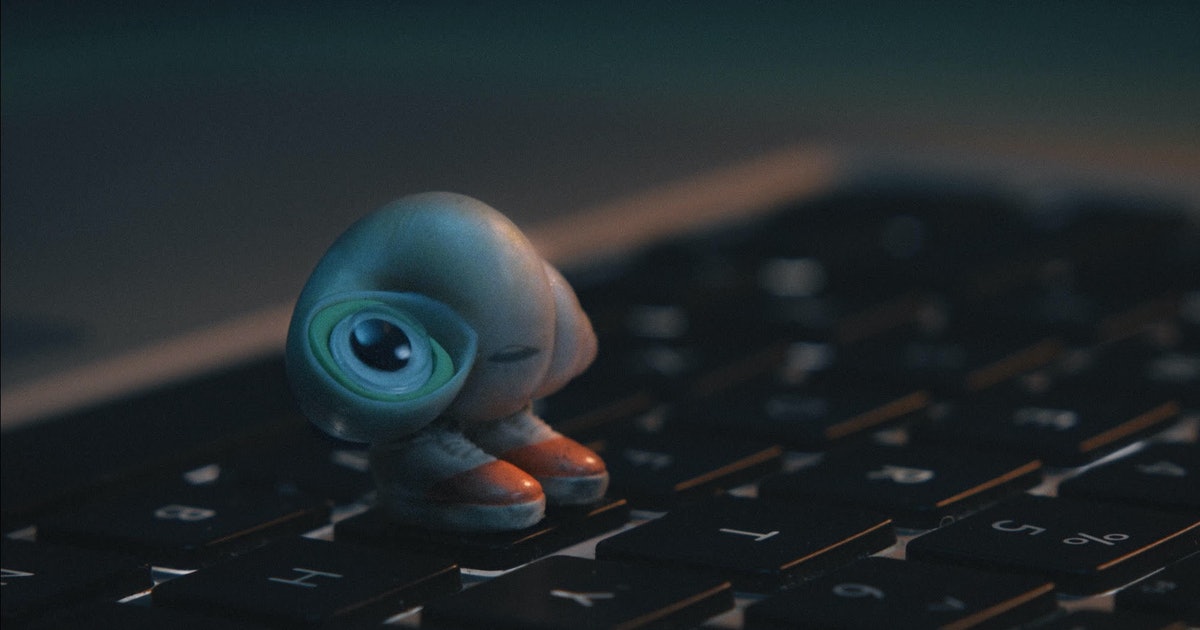 How ‘Marcel the Shell’ invented “never been done before” stop-motion

For director Dean Fleischer Camp, a monumental challenge came in a tiny package.

“The main thing that I was worried about, and wanted to accomplish, was to make a movie that felt like an organic documentary within this stop-motion world,” Camp tells Inverse about Marcel the Shell With Shoes On, out now in theaters from A24.

“That’s oil and water. Those two processes are so different. So there was a ton of thought put into how to execute.”

Marcel, a seashell with an outsized wit whose world is a quiet suburban home, is no bigger than a quarter. Voiced by Jenny Slate, Marcel was created in 2010 for a Brooklyn comedy show and wound up an internet darling.

Now Marcel leaps to the big screen in a mockumentary that mixes live-action with stop-motion animation. The movie follows an indie filmmaker (Camp) who finds Marcel (Slate) and his grandmother (Isabella Rossellini) at his Airbnb. As Camp captures Marcel’s story, and his obsession with 60 Minutes, the little guy goes viral on the internet, inspiring Marcel to search for his missing family.

Despite looking like a tender film with a lo-fi design (Marcel’s face is a single googly eye), the movie was only made possible after a process overseen by animation supervisor Kirsten Lepore.

Stemming from its incongruous blend of cinema verité (a French term referring to the authenticity and spontaneity of the camera, and the action it captures) and stop-motion animation (an involved, meticulous process of moving things a frame at a time), Marcel the Shell With Shoes On may be one of the most technically complicated movies in theaters, even compared to the likes of Top Gun: Maverick and Jurassic World: Dominion.

“What we were wanting to do had never been done before.”

“I always had a sense it was going to be complex,” Lepore says to Inverse. “What we were wanting to do had never been done before. There are no [comparisons] for a tiny, stop-motion character an inch tall playing against real humans and dogs.”

The closest movie the filmmakers could reference for their work was the 2001 bomb Monkeybone, but even that wasn’t a perfect model. “I knew we were gonna build this process from the ground up,” Lepore says.

The filmmakers took a two-step approach. First, they gathered all the live-action footage. Then the animation — and how to film it — went through iterative trials.

“We spent about a year testing,” Lepore says, most of which “didn’t end up working out.”

“Dean wanted naturalistic handheld stuff, and every test I showed him that was a locked camera with a digital handheld effect was not going to cut it. We knew we needed to make it look as real and practical as possible.”

“You can simulate handheld movement if there’s no parallax movement on the character,” Camp says. “You can fudge it. But I was really dedicated to not limiting ourselves, to make a movie that felt as intimate and dynamic as a real documentary.”

In layman’s terms, parallax is the visible difference of speed that elements in the background move at, or appear to move at, versus objects in the foreground. Think of how it looks like when you drive on a highway. The mountains or city skylines move slow and steady, but signs on the road whizz by. In animation, parallax helps create visual depth, such as in side-scrolling video games.

For Marcel the Shell, moments of parallax — when Marcel moves on his little scale in contrast to full-size human beings moving normally — posed a tremendous challenge.

“We had to meticulously plan everything.”

In shots with parallax, the filmmakers utilized a motion control rig that allowed the animators to replicate the spontaneous movement of the camera during live-action filming.

This data was fed into their computers during animation, essentially allowing the animators to work with the “same” camera. This meant they could accurately animate Marcel in stop-motion without compromising the feel of the documentary style. Some more help came from Eric Adkins, the movie’s stop-motion cinematographer, who hired artists to recreate the physical sets as 3D models for the animation team to work in.

“We did go a ways in developing an attachment to the camera that can record coordinates, so you can be handheld when shooting live-action,” Camp says. “When you get to the animation stages, you can feed that data into a motion control rig and it can recreate the movement perfectly.”

It’s an elegant solution, but the filmmakers had another problem: The art of stop-motion itself.

“Stop-motion is a pretty old craft,” Camp says. “A lot of the tools have not been updated since the ‘80s. The motion control rig on every stop-motion stage runs on like a floppy disk. There’s a lot of new tools, but the hardest part is getting them to interface with archaic machinery.”

“We had to meticulously plan everything and pick and choose our simpler shots,” Lepore says.

It was a lot of innovation and craftsmanship for something small and, as Camp reveals, spontaneous.

“It started because a friend asked me to make a video for his comedy show,” Camp says on Marcel’s origins in 2010. Days before the show, Camp was splitting a hotel with friends for a wedding. One of them was actress and comedian Jenny Slate, who’d just wrapped a brief stint on Saturday Night Live. “Jenny started doing this teeny voice to express how cramped she felt,” Camp says.

“I ran to the craft store and grabbed googly eyes and a box of shells.”

With the show approaching, Camp interviewed Slate doing improv and quickly created a character. “I ran to the craft store and grabbed googly eyes and a box of shells, just trying to create a little character, and animated and edited and screened all within 24 hours,” he says.

Knowing the video would screen to twenty-something Brooklynites, Camp had no idea what the reception would be.

“There was a weird moment where it felt like the temperature in the room changed,” he says. “It was a hip art crowd, and everyone seemed to have their hearts melted.”

After the show, Camp uploaded the video to YouTube, where it’s amassed over 32 million views. After two online sequels, Marcel finally has a movie with an actual story, rather than a montage of non-sequiturs. This turned out to be a challenge as daunting as making Marcel move.

“The language of documentary is more compassionate than a polished movie.”

“With the shorts, we’re just doing jokes. You’re not telling a story,” Camp says. “A feature requires so much orchestration. The challenge for me was to tell a story that was emotionally ambitious without losing the rough edges of those original recordings.”

That explains Camp’s dedication to the documentary feel. “What’s magical about Marcel is that he’s absurd. The way I and the film treat him is as if he’s any other documentary subject. The language of documentary is more compassionate than a polished movie.”

Marcel the Shell With Shoes On mirrors Marcel’s real-life viral fame via the YouTube shorts, although Camp, Slate, and co-writer Nick Paley had to make adjustments for 2022.

“We had to think a lot about the way we were portraying viral fame because it has changed so much,” he says. “I don’t know if it’s because I was a young artist around then, but I mourn the internet of 2010. It was democratic. Now it’s set up so that if something becomes popular, it benefits the platform more than the artist.”

“I used to teach at CalArts, and I would about how to market yourself in the internet. I started to realize after two years that lecture was obsolete,” says Lepore. “All of the platforms were different. I think there’s still funny water cooler things that have their moment, but maybe things are a little more disposable now.”

Camp and Lepore both still enjoy silly internet content, and to some degree they believe a sensation like Marcel the Shell can emerge again. But they’re unsure what authorship means anymore. “[The internet] gave a launchpad to a lot of us. I don’t know that it would in the same way now,” Camp says. “I could be wrong, but I feel like Marcel wouldn’t go viral now.”

Marcel the Shell With Shoes On opens in theaters on June 24.

For director Dean Fleischer Camp, a monumental challenge came in a tiny package. “The main thing that I was worried about, and wanted to accomplish, was to make a movie that felt like an organic documentary within this stop-motion world,” Camp tells Inverse about Marcel the Shell With Shoes On, out now in theaters from…

For director Dean Fleischer Camp, a monumental challenge came in a tiny package. “The main thing that I was worried about, and wanted to accomplish, was to make a movie that felt like an organic documentary within this stop-motion world,” Camp tells Inverse about Marcel the Shell With Shoes On, out now in theaters from…

15 years ago, Michael Bay made the most overrated sci-fi movie of the century