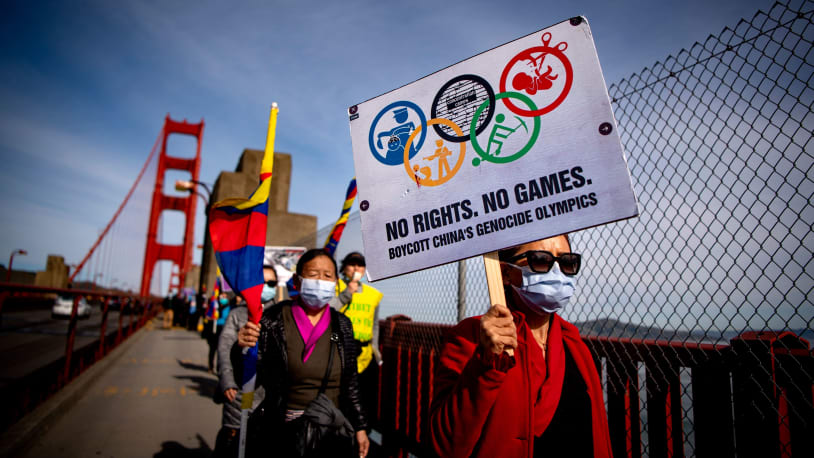 Why is the U.S. boycotting the 2022 Winter Olympics?

Beijing’s Winter Olympics begin this week under the shadow of COVID and China’s flagrant abuses of human rights. Here’s everything you need to know:

How is Beijing preparing?

The 2022 Winter Games will take place in a “closed-loop system,” or bubble, to prevent the spread of the coronavirus — a similar but more stringent version of the protocols utilized by last summer’s Tokyo Olympics. Thousands of athletes, coaches, Olympic staff members, and journalists will be confined to an enclosed network of competition sites and hotels for the duration of the Games. Everyone must be vaccinated or go through three prior weeks of isolation, and athletes will be tested daily. China has operated under an extreme “COVID zero” policy since the first cases were detected in Wuhan, quarantining tens of thousands of people and testing millions in response to a single case. Thus far, it’s been successful in limiting outbreaks: China has reported roughly 4,600 deaths, compared with nearly 900,000 in the U.S. But the Omicron variant has caused small outbreaks in Beijing and presents a new challenge. Olympic events will be held in Beijing and the cities of Yanqing and Zhangjiakou, northwest of the capital.

Who are the star U.S. athletes?

The U.S. is sending 223 athletes to the Games. Alpine skiing superstar Mikaela Shiffrin will look to add to her two previous gold medals and cement her status as a legend of the sport. Chloe Kim, who at 17 won gold in the halfpipe at the 2018 Pyeongchang Games, will return and is favored to repeat as champion. Snowboarders Lindsey Jacobellis and Shaun White will become five-time Olympians when they compete in Beijing, as will curling legend John Shuster and Katie Uhlaender in skeleton. The Games will see the debut of seven new events, including the “monobob,” a solo women’s bobsled competition; three-time bobsled medalist Elana Meyers Taylor will be a top contender. Beijing is 13 hours ahead of U.S. Eastern time, so American viewers will see the opening ceremony and other “live” events with their morning coffee.

Why was Beijing chosen?

China was originally one of many contenders to host the 2022 Games, but Poland, Ukraine, and Sweden dropped out because of domestic opposition. Norway’s bid collapsed over public outrage at the International Olympic Committee’s demands for luxury treatment, such as special lanes on all roads for IOC members. China and Kazakhstan wound up as the only two bidders left. The IOC’s selection process now has a built-in bias for autocracies willing to pamper IOC members and build expensive venues — without inconveniences such as democratic approval. China displaced 1.5 million people when Beijing hosted the 2008 Summer Olympics, and the 2022 announcement spurred a rush for developers to snap up properties in humble mountain towns, forcing longtime residents to move. Beijing and its environs receive little natural snowfall, so organizers have had to make artificial snow for outdoor skiing events. China’s brutal persecution of its Muslim Uighur minority and dismal human rights record has led to widespread comparisons between these Games and the 1936 Berlin Olympics and 1980 Moscow Olympics, both of which sparked global controversy and boycotts.

Will there be any boycotts?

The U.S., U.K., Australia, and several other countries have announced “diplomatic boycotts,” meaning they will not send government officials but will let their athletes participate. “We will not contribute to the fanfare of the games,” White House press secretary Jen Psaki said. No country has announced a boycott of the athletic competitions. Olympic corporate sponsors such as Procter & Gamble, Intel, and Airbnb have chosen to do low-key ads focusing on U.S. athletes rather than withdraw —- perhaps out of fear of angering Beijing and being denied access to billions of Chinese consumers. Adidas, Nike, H&M, and other fashion brands faced boycotts in China last year after they expressed concerns over sourcing cotton from forced labor in Xinjiang, where the government has put millions of Uighurs into re-education camps. The companies are no longer expressing that concern. China is “just so big, both as a market and a manufacturing juggernaut, that companies feel they can’t afford to get in the crosshairs of the government,” said Michael Posner, a former State Department official.

What happens if athletes protest?

Nobody knows. IOC spokesman Mark Adams said athletes could express personal views during interviews and on social media, but did not address how the Chinese government might respond. “I think we have to wait for concrete examples,” Adams said. China’s Olympic organizing committee has warned that foreign athletes whose speech violates “Chinese laws and regulations” at the Games may face “punishment,” and has stated that the “politicization of sports” is opposed by the Olympic charter. The IOC relaxed its rules on athlete protests at the Tokyo Games, but it maintained restrictions on expression within Olympic venues and during competition. If athletes do protest, however, China’s 1.4 billion people will probably not know it. TV broadcasts would not show any anti-government messages, and the Cyberspace Administration of China has announced a month-long internet “purification” campaign to cleanse the internet of “illegal” content and create a “healthy, happy, and peaceful online environment.”

When Beijing hosted the Summer Olympics in 2008, those Games were seen as China’s grand entrance onto the world stage — and, perhaps, a chance for the country to democratize its institutions and join a rules-based international order. IOC officials shared lofty hopes the Games would improve human rights in China, and some Chinese officials hinted at a path toward greater domestic freedoms. There are no such hopes surrounding the 2022 Games. Under ruler-for-life Xi Jinping, who took power in 2012, China has made a sharp turn into unapologetic authoritarianism, with no dissent or forbidden ideas permitted. Despite its human rights abuses and Orwellian surveillance of its citizens, China has emerged as a global economic power. Confident and emboldened by his country’s economic and military might, Xi does not seem to care that the West disapproves of China’s policies. “If anything, there’s a lot less pressure than 2008,” said Amanda Shuman, a China researcher at the University of Freiburg. “The Chinese government knows full well that its global economic upper hand allows it to do whatever it wishes.”

byThe Week Staff February 6, 2022 February 6, 2022 Beijing’s Winter Olympics begin this week under the shadow of COVID and China’s flagrant abuses of human rights. Here’s everything you need to know: How is Beijing preparing? The 2022 Winter Games will take place in a “closed-loop system,” or bubble, to prevent the spread of…

byThe Week Staff February 6, 2022 February 6, 2022 Beijing’s Winter Olympics begin this week under the shadow of COVID and China’s flagrant abuses of human rights. Here’s everything you need to know: How is Beijing preparing? The 2022 Winter Games will take place in a “closed-loop system,” or bubble, to prevent the spread of…