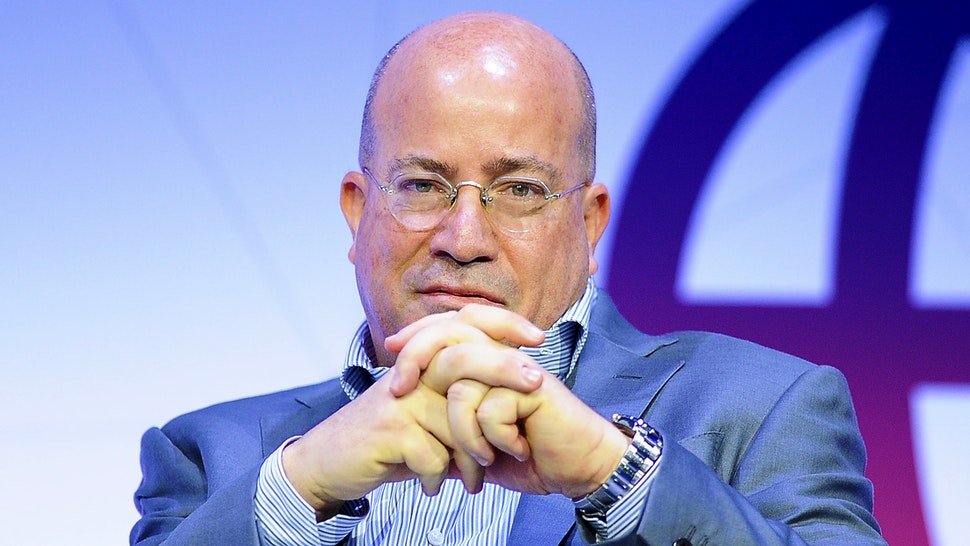 The Audacity to be Absurd and Asinine

Posted by Maggie on February 2, 2022 in From the editors

Embattled CNN boss Jeff Zucker walked away from the liberal network on Wednesday after failing to disclose a “consensual relationship” with a CNN staffer.

“As part of the investigation into Chris Cuomo’s tenure at CNN, I was asked about a consensual relationship with my closest colleague, someone I have worked with for more than 20 years. I acknowledged the relationship evolved in recent years. I was required to disclose it when it began but I didn’t. I was wrong. As a result, I am resigning today,” Zucker wrote in a memo to staffers shared by CNN’s Brian Stelter…

Zucker did not name his colleague in the memo, but the relationship is with Allison Gollust, the chief marketing officer for CNN. Gollust is remaining at CNN. https://t.co/leQjFGOtmi

Gollust was appointed as former New York Gov. Andrew Cuomo’s communications director in 2012 before bolting to join Zucker four months later at CNN. She became close to Zucker after a 15-year tenure at NBC before her work in the Cuomo administration and was once even floated as a candidate to eventually replace Zucker atop the liberal network…

Her job before that? Gov. Andrew Cuomo’s comms director.

This article suggests their relationship is why CNN protected the Cuomos for so long.https://t.co/I7T1Ryp4SM

The Cuomos taking down Zucker with them is the biggest twist since this week’s Boba Fett episode. https://t.co/To0IrlTVfr 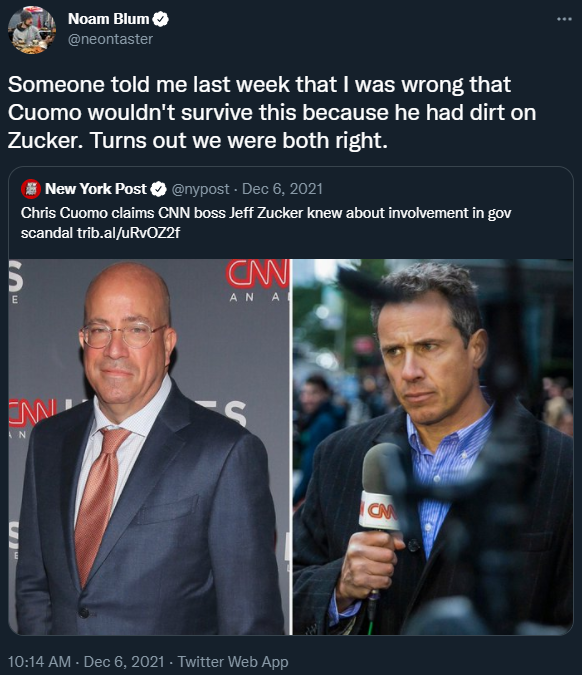 It’s been said Cuomo was allowed to get away with things as far as he did, was because he knew where the bodies were buried at CNN.

Zucker’s relationship with Gollust went on for years, and what he did to keep her near him (as he kept advancing her up the line) will be even more stunning to the CNN news room. https://t.co/STe578EX3W

Toobin is pulling for him

Who do you prefer to bang on company time (check all that apply):
1. a colleague
2. a child
3. myself

Something is fishy with this Zucker thing.

This really wasn’t a thing to resign over.

I guess we shall see. 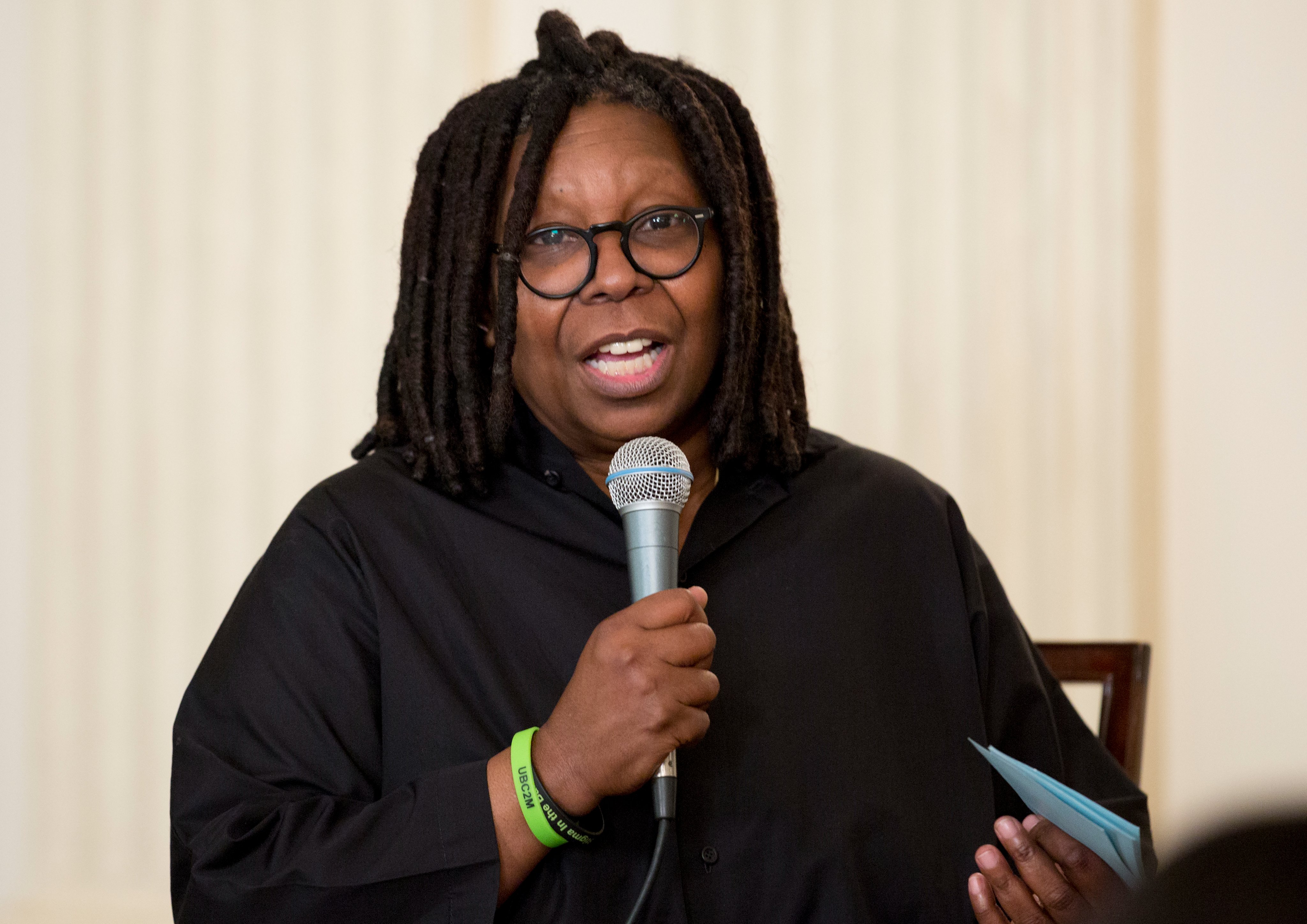 Tweets are fine @elonmusk but you can dramatically change the political and cultural landscape this way: 1. Buy and take over a major social media platform 2. Acquire or create a TV network like ABC, NBC or CBS 3. Create a world-class online university and offer degrees for free.

As a Federal Government Department, in Just Two Years the CDC has Taken Over the Disdain American’s Once Held for the USPS: 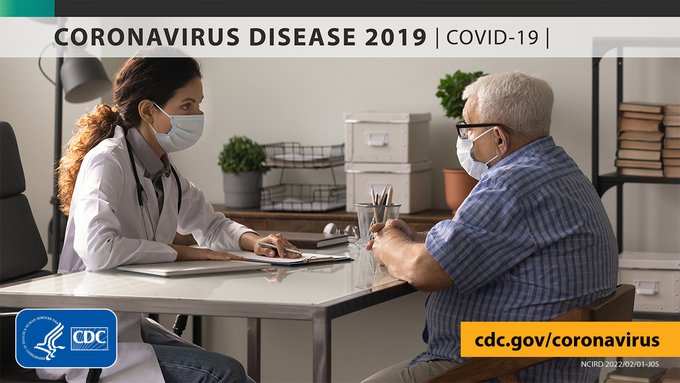 The anti-parasite drug ivermectin is not authorized or approved by FDA for treating or preventing #COVID19. Large doses can cause symptoms like nausea, vomiting, diarrhea, & seizures. Protect yourself from COVID-19 by staying up to date on your vaccines. https://t.co/RL1JxDdnJ8 pic.twitter.com/di4Dnwybw7

Twitchy: Sean Ono Lennon: Isn’t it weird how some people would be upset if ivermectin turned out to be an effective COVID treatment?

Worried abt dosage? You/medical board get off our private drs’ backs & allow them to prescribe the proper dosages/protocol w/their patients’ health history in-mind instead of ppl hunting for Ivermectin/dosing on their own. We seriously need a remake of Dallas Buyers Club w/this.

This morning, @GovRonDeSantis says he supports the legislature in Florida in cementing a physician’s right to use discretion in prescribing off label in consultation with their patients. He says they shouldn’t lose their license for using FDA-approved medication off label.

For clarification off-label prescription of approved drugs has been common by doctors for a long time. But with COVID-19 specifically, doctors are being threatened with, and in some cases, actually losing their license for doing so. Legislation would protect this practice.

IF ivermectin DID actually turn out to be an effective medication for Covid-19, you get the feeling that SOME people would actually be upset. How invested in your narrative do you have to be to NOT want medication to work? Seems a teensy-weensy bit weird doncha think?🧐

Joe Hoft: Archbishop Vigano letter to the US Catholic Bishops: “Time Will… Make the Masks Fall from Those Who… Disguised Themselves as Saviors of Humanity (While… They Sought to Subjugate… and Exterminate Citizens or Make Them Chronically Ill). … WOW!!! 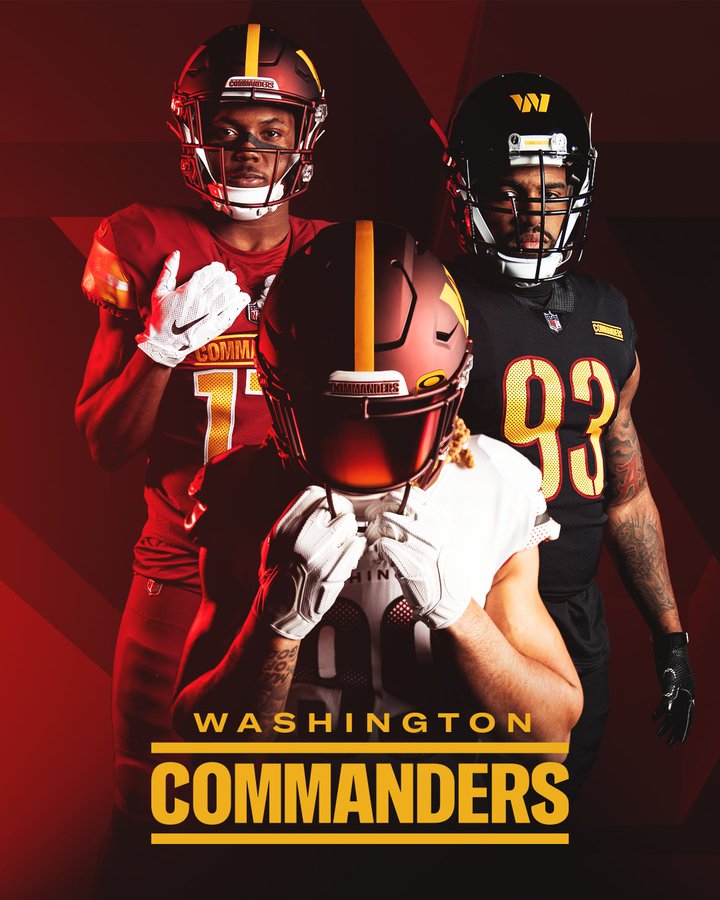 Twitchy: ‘This is what they came up with?’ After several years of intense deliberations, the Washington Football Team has chosen their new name

One legacy. One unified future.

Your #WOKE decision is the “Washington Commanders” … Sounds a bit white supremacy-ish. I mean, didn’t the slave ships have commanders on them? Try harder.https://t.co/ym1OyHChck

But wait. Hold the phone to the upper deck coaching box. It just might work, dammit…

So, they actually could’ve gone from “Redskins” to just “Reds”.

If the NFL is systemically racist against black coaches, how did 38 year old Brian Flores, who had never been a coordinator in the NFL or any other league, get one of 32 head jobs after being the linebackers coach for the Patriots for a few years?

Clay I think the lawsuit is to bring awareness that black coaches and there are alot of black coaches out there don’t get many interviews and if they do it is under the guise of the Rooney Rule which we all know is just a check the block thing.

The willingness of all media to presume the truth of everything Brian Flores alleges on his all day TV media tour is, frankly, an embarrassment to all media. 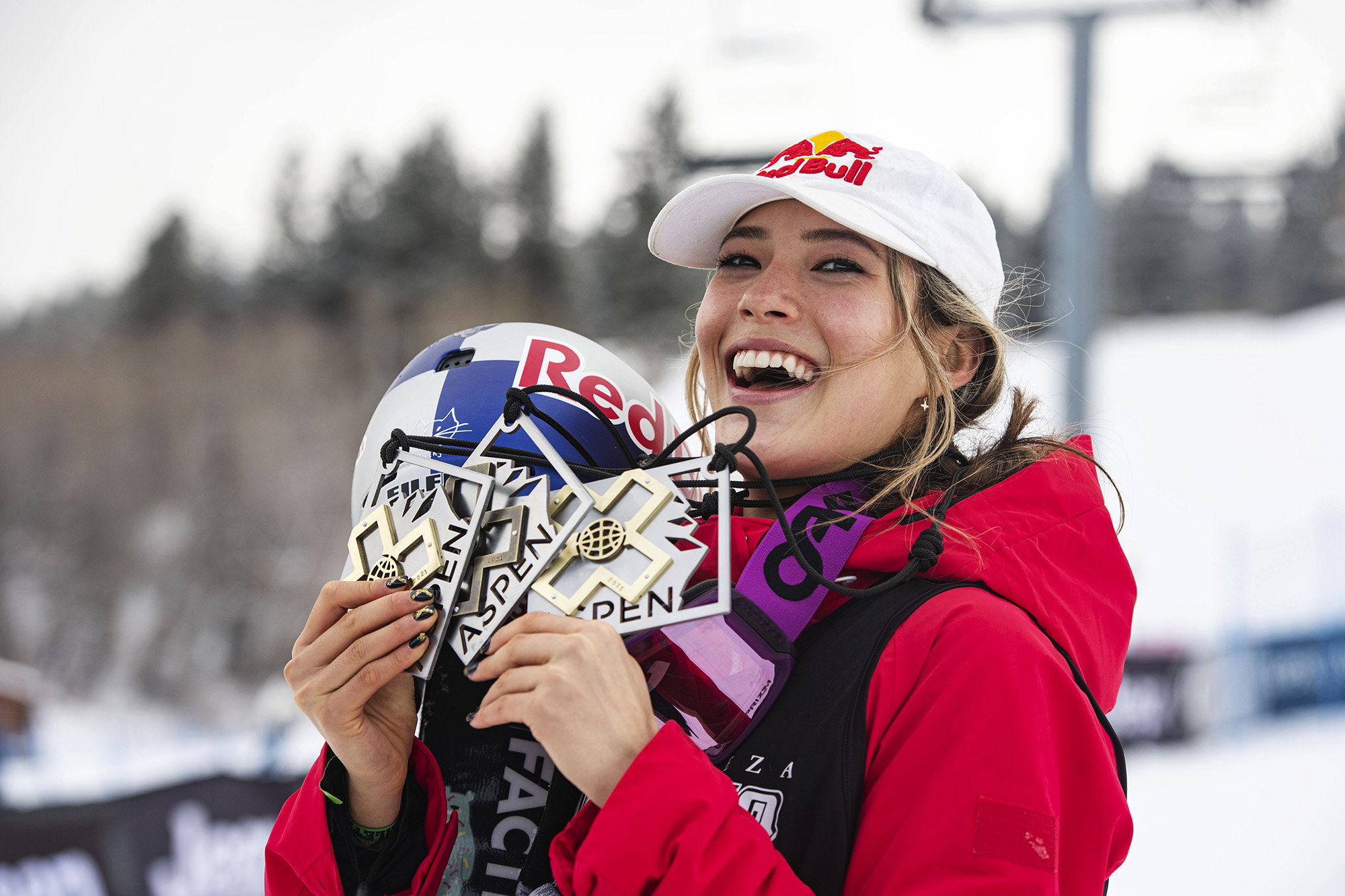 She could be America’s next Olympic darling — a stunning 18-year-old skier who signed with Victoria’s Secret and plans to attend Stanford after she vies for gold in Beijing.

But Eileen Gu won’t be competing for the US.

Instead, in a move that’s baffled members of the American skiing community, San Francisco-born and -bred Gu has joined Team China…

Others in the sport are questioning why Gu, an ultra-athletic freeskier and favorite to claim as many as three gold medals when the games begin Friday, would side with the host nation, which is accused of abusing human rights and engaging in unfair trade policies…

“It is not my place to judge, but Eileen is from California, not from China, and her decision [to ski for China] seems opportunistic,” said Jen Hudak, a former Winter X Games gold medalist for the USA women’s team.

“She became the athlete she is because she grew up in the United States, where she had access to premier training grounds and coaching that, as a female, she might not have had in China,” Hudak told The Post. “I think she would be a different skier if she grew up in China.

“This makes me sad,” added Hudak, who retired in 2014 after knee injuries derailed her career and has since co-founded Escapod Trailers. “It would be nice to see the medals going to America.”

Gu, a US citizen, made her decision with input from her Chinese mother, Yan, an outspoken “Tiger Mom,” and an American father who keeps a low profile, said one of her former coaches….

Where the U.S. #WOKE-based Curriculum Ranks with the Rest of the World:

The United States is now 13th in education but fear not, Biden has elevated or Neutral Gendering Education Program to number 1. 😳 pic.twitter.com/rasdQNEYcC

When the #WOKE Age of “Canceled” Crocodile Ends Up Biting Its Feeders:

J. Kim Murphy: Whoopi Goldberg Suspended From ‘The View’ for Holocaust Remarks … FTR, I don’t think Whoopi should be fired for her asinine take on race and her really gawd-awful history. This is nothing but a mid-winter two week paid vacation for the co-hen in ‘The View’ hen house. On that note, leave Joe Rogan (and I am not even a listener of fan of the guy). I am indeed, however, against the bullshit silencing, and deeming dangerous, of one side of today’s politics, issues, and arguments.

Outkick: CLAY TRAVIS: ‘THE VIEW MIGHT BE THE DUMBEST SHOW ON TELEVISION’ … As is their right to be, and nobody exercises that right quite like the clicking hens of ‘The View’. Every one of those leftist dingbats at that table has continually spewed lies and bullshit in the too long years of the show. Anybody remember Rosie O’Donnel and her “fire doesn’t melt steel” inane crap? And what Whoopi was trying to do, and not so much what she said, was to try to drag down another group’s history of persecution and oppression, and genocide, in order to push her ‘systemic racism’ bullshit, ‘Oh, it was not about ‘race’-race because they Nazis and Jews were both whites…’

Eve Barlow: Whoopi Goldberg’s Ignorance About The Holocaust Is What Happens When Intersectionality Rots People’s Brains: The Holocaust was not, as Goldberg put it, about ‘man’s inhumanity to man.’ It was about man’s genocide of Jews. … Note to Whoopi and her ilk: ALL violent crime, racism, genocide, infanticide, etc. is “man’s inhumanity to man” (which, by your #WOKE ideology standards is an old quote using unacceptable “patriarchal gender specific terms”.

MSNBC’s @morningmika Brzezinksi: “Everyone knows Whoopi Goldberg. She’s been on TV for decades … If you don’t know her heart, then you haven’t been watching … This cancel culture is getting so out of hand!” pic.twitter.com/lFaNt87xHP

The rumor is Whoopi is pissed-off for the ‘suspension’. But the facts remain that had a conservative talker said the exact same idiocy that she spewed, and then went on late night TV to spew worse that night, ‘The View’ harpies, with her in the lead, would be screaming for their firing.

J.J. Sefton’s classic spot-on take on this over @ AoSHQ:

That said, I’m all for self-cancelation-immolation…

I’m removing my podcast from @Spotify. I know it’s not a big deal but hope it will be part of a growing avalanche. Thank you to #NeilYoung, @jonimitchell, and @nilslofgren for your courage in leading the way.

Thank you, @MaryLTrump, for your stunning sacrifice and brave stance. Your tweet went viral because your liberal fans know that censoring their political adversaries – such as the Sanders-endorsing Joe Rogan – is of the greatest urgency. Censorship is the noble cause of our time: https://t.co/BQcDn7fKCJ

If a podcast falls in the woods, and no one had ever listened to it…

And this, my fellow American Spectators, is pretty much unconstitutional and the Biden administration’s cowardly and criminal attempt to coerce private companies to do their dirty work of censorship…

OH!!! And old Joe is getting his war: 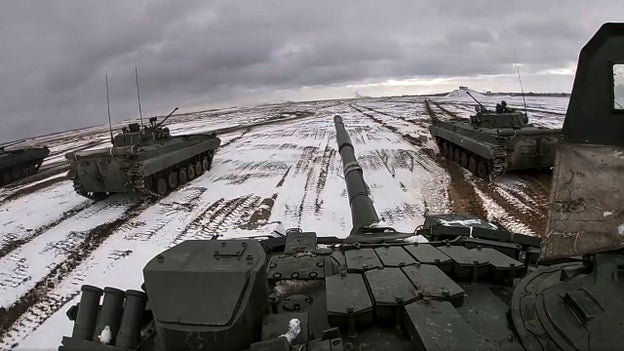 JUST IN – U.S. Army: Soldiers who refuse to get a COVID-19 vaccine will be immediately discharged, Reuters reports.

Reuters: U.S. Army: Soldiers who refuse to get a COVID-19 vaccine will be immediately discharged

Guess they won’t be going to Europe for the Russia-Ukraine war then. https://t.co/kvDvD9cY2Z

Matt Vespa: She Said What? Jen Psaki Could Be Bracing Us for an Abysmal Jobs Report … So, now if you’re out sick from work you are ‘unemployed’, according to the mega-brain-trust in the White House. And so, those 9M out sick were counted as ‘unemployed’?

Damn, how we miss you, Andrew, and would love to be hearing what you would have to say these past ten years of all this crap.

Posted by Maggie on February 2, 2022 in From the editors Who had this on their 2022 BINGO Card? BREAKING: MAJOR SHAKE-UP AT CNN: Breaking news from the Caligula News Networkhttps://t.co/2R1l0iotie — David Burge (@iowahawkblog) February 2, 2022 Brian Flood: Jeff Zucker out at CNN after failing to disclose ‘consensual relationship’ with colleague: ‘I was wrong’: ‘I was required to disclose it when…

Posted by Maggie on February 2, 2022 in From the editors Who had this on their 2022 BINGO Card? BREAKING: MAJOR SHAKE-UP AT CNN: Breaking news from the Caligula News Networkhttps://t.co/2R1l0iotie — David Burge (@iowahawkblog) February 2, 2022 Brian Flood: Jeff Zucker out at CNN after failing to disclose ‘consensual relationship’ with colleague: ‘I was wrong’: ‘I was required to disclose it when…