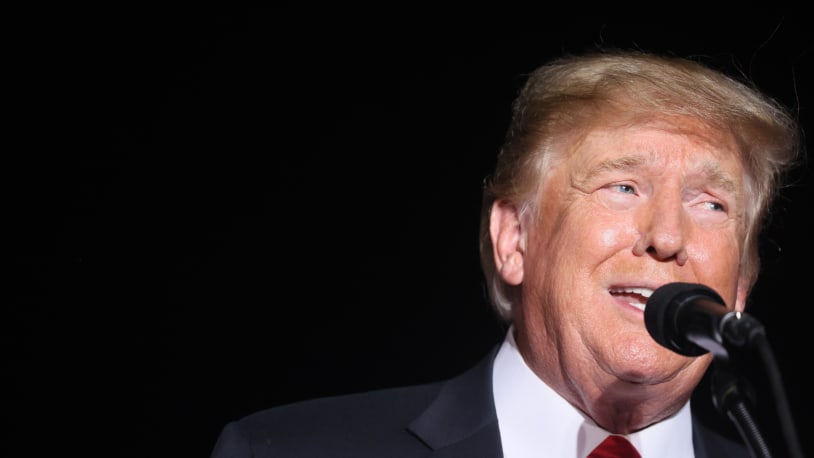 Trump takes on the fringe?

In the early days of his 2016 campaign, former President Donald Trump famously boasted of the hold he had over his followers. “I could stand in the middle of 5th Avenue and shoot somebody and I wouldn’t lose voters,” he told a rally in Iowa. For most of the years since, that has seemed true: Trump insulted veterans, equivocated about white supremacists, flubbed the nation’s COVID response, and eventually incited an insurgency at the U.S. Capitol. He still retained the devotion of most Republicans. It was remarkable and disturbing at once.

It turns out Trump was wrong, though. He can alienate some of his most ardent followers, but not by committing murder.

Instead, Trump’s undoing might come about because he has inverted the Fifth Avenue scenario: He has urged his supporters to protect their health by getting vaccinated against COVID-19. The former president is trying to save the lives of the people who love him — and that has confused and enraged them.

Let’s start at the beginning. I noted last week that Trump has belatedly come out in unequivocal favor of both the vaccines and booster shots. President Biden even spared a rare kind word for his predecessor: “It may be one of the few things he and I agree on,” Biden said in a White House speech. “People with booster shots are highly protected. Join them. Join us.” Trump was apparently heartened by this support, and he doubled down on his vaccine support — while opposing mandates — in an interview with right-wing pundit Candace Owens.

“Look, the results of the vaccine are very good, and if you do get it, it’s a very minor form,” Trump told Owens. “People aren’t dying when they take the vaccine.”

This is all true. But it generated tremendous pushback from Owens and other high-profile Trumpist conservatives in the days since.

Owens tried making excuses for the former president’s apostasy. “People oftentimes forget, like, how old Trump is,” she said in an Instagram video. “Like they came from a time before TV, before internet, before being able to conduct their independent research.”

Blogger Mike Cernovich accused Trump of toadying to the elites: “As usual he’s alienating his own supporters to impress people who don’t like him.”

And conspiracy-monger Alex Jones let loose with a howl of rage: Trump is either “completely ignorant” or “the most evil man who has ever lived to push this toxic poison on the public and to attack your constituents when they simply try to save their lives and the lives of others.”

Trump has made a political career out of stretching the Overton Window to its breaking point. It was the source of his appeal to MAGA Republicans and the reason most everybody else disliked him. It’s also why demagogic loudmouths like him usually burn out: Their shtick loses its novelty, and the crowd wanders off, either bored and ready for something less intense, or numbed to the usual outrages and needing ever-higher doses of vitriol to maintain their enthusiasm. With his new vaccine pitch, it’s possible Trump is finally becoming a victim of the second dynamic.

That would be a stunning development. Trump has held on to his support by never apologizing, never letting anybody else on the political stage appear more ferocious, more ready to fight, more alpha than him. Rep. Thomas Massie (R-Ky.) once articulated the phenomenon to the Washington Examiner. Right-wing voters who supported Massie and similar politicians like Sen. Rand Paul (R-Ky.) “weren’t voting for libertarian ideas — they were voting for the craziest son of a bitch in the race. And Donald Trump won best in class, as we had up until he came along.”

Encouraging people to get vaccinated while opposing mandates, though, is pretty normal. Trump joins Democratic governors like Laura Kelly of Kansas, Jared Polis of Colorado, and Gretchen Whitmer is rejecting Biden’s mandate. They’ve clearly calculated that their constituents are exhausted after two years of the pandemic, and that they’ll lose more support than they gain by fighting that particular battle.

It’s possible Trump has sincerely come to a similar conclusion, oddly enough. The former president is a genius at pandering to Republican conservatives; it’s unlikely he has suddenly lost his touch. And while it’s true that Republicans are much more likely than Democrats to be unvaccinated, it’s also the case that a lot of Republicans, especially more mainstream Republicans, have gotten their shots. One November poll — taken before the Omicron variant emerged later in the month — indicated that two thirds of GOP voters already had or probably would receive their booster shots.

The anti-vaxxers might be the loudest part of the Trump electorate, in other words, but most Republican voters are already doing what it takes to stay healthy. Maybe the GOP isn’t entirely a death cult. What this means, though, is that for all the anguish of extremist pundits, Trump is once again aligning himself with the base, especially the sort of suburban, centrist voters who recently propelled Republican Glenn Youngkin to a surprise gubernatorial win in Virginia.

What remains to be seen is whether that’s enough to prolong his political career — or if he needed the fringe all along.

In the early days of his 2016 campaign, former President Donald Trump famously boasted of the hold he had over his followers. “I could stand in the middle of 5th Avenue and shoot somebody and I wouldn’t lose voters,” he told a rally in Iowa. For most of the years since, that has seemed true: Trump…

In the early days of his 2016 campaign, former President Donald Trump famously boasted of the hold he had over his followers. “I could stand in the middle of 5th Avenue and shoot somebody and I wouldn’t lose voters,” he told a rally in Iowa. For most of the years since, that has seemed true: Trump…

Dad who told president ‘Let’s go, Brandon’ on says he was joking

The case for empowering Americans to vote with their feet