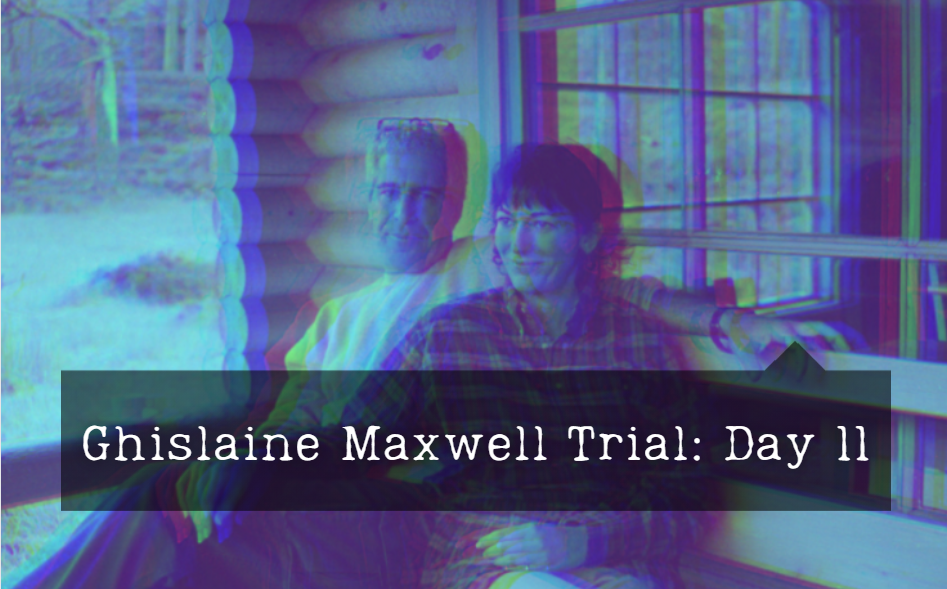 December 16, 2021 — Today began the eleventh day of trial in the case of the U.S. vs Ghislaine Maxwell. We have been providing daily coverage of the ongoing trial.  If you haven’t been following the trial, be sure to read our prior reporting to get caught up first.

Ghislaine Maxwell, daughter of infamous Israeli “superspy” Robert Maxwell has pleaded not guilty to eight charges, including child sex trafficking. Maxwell was partners with disgraced “financier” and “philanthropist” Jeffrey Epstein. Epstein was charged with child sex trafficking and arrested in 2019 but then died while in custody, conveniently shelving his expected trial. U.S. District Judge Alison Nathan has been presiding over the Maxwell case and has imposed strict secrecy, refusing to livestream the trial and redacting and sealing many exhibits. The judge also declined the public call-in line, despite this being a fairly standard practice.

After the government rested its case last week, the defense now has their turn and plans to call a variety of witnesses themselves.

Judge Nathan: What else?
Maxwell’s lawyer: The US’ rebuttal expert, I’m prepared to file something if they actually call the expert.
Judge Nathan: Hamilton?
Everdell: We reached him, he can do WebEx tomorrow.
Sternheim: Because of his condition, we haven’t spoken.

This is a strategy we knew the Maxwell defense would pursue, the “false memory syndrome” expert testimony. Depending on how the defense plays this, it could end up backfiring on them and looking disrespectful to the survivors.

Jury entering!
Maxwell’s lawyer: Dr. Loftus, are you aware of image enhancing memory distortion?
Loftus: It makes people feel better about themselves.
Maxwell’s lawyer: I asked you about C.V. So I move into evidence your C.V.
AUSA: Objection.

AUSA: In your book “Witness for the Defense,” you wrote that you should be an advocate
Loftus: That leaves out the context —
AUSA: You don’t sit in courtroom – you weren’t present for testimony on this case, right?
Loftus: I was not present in the courtroom.

AUSA: You’re charging the defendant $600 an hour right now, right?
Loftus: Yes.
AUSA: You were paid for high profile defendants, right? Millions of dollars? Loftus: I don’t know how much.
AUSA: In 1975 you didn’t charge $600 a hour, right?
Loftus: I did it free.

AUSA: You market yourself by testifying, right?
Loftus: I don’t market myself at all.
AUSA: You give lists of your cases to defense attorneys, right?
Loftus: When asked.
AUSA: You testified for Harvey Weinstein, right?
Judge Nathan: Just a moment.

[When they resume, there’s no more mention of Harvey Weinstein. At least not yet.]
AUSA: When you testify for high profile defendants, it brings you more business, right?
Loftus: Maybe.

AUSA: And the lost in the mall study – 25% misremembered, right?
Loftus: Correct.
AUSA: I’m not going to ask you to describe a rectal enema, but it’s a painful procedure, right?
Loftus: Yes.
AUSA: This memory could not easily be implanted

Re-direct.
Maxwell’s lawyer: There are restrictions on what kind of studies you can do, right? AUSA: Objection.
Judge Nathan: I’ll allow it.
Loftus: We can’t implant memories of sexual abuse.

Maxwell’s lawyer: So now we need the sidebar.
Judge Nathan: We’ll get the jurors their afternoon break.
[Jury leaves, no mention of snacks]
Judge Nathan: Mr. Azaran, could you step out?
AUSA: These are 15 years of records, including outside the charges time frame.

Now the exhibit is going sealed. Everdell continues Q&A
Aznaran: At JFK, each of the five international terminals has a code and it’s in this report. I ran it Dec 14
Everdell: What does airline not APIS mean?
Aznaran: APIS is Advanced Passenger Information System.

Maxwell’s lawyer Everdell: So for Annie Farmer, you have records from 1997 to 2006?
Aznaran: Yes.
Everdell: And this one, for Jane – you see her date of birth, right? Can I say the year?
[doxing alert]

Cross examination.
AUSA: What are the differences between CBP record before and after 9/11? Aznaran: The further back you go, you won’t get an on-board or not on-board status.
AUSA: So the ones before 9/11 were not as complete?
Aznaran: Not all the time.

Judge Nathan (at 4:52 pm) Defense may call its next witness. It’s Dominique Hyppolite.
Maxwell’s lawyer: Where do you live and work?
Hyppolite: Palm Beach school district. I coordinate the processing of subpoenas and represent the district as records custodian.

Maxwell’s lawyer: May I approach the witness with a document?
Judge Nathan: It’s 5 pm. Let’s end for the day.
AUSA: We could just stipulate to this.
Defense: remaining witnesses Eva, Michele & Kelly. Depending on your rulings.

Judge Nathan: Letters due at 7:30 pm (Inner City Press will report – IF they get docketed)
Defense: We might end tomorrow, or on Monday.
Judge Nathan: Closings on Monday, then. Charge and to the jury.
[So, before Christmas? Countdown.]

Judge Nathan: This is usually the point I allocate the defendant [that is, ask if they’ll testify]
Defense: Let’s do that tomorrow.
Judge Nathan: So we’ll do the closings and charge on Monday [meaning, deliberation on Tuesday Dec 21 Xmas..

Judge Nathan: So we’re done. You’ll get the draft charge tomorrow.
[With defense agreeing closings Monday, seems clear Maxwell will NOT testify] Judge Nathan: Letters due at 7:30 pm
(Inner City Press will report – IF they get docketed) Watch this feed.

That wraps up today’s proceedings in the sham Maxwell trial.

The intelligence angle is essential to understanding Maxwell and her activities alongside Epstein, particularly the sexual blackmail motive, which was the end goal of their procuring and abusing of minors. Intelligence agencies have used sex blackmail since at least the 40s.

Whitney is absolutely correct here, which is why we made it a point to outline this background in our prior reporting on the trial.

Tartaglione was Epstein’s cellmate in MCC when JE was mysteriously attacked, an incident that got JE put on suicide watch. Oddities about the story abound, incl. fact that Tartaglione had a contraband phone & conflicting stories re: whether Tartaglione was JE’s attacker or savior

This should be considered a conflict of interest, but for some reason no one has mentioned it, not even the prosecution in the case.

As Julie K. Brown writes, surveillance video of the attack on Epstein disappeared, the contents of Tartaglione’s cell phone have never been released, and Tartaglione claims (laughably IMO) that he was being set up for protesting conditions at MCC. https://t.co/HyUbO4thye pic.twitter.com/SJEY7wMVPc

How convenient, like the mass of videos and audio we know Epstein had from all his properties, the evidence just “disappears” mysteriously.

Sternheim was appointed for the very specific purpose of representing Tartaglione in a Curcio hearing, a secret (even from the prosecution) proceeding that dragged on for 20 months to determine whether there are conflicts within Tartaglione’s legal team.

It’s not clear what Weider was even doing on the case—he was never listed on PACER and seems to be primarily a bankruptcy attorney. Also, he appears to be dead. https://t.co/5mqmotPZg9

But even as Curcio counsel, Sternheim is still on the case, and maintains access to all filings and evidence—she’s in the loop even as she represents Epstein’s co-conspirator Ghislaine Maxwell. And there are interesting things happening in the Tartaglione case right now.

This is an obvious conflict of interest, and the Courts are to avoid “even the appearance” of a conflict, so this decision is bizarre.

Here we should note another overlap between the Ghislaine Maxwell case and Tartaglione’s: They share a prosecutor, AUSA Maurene Comey, daughter of former FBI director James Comey. pic.twitter.com/0CnpnXySmH

That doesn’t seem to be an accident. This is what “containment” looks like.

So…does the overlap between Maxwell’s and Tartaglione’s cases mean “the fix is in”? I don’t really think so tbh. Legal practice always tends to be smaller than people imagine. Even fed crim practice in SDNY is not that big a pool, I expect.

Perhaps, this is just how the game is played though? 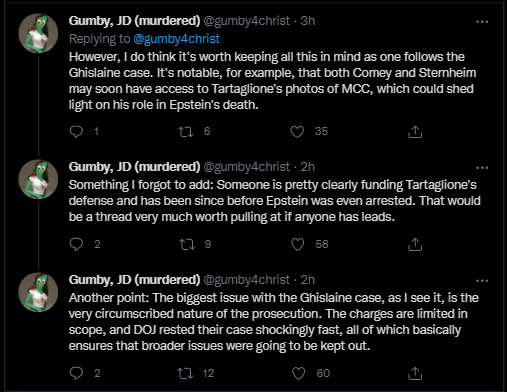 I believe Gumby is absolutely correct here, and I am interested in finding out who is funding Tartaglione’s defense. This is something to dig into more deeply, and perhaps I will eventually have some answers for you.

This trial is still ongoing, and our coverage will be daily. Please check back for more updates.

December 16, 2021 — Today began the eleventh day of trial in the case of the U.S. vs Ghislaine Maxwell. We have been providing daily coverage of the ongoing trial.  If you haven’t been following the trial, be sure to read our prior reporting to get caught up first. Ghislaine Maxwell, daughter of infamous Israeli…

December 16, 2021 — Today began the eleventh day of trial in the case of the U.S. vs Ghislaine Maxwell. We have been providing daily coverage of the ongoing trial.  If you haven’t been following the trial, be sure to read our prior reporting to get caught up first. Ghislaine Maxwell, daughter of infamous Israeli…

Progressives are ready to edit the Constitution. Are conservatives ready to answer?