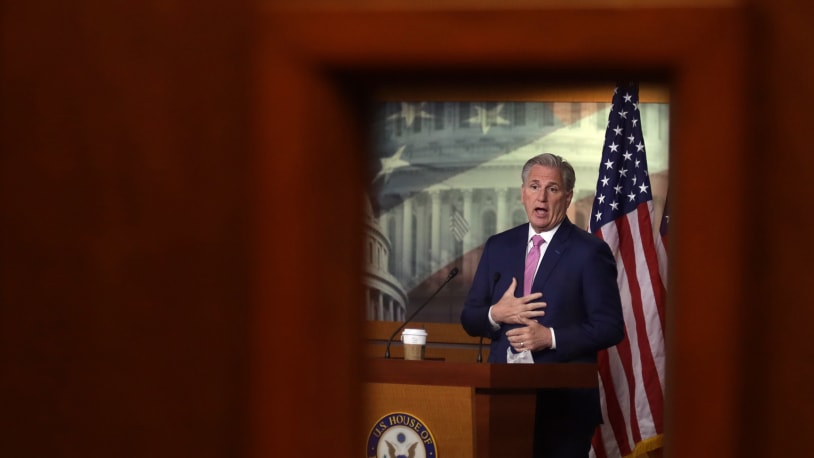 It’s been just weeks since Rep. Kevin McCarthy (R-Calif.) embarked on his historically torturous path to becoming speaker of the House of Representatives, tasked with maintaining some semblance of order and authority for his Republican caucus. Having cleared that initial hurdle, however, does not mean McCarthy’s path forward will be an easy one — as speaker, he has made himself beholden to members of his own party eager to pull him further rightward, lest they find someone more amenable to their MAGA agenda. At the same time, the GOP’s barely-there House majority itself is in a perpetual state of precariousness, with almost no margin for dissent in the face of a Democratic caucus that has thus far displayed a spartan level of discipline amongst itself.

With all eyes on the looming battle over the impending debt ceiling breach, there is, in fact, another battlefront for which McCarthy is being forced to prepare: his previous vows to remove key Democrats from their congressional committees, even as he restores once deposed members of his own party to their various assignments. It’s a line in the sand that may have played well in his bid to become speaker, but now that he has the gavel in his grasp, Democrats have already moved to call his bluff — and he has answered in kind — in what seems poised to become a crucial stress test of his leadership. Here’s everything you need to know:

How did we get here?

In one of his first acts as speaker, McCarthy made good on his promise to reinstate the committee assignments of Reps. Marjorie Taylor Greene (R-Ga.) and Paul Gosar (R-Ariz.), both of whom had been removed by the then-Democratic-led House for promulgating various conspiracy theories and overtly violent rhetoric across social media. That promise, made while McCarthy campaigned for the speaker’s gavel, was buttressed with a similar assurance to his fellow Republicans: that Democratic Reps. Eric Swalwell (D-Calif.), Adam Schiff (D-N.Y.), and Ilhan Omar (D-Minn.) would be removed from their respective committees, citing the “new standard” established under former Speaker Nancy Pelosi (D-Calif.) in unseating Gosar and Greene.

On Wednesday McCarthy successfully blocked Swalwell and Schiff from their seats on the Intelligence Committee, citing Swalwell’s past associations with an alleged Chinese intelligence agent and Schiff’s leadership of the House probe into alleged Russian collusion with former President Donald Trump. McCarthy’s focus on Omar stems from her past criticisms of Israel, which he deemed “antisemitic” in a November Fox News interview, and which he has since used as his justification for removing her from the House Foreign Affairs committee.

In effect, House Democrats this week dared McCarthy to make good on his threats against Swalwell, Schiff, and Omar, submitting the two Intelligence Committee member’s names to be seated per usual in a letter from Minority Leader Hakeen Jeffries (D-N.Y.) to the speaker’s office.

“Together, these Members have over two decades of distinguished leadership providing oversight of our nation’s Intelligence Community, in addition to their prosecutorial work in law enforcement prior to serving in Congress,” Jeffries wrote, noting that the removal of both Greene and Gosar “does not serve as precedent or justification for the removal of Representatives Schiff and Swalwell, given that they have never exhibited violent thoughts or behavior.”

On Tuesday evening McCarthy responded, sharing a letter he had sent to Jeffries that rejected Swalwell and Schiff, writing that he “cannot simply recognize years of service as the sole criteria for membership on this essential committee.”

I have rejected the appointments of Adam Schiff and Eric Swalwell for the House Intelligence Committee.I am committed to returning the @HouseIntel Committee to one of genuine honesty and credibility that regains the trust of the American people. pic.twitter.com/ePxlbanxta

“Integrity matters more,” he added in bold, citing the “misuse” of the committee during the previous two congressional sessions as having left the United States “less safe” — a condition upon which he did not elaborate.

Crucially, because the Intelligence Committee is a “Permanent Select” (as opposed to Standing) committee, McCarthy does indeed posess the authority to unilaterally nix submissions — a power he does not have when it comes to Omar’s position on the Standing Foreign Affairs committee. To remove Omar, he would need to hold a full floor vote, as Democrats did when they removed Greene and Gosar in 2021. And that, it turns out, could be where his leadership meets its first major challenge.

But Republicans have the majority, so what’s the problem?

As we saw with McCarthy’s tortured path to obtain the speaker’s gavel, the barely-there GOP majority in the House is at perpetual risk of falling apart, with just a handful of members able to derail any of the speaker’s priorities by siding with Democrats, or simply not voting at all. In fact, McCarthy himself contributed to his own weakened position by granting an extraordinary suite of concessions to the furthest-right wing of his party to secure their support for his speaker’s bid in the first place. What this means in practice is that McCarthy’s bid to oust Omar from her committee seat could be scuttled by a minimal number of moderate Republicans uncomfortable with removing the Minnesota lawmaker from her position should a full vote be called.

Are there any Republicans who have said they’ll back Omar?

Not exactly, although it’s a distinction without a practical difference. Though no GOP lawmaker has yet said they support Omar directly, a growing number of members of McCarthy’s own party have gone on the record saying they don’t support his effort to oust political rivals from their committee seats.

“Two wrongs do not make a right. Speaker Pelosi took unprecedented actions last Congress to remove Reps. Greene and Gosar from their committees without proper due process. Speaker McCarthy is taking unprecedented actions this Congress to deny some committee assignments to the Minority without proper due process again,” Indiana Republican Rep. Victoria Spartz said in a press release Tuesday. “As I spoke against it on the House floor two years ago, I will not support this charade again. Speaker McCarthy needs to stop ‘bread and circuses’ in Congress and start governing for a change.”

Speaking with CNN’s Manu Raju, Rep. Nancy Mace (R-S.C.) also suggested she wouldn’t vote to remove Omar, citing her opposition to Greene and Gosar’s removals, and adding that “I’m going to treat everybody equally, I want to be consistent on it.”

Rep. Andy Barr (R-Ky.) shared a similar sentiment to Axios, saying, “I don’t think tit for tat is necessary here,” while Rep. David Valadao (R-Calif.) told the same publication that “I’ve never been a fan of [committee removals.] Members are elected by their districts. … To throw them off just seems inappropriate.”

What are Omar, Schiff, and Swalwell saying?

In a tripartite appearance on MSNBC’s The Last Word earlier this week, all three Democrats targeted for removal by McCarthy struck a conspicuously defiant tone in the face of their then–potential ousting.

“This is Kevin McCarthy’s promise to the Marjorie Taylor Greenes in order to earn their vote,” Schiff said. “He will bring payback because she was properly removed from her committee.”

“There were both Democrats and Republicans that took a vote in favor of removing those two members for inciting violence,” Omar added, pointing out that both Greene and Gosar were removed from their seats by a bipartisan majority. “I don’t think that that will be the case in removing someone like me, who has had the opportunity to serve on the Foreign Affairs Committee for the last two terms, who is now set to be ranking on the Africa Subcommittee as the first and only African-born member of Congress.”

Swalwell, meanwhile, suggested that his removal from the Intelligence Committee could ultimately come back to haunt McCarthy, promising to use his newly cleared schedule to make life much more difficult for the already embattled speaker. “He’s going to regret the day that he has given me more free time … because I’m not going to be quiet. I’m not going to back down. I’m with Mr. Schiff and Ms. Omar in the breach. I’m going to do everything I can over the next two years to hold Mr. McCarthy and the people struck this corrupt bargain with accountable whether it’s inside the House, or outside putting us back in the majority in the midterms of 2024.”

January 25, 2023 January 25, 2023 It’s been just weeks since Rep. Kevin McCarthy (R-Calif.) embarked on his historically torturous path to becoming speaker of the House of Representatives, tasked with maintaining some semblance of order and authority for his Republican caucus. Having cleared that initial hurdle, however, does not mean McCarthy’s path forward will…

January 25, 2023 January 25, 2023 It’s been just weeks since Rep. Kevin McCarthy (R-Calif.) embarked on his historically torturous path to becoming speaker of the House of Representatives, tasked with maintaining some semblance of order and authority for his Republican caucus. Having cleared that initial hurdle, however, does not mean McCarthy’s path forward will…