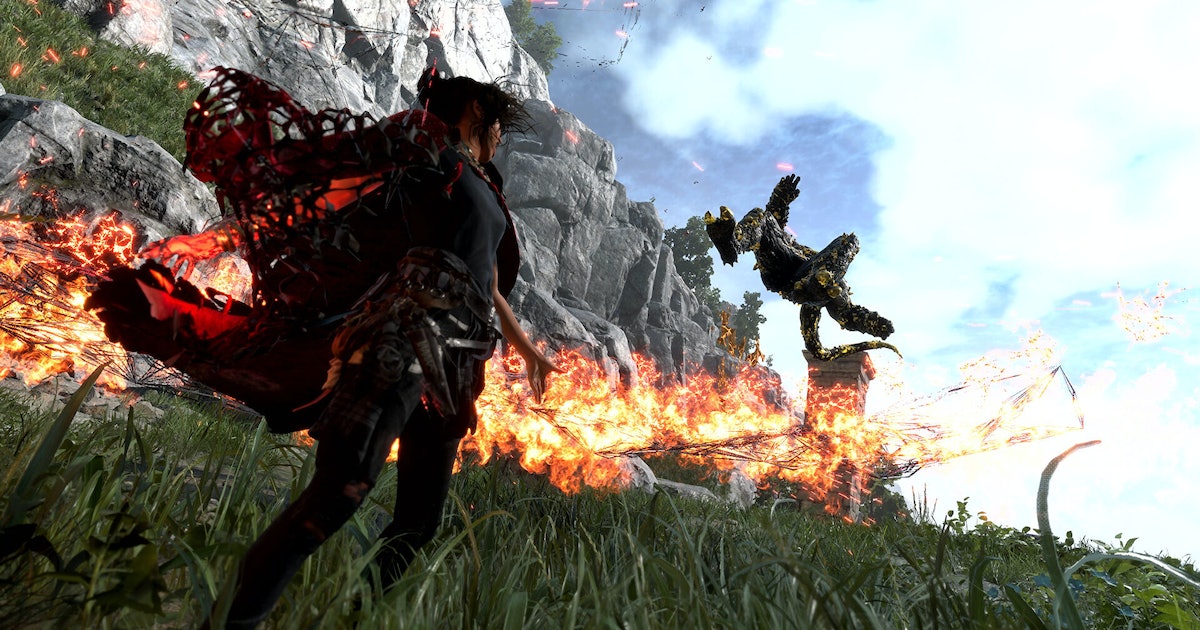 ‘Forspoken’s fantastic gameplay gets buried under a weak story

After unlocking a fourth set of elemental magic, I’m brimming with enough confidence to take down anything Forspoken might throw at me — except a 90-minute exposition dump right before the final boss battle.

Forspoken is vibrant, experimental, and undercooked all at once. It feels like a throwback to the Xbox 360-era of Square Enix games that were weird and experimental, like The Last Remnant and Infinite Undiscovery, only with a much bigger budget and flashier visuals. Its traversal and combat mechanics shine, but they’re trapped underneath a story and setting that feels painfully average and completely unwilling to engage with more challenging themes.

Forspoken casts you as a young Black woman named Frey Holland who was abandoned by her parents as a baby on the streets of New York. After a lifetime spent in the foster system, Frey now lives alone in an abandoned apartment with her adorable cat, Homer. In the opening hour of the game, she goes to court for grand larceny, is held up at gunpoint, and then gets transported to another world — before getting captured and sent to court again. Video games like the Persona series have been making clever excuses for how teens wind up alone in the big city for decades, but this isn’t one of them.

It’s a tone-deaf setup from a writing team that includes industry luminaries like Amy Hennig and Gary Whitta, especially considering critics and audiences have voiced concerns about the portrayal of Frey ever since a developer described the character as having a “hip-hoppy walk” in a now-infamous 2021 interview. Worse, Forspoken never engages with Frey’s backstory in a meaningful way, dropping her into a mostly generic fantasy yarn rather than exploring how her life in New York shaped her worldview.

Things improve somewhat once we leave New York. A talking bracelet transports Frey to Athia and attaches itself to her arm, and she quickly learns the world has been wracked by a magical cataclysm known as The Break. Forespoken wastes no time introducing villains called the Tantas, formerly benevolent rulers who became homicidal tyrants. Most of the story involves figuring out what happened to Athia and its Tanta, and how Frey fits into the grand scheme of things.

We’re told throughout Athia has a rich history, but the narrative generally fails to do anything surprising or complex with it. It’s all too easy to see most of Forspoken’s twists coming from a mile away. For some baffling reason, the game reiterates major plot points multiple times until they’re beaten into the ground. On the plus side, some stellar performances — especially Ella Balinska as Frey — keep things engaging from moment to moment.

While Forspoken’s story disappoints, its gameplay systems are engaging and rewarding, with progression that encourages thorough exploration. Combat and traversal are both built around magic. Frey starts with one set of “Purple” earth magic, and as you progress, you’ll receive three wildly different sets that represent fire (Red), water (Blue), and electricity (Green). Each set has its own skill tree with nearly a dozen spells. These are broken up into three primary spells and a handful of support spells. For example, Frey’s basic Purple Magic attack shoots a quick rock projectile, but holding the button has three different effects depending on which primary spell you choose: a single explosive shot, a rapid-fire stream, or a shield.

There are nearly 100 spells in Forspoken, and because each is on its own cooldown, you’ll constantly need to adapt your strategy, which encourages experimentation and keeps the action thrilling and fresh. Combat is only heightened by Forspoken’s gorgeous graphics, with dazzling particle effects that make each and every battle feel like a spectacle.

Forspoken’s other main feature is Magic Parkour. By holding down the circle button, Frey will seamlessly jump and dash over any obstacle. It’s a quick way to get around that’s also vital for dodging enemy attacks in combat, a bit like Noctis’ warp evade in Final Fantasy XV. As you unlock additional magic, you’ll also access new parkour abilities, like gliding over water, leaping up cliffsides, and a grappling move.

Everything about the Magic Parkour flows impeccably well, and it’s so satisfying to dash across the landscape of Athia. At times, I preferred to take the scenic route instead of using fast travel. It’s an unlikely point of common ground between Forspoken and 2022’s Sonic Frontiers — the exploration and traversal can put you in a kind of flow state for hours on end.

Progression for Frey is tied directly to Forspoken’s open-world activities, and it’s only by exploring that you’ll increase your stats and power up your spells. Each of Athia’s four “kingdoms” is littered with icons, points of interest, and activities. Abandoned cities and towers lay strewn across the landscape, many containing clues of tragic stories about The Break. But two-sentence archive entries aren’t a great way to fall in love with a world. It reminds me a lot of Final Fantasy XIII, which required hours of reading codex entries to understand its story.

Most of the open-world activities are built around combat or traversal, but completing them will reward you with valuable stat boosts, equipment, and new spells. The gameplay loop has a tangible sense of reward, and no matter what you’re doing, it feels like you’re meaningfully enhancing Frey’s combat abilities.

It’s abundantly clear that Forspoken’s story and setting are MacGyvered together by a committee of writers, but running around Athia is so much fun that it’s easy to overlook a lot of its shortcomings. The ambitious combat system and traversal are truly memorable and satisfying, I’m hopeful that a potential sequel or successor could elevate these ideas into something even more special.

Forspoken launches on January 24 for PS5 and PC. Inverse reviewed the PS5 version.

I feel like an unstoppable god. After unlocking a fourth set of elemental magic, I’m brimming with enough confidence to take down anything Forspoken might throw at me — except a 90-minute exposition dump right before the final boss battle. Forspoken is vibrant, experimental, and undercooked all at once. It feels like a throwback to…

I feel like an unstoppable god. After unlocking a fourth set of elemental magic, I’m brimming with enough confidence to take down anything Forspoken might throw at me — except a 90-minute exposition dump right before the final boss battle. Forspoken is vibrant, experimental, and undercooked all at once. It feels like a throwback to…

Every correct response from April to February