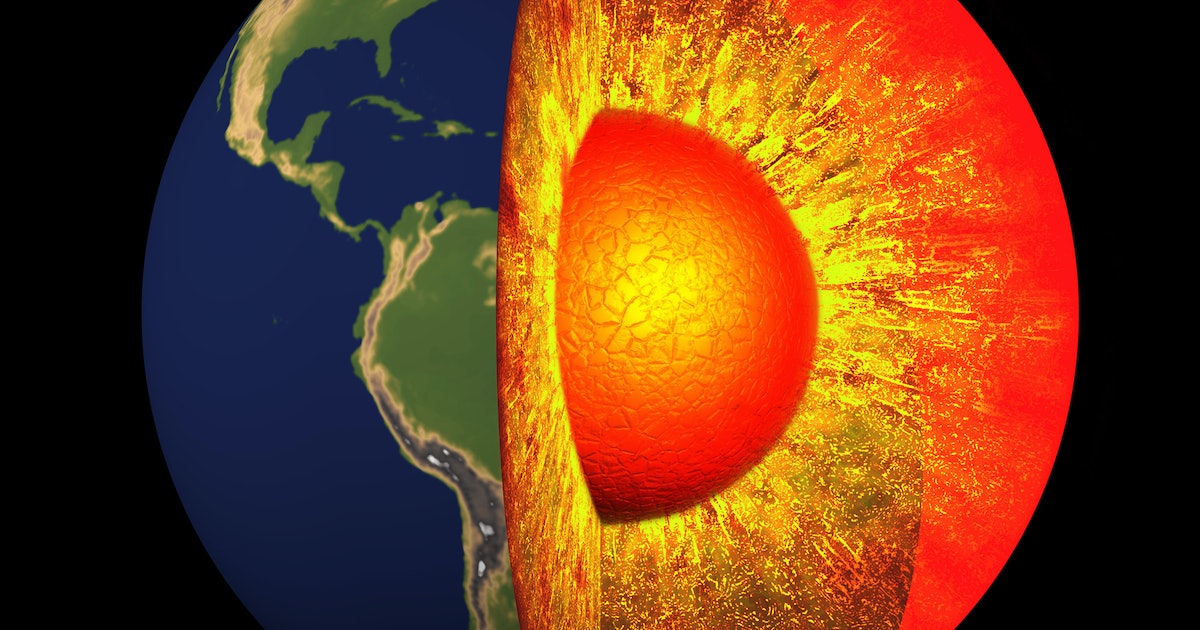 Mysteries still abound for scientists studying the Earth’s climate, biosphere, surface topography, and even the oceans, but they all have a distinct advantage: the subjects of their inquiries are, to some degree or another, directly accessible for observations.

Not so for geologists studying the very heart of our planet. Lying 3,900 miles beneath Earth’s crust, mantle and liquid metal outer core, the solid iron inner core of our world is accessible only by listening to seismic waves that pass through it during Earthquakes, or, in the recent past, nuclear explosions. In decades of such seismic research, geologists have come to believe that the inner core oscillates, spinning this way and then that, over some period of time.

And a new study published Monday in Nature Geoscience suggests that the inner core may have just stopped moving.

Such a pause portends no disaster, but it is a surprising finding and one that if accurate may even increase the mystery of just what lies in the darkest deep beneath feet.

“To me, the interesting thing is we see all the complexity here at the surface of the earth,” University of Southern California seismologist Jon Vidale, who was not involved in the study, tells Inverse. “The things that are changing down there seem to be stronger changes than we see at the surface. So there might be some interesting things we haven’t understood yet about that inner core boundary.

What’s New? — Yi Yang and Xiaodon Song, researchers at Peking University, in China, looked at seismic data from the 1990s and 2000s resulting from pairs of Earthquakes. They found that the timing of these waves changed a lot for many years, indicating that the inner core was moving, presenting a different face to the waves, thus affecting the timing of how the waves moved. But since 2009, there has been very little change in the timing of seismic waves, suggesting the rotation of the inner core may have paused.

Looking further back to seismic readings from the 1960s and 70s, they argue that the inner core may oscillate over a 70-year period, changing directions about every 30 years. The inner core was spinning in one direction, paused, and reversed sometime in the early 1970s, they argue in the paper, and it’s now pausing and about to spin in the other direction.

What do the findings mean? — The important geoscience context to understand, according to Vidale, is that the inner core is decoupled from the rest of the Earth, and is not involved in the production of the planet’s magnetic field. It’s the liquid metal outer core, spinning constantly, that produces the magnetic field, while the motion, or lack of motion, of the inner core, has remained more mysterious.

What scientists do know is that both the inner core and the Earth’s mantle, the vast region of hot rock between the outer core and the planet’s crust are heterogenous — there are areas of greater and lesser mass, in other words, which generate gravitational forces between the two parts of our planet.

“We’re talking about masses in the mantle and the inner core attracting,” Vidale says. If you try to turn the inner core out of position where those masses attract, “it would have a restoring force, just like a pendulum. So you turn it out, and then it comes back. So if you just tweak it and let it go, it oscillates.”

In June, Vidale and Wei Wang, a researcher at the Chinese Academy of Sciences, published a paper using similar data to Song and Yang’s work, arguing that the inner core rotation changes on a six-year cycle, switching directly every three years. This would fit with data from many other independent researchers showing that the length of Earth’s days also fluctuates on a roughly six-year cycle. In Vidale and Wang’s paper, they found the day shortened by 0.01 milliseconds when the inner core was spinning Westward with respect to the Earth’s crust and mantle, and that the day lengthen by up to 0.12 milliseconds when the inner core was Eastward, in the same direction Earth’s rotation as a whole.

It’s not clear to Vidale, based on the available data, whether he or Song and Yang are correct.

Song agreed that the two views were incompatible, but noted his work utilized data from a longer range of time, looking at seismic readings from 1964 to 2021.

But there’s only so much data to be had about the inaccessible inner core, Vidale adds. It can and has been interpreted in different ways.

“These are just completely orthogonal theories and every theory has some data that contradicts it,” Vidale says. “That’s why I think there’s more going on than just one of these ideas alone.”

Song, for his part, believes his and Yang’s paper, “did not rule of the theory of deformation of the inner core boundary by Prof. Buffet,” Song says, but did rule out “out changes of the [inner core boundary] topography as the sole or major source of the observed time-varying inner core waves.”

What’s next? — To arrive at some super theory, some explanation that can merge different interpretations of inner core seismology or eliminate some theories, Vidale says, more data is needed.

“We didn’t actually suspect this till recently, the clocks on the seismometers seem to be not nearly as accurate as we thought,” Vidale says. Although seismographs were slaved to GPS satellites and should be accurate to a fraction of a microsecond, “We can see variations on the order of hundredths of a second, in the timing, that seems to be errors.”

These errors seem to be an issue with seismograph software, now the GPS satellite network he adds, and rebooted and updated seismographs show fewer errors. That means new data coming in over time could chase out the bad.

“As we look back at the mistakes, they’re naturally disappearing over time, as we upgrade things,” he says. “I’m an optimist. So I think we’re gonna look at this data and realize what’s going on, I’d say in the next 10 years.”

Mysteries still abound for scientists studying the Earth’s climate, biosphere, surface topography, and even the oceans, but they all have a distinct advantage: the subjects of their inquiries are, to some degree or another, directly accessible for observations. Not so for geologists studying the very heart of our planet. Lying 3,900 miles beneath Earth’s crust,…

Mysteries still abound for scientists studying the Earth’s climate, biosphere, surface topography, and even the oceans, but they all have a distinct advantage: the subjects of their inquiries are, to some degree or another, directly accessible for observations. Not so for geologists studying the very heart of our planet. Lying 3,900 miles beneath Earth’s crust,…