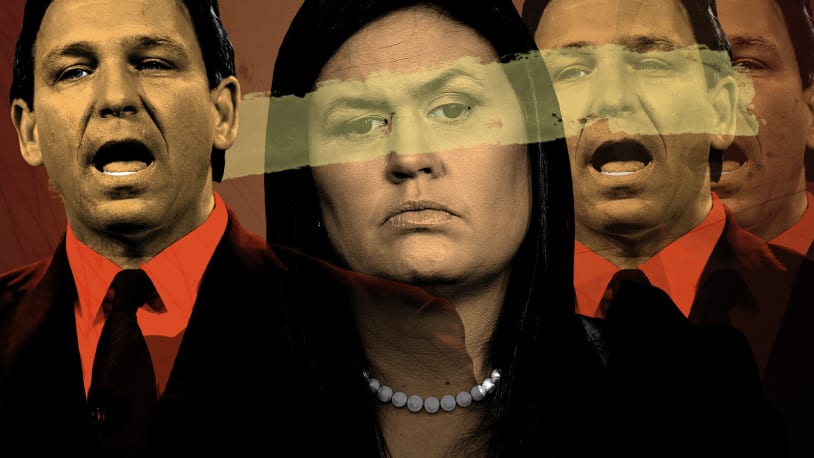 As a child raised in the pressure cooker of a high-profile political family, it seems, in retrospect at least, inevitable that Sarah Huckabee Sanders would eventually follow in her father’s footsteps and enter the political limelight herself — first as the most visible staffer in the Trump administration outside of the president himself, and now as the newly elected governor of Arkansas, occupying the same position her father Mike Huckabee held nearly 15 years prior.

In her inauguration address on Jan. 10, Sanders acknowledged the historical significance of her recent gubernatorial win, saying “this day is especially notable because I happen to be the youngest governor currently serving anywhere in the country… as well as the first daughter of a governor to take the oath of office … and the first woman to serve as governor of Arkansas.” Yet, for as much as her governorship is very much a milestone for her state, Sanders’ first few days in office have been noticeably reminiscent of another Republican administration: that of Florida’s Ron DeSantis, who has used his three years in Tallahassee to both position his state at the forefront of the conservative culture wars, as well as himself to become the potential 2024 GOP presidential nominee.

While it’s still early in her term, the similarities between what Sanders has accomplished already, and DeSantis’ Florida agenda are undeniable. Here’s everything you need to know:

Nowhere has Ron DeSantis’ application of state power to influence the lives and livelihoods of broad swaths of Florida residents been more aggressively on display than with his repeated targeting of educational institutions, in what he described in 2021 as an effort to “fight back against woke indoctrination” during the unveiling of his appropriately named “Stop WOKE” act.

While the bill itself, which allowed students and teachers alike to sue their respective schools for exposure to potentially uncomfortable material such as the 1619 Project on American racial history, is currently blocked by judicial order, the same conceptual underpinnings are on full display in Arkansas, in one of the executive orders signed by Gov. Sanders on her first day in office. Officially an “Executive Order to prohibit indoctrination and critical race theory in schools,” Sanders’ newly instituted policy is less expansive than DeSantis’ full legislative action, but retains the core ideological thrust of the measure: to mandate what is and isn’t acceptable to be taught in the state’s education system based on culture war catchphrases, rather than serious pedagogical research.

As New York Magazine‘s Jonathan Chait pointed out earlier this month: “[DeSantis’] determination to control the ideological tenor of schools — has been on bright display. [Far-right Hungarian autocratic leader Viktor] Orban identified schools and universities as a source of dissent, and set out to seize ideological control by placing his allies in control. DeSantis is doing the exact same thing.” And while Sanders’ executive effort lacks the broad — if legally dubious — legislative imprimatur of its Floridian cousin, it is undeniably a product of the same conservative gene pool. In both cases, the measures’ significances are as much symbolic as they are applicable; the invocation of “critical race theory” and “woke indoctrination” serve as shibboleths to a conservative base hungry for culture wars and warriors, no matter the actual complex policies involved.

What’s Sanders saying about it?

For her part, Sanders hasn’t been circumspect about following in DeSantis’ policy footsteps. In announcing her nomination of former Florida Department of Education Senior Chancellor Jacob Oliva to lead Arkansas’ Education Department, Sanders explicitly cited his work to implement DeSantis’ various school-focused initiatives, calling him “a leader who has proven himself in the fight to empower parents and implement bold education reforms.”

I am proud to announce that Jacob Oliva will be my nominee for Secretary of @ArkansasEd. He is a leader who has proven himself in the fight to empower parents and implement bold education reforms under Governor @RonDeSantisFL and we are ready to transform Arkansas education. pic.twitter.com/NA4bjsuLJA

It was Oliva who reportedly spearheaded elements of DeSantis’ work to dictate individual school districts’ policies regarding Florida’s so-called “Don’t Say Gay” regulations, which critics contend is one of the nation’s most restrictive, anti-LGBTQ laws in the country. Politico’s Andrew Atterbury assessed Sanders’ decision as “bring[ing] in a Florida leader who in recent years played a key role in carrying out the education agenda of GOP Gov. Ron DeSantis.”

Nestled among the flurry of first-day executive orders signed by Sanders was a seemingly inconspicuous mandate to “Respect the Latino Community by eliminating culturally insensitive words from official use in government” — a policy requiring all state agencies and offices to “revise all existing written materials by replacing the terms ‘Latinx,’ ‘latinx,’ ‘Latinxs,’ or ‘latinxs’ with ‘Hispanic,’ ‘Hispanics,’ ‘Latino,’ ‘Latinos,’ ‘Latina,’ or ‘Latinas.'”

Why the day-one focus on the use of the debated term “Latinx” in a state with comparatively few Latino residents? Sanders’ order comes amidst a broader GOP push to court a demographic bloc long forecast to move rightward; in the 2022 midterms, it was DeSantis who most notably capitalized on that effort, winning the majority of his state’s Latino voters, even as predictions of a broader push rightward failed to materialize nationwide.

While “Latinx” has remained a relatively unused term within the Latino community, it has been a favorite of late by Democrats hoping to make inroads with a new generation of voters who may be more conscience of gender-neutral terminology. That, in turn, has made it a favorite punching back among Republicans, who have seized upon the word as an example of liberal overreach at the expense of the community’s interests themselves. And in Florida, where more than a quarter of the state is Hispanic or Latino, the phrase has been the subject of sharp rebukes from local Latino Republican figures, including now-Rep. Anna Paulina Luna (R-Fla.) who demanded Democrats “stop trying to make LatinX happen” before she decisively flipped a congressional district that had been solidly blue since 2016.

Keep calling them “Latinxs,” I’m sure that will help your outreach efforts. Florida Democrats should also adopt this term immediately in all communications. https://t.co/LLmV2vb49n

So what’s all this about then?

Broadly, Sanders’ steps to emulate DeSantis’ administration — if not in terms of hard policy, at least in terms of optics — are as much a statement of solidarity with the GOP base as they are actual plans for governance. Raising the specter of “critical race theory” and derisively rejecting the term “Latinx” on her first day is essentially Sanders’ way of signaling to GOP voters that she is a responsive vehicle to their culture war demands, no matter whether any concrete legislation follows. As UCLA Latino Policy and Politics Institute Director Sonja Diaz explained in the Sacramento Bee‘s La Abeja newsletter: “There are so many things to be thinking about right now, with the climate crisis, with infrastructure opportunity, with what it means to have a female governor of Arkansas, and instead she’s using her first day in office to essentially continue forward with a culture war.”

Ron DeSantis has shown that this type of political posturing can elevate governors to national conservative figures and potential presidential candidates. With that in mind, Sanders, long a political insider and now a politician herself, is proving to be a quick study, and one whose significance within the Republican Party seems, for now, guaranteed.

January 20, 2023 January 20, 2023 As a child raised in the pressure cooker of a high-profile political family, it seems, in retrospect at least, inevitable that Sarah Huckabee Sanders would eventually follow in her father’s footsteps and enter the political limelight herself — first as the most visible staffer in the Trump administration outside of the…

January 20, 2023 January 20, 2023 As a child raised in the pressure cooker of a high-profile political family, it seems, in retrospect at least, inevitable that Sarah Huckabee Sanders would eventually follow in her father’s footsteps and enter the political limelight herself — first as the most visible staffer in the Trump administration outside of the…

Why union membership hit a historic low even as numbers climbed

Debt ceiling deadline: How worried should Americans be?