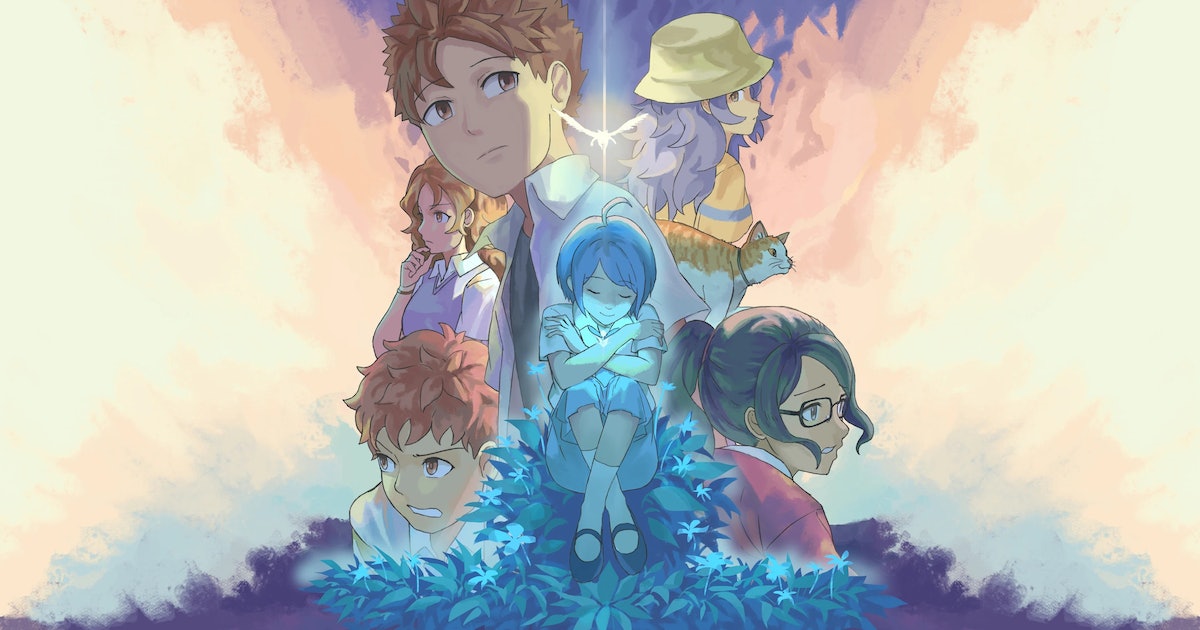 Drowning in a river trying to save a little girl is a hell of a way to open a game about high school romance.

But this literal nightmare is exactly what happens to Atma, the main character in A Space for the Unbound. He wakes up next to his girlfriend, Raya, and thus begins the story of their dreamy, bizarre romance. Set in Indonesia in the late ‘90s, A Space for the Unbound follows Atma and Raya as they near graduation and reflect on what the future holds for them. Atma and Raya draft a bucket list of activities to do together and skip class. Little did they know that the end of their high-school days also means the end of the world.

What ensues is a heartwrenching story of love and loss, with a supernatural twist.

You see, Raya has the power to warp reality and materialize all sorts of objects. One of the items on Atma and Raya’s to-do list is seeing a movie together, but he doesn’t have enough money to purchase two tickets. However, Raya uses her power to make it so that the theater is running a buy-one-get-one-free special that day.

These minor and seemingly innocuous occasions come off as adorable initially, but as the game progresses, Raya starts changing bigger events when they don’t go her way. Very early on, a crack in the bright blue sky appears. With each subsequent chapter, the crack gets bigger and bigger, foreshadowing something disastrous if things keep escalating. Will reality itself break?

Atma also has a mysterious red book that allows him to “Space Dive” into the psyche of other people. It’s a similar concept to Persona 5’s Palace dungeons. Here, he can investigate a person’s inner secrets and wishes — and even manipulate them. While both characters have good intentions with these powers, at least initially, their actions have major consequences later on.

The supporting cast outside of Atma and Raya gets a surprising amount of character development. Each receives a dedicated chapter that explores how they fit into Raya’s life. This results in Atma discovering a different side to her that makes him reevaluate their relationship. It’s a gripping and memorable way to tell their story, and keeps you eager to see what’s next.

A Space for the Unbound beautifully depicts its small Indonesian town with remarkable attention to detail. Unlike the chibi-style characters you’d find in older Pokémon games, the character models here have real human proportions. The sprites aren’t static either, as characters walk around constantly and bop their heads up and down even when standing still. Despite the 2D perspective, we still get a startling sense of realism.

That said, the stunning scenery grows a bit tiresome without any kind of fast-travel between important locations. And because we’re in 2D, figuring out which road or alley to take in order to advance the plot can oftentimes get confusing. A Metroidvania-style map, like in Metroid Dread, would have gone a long way here.

The minute-to-minute gameplay involves Atma solving puzzles with his magic book and diving into other people’s heads. In one instance, Atma wants to get a cake to cheer Raya up, but the local baker is having doubts about their career path. Atma uses items found in the real world to sabotage an imaginary cooking competition so the baker wants to continue making pastries instead of switching to savory Chinese food. These puzzles strike a satisfying balance of intuition and interest while offering just the right amount of challenge.

Take in the View

Despite its few flaws, A Space for the Unbound still delivers a compelling story with pitch-perfect pacing. The early chapters focus on Atma exploring the town and getting to know people. In a few cases, Atma can even Space Dive into them to activate small side quests, like helping a musician get over their creative block. While completing these doesn’t really offer gameplay benefits to progress the story, it provides enough worldbuilding to make you really care about the town as a thriving community.

The game’s beautiful soundtrack is mostly filled with serenading pianos and other soft instruments whenever Atma strolls around the town, adding to its calm atmosphere. The songs can also get more intense, especially when he confronts the local biker gang. There’s always a sense of urgency to advance the story because of Raya’s increasingly mysterious motivations, but these side stories are a welcome distraction to learning more about the townspeople along the way.

A Space for the Unbound is a brisk 15-hour story that is full of surprises and potent emotional beats. While it doesn’t offer much in the way of replayability, it’s a hugely memorable experience nonetheless.

Drowning in a river trying to save a little girl is a hell of a way to open a game about high school romance. But this literal nightmare is exactly what happens to Atma, the main character in A Space for the Unbound. He wakes up next to his girlfriend, Raya, and thus begins the…

Drowning in a river trying to save a little girl is a hell of a way to open a game about high school romance. But this literal nightmare is exactly what happens to Atma, the main character in A Space for the Unbound. He wakes up next to his girlfriend, Raya, and thus begins the…