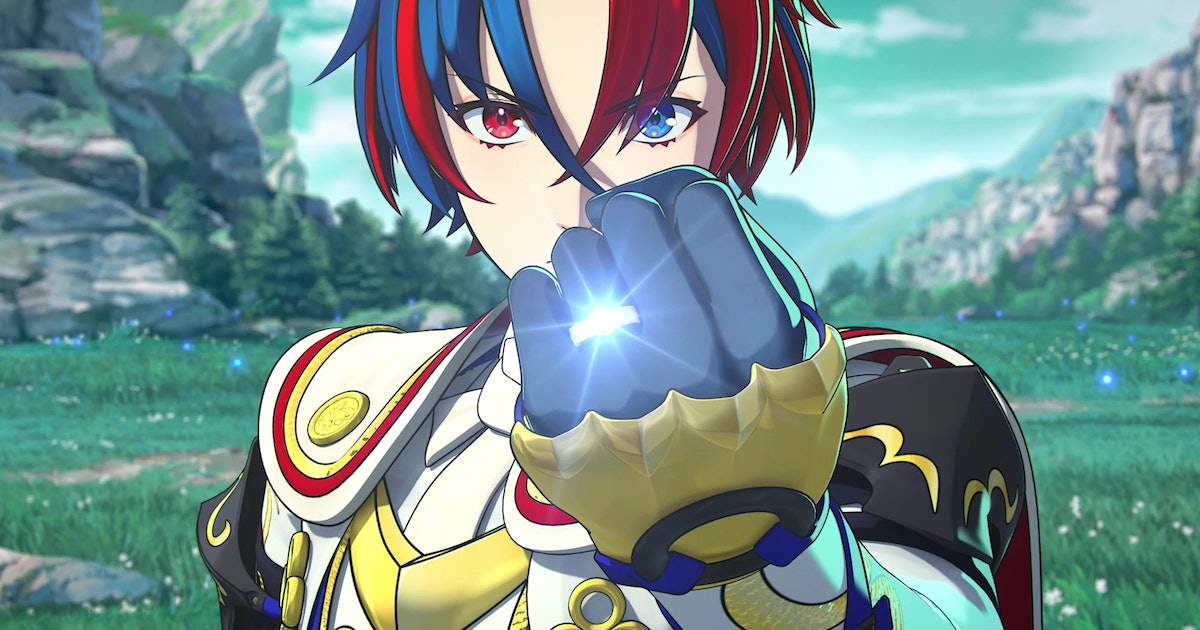 My army has suffered a crushing defeat.

We’ll live to fight again, but winning the bigger conflict now seems out of reach. As my allies line up to assure me we’ll see it through if we can only stick together, I’m left with two lingering questions.

Who are all of you again? And haven’t we done all this already?

Fire Emblem’s tradition of focusing on character relationships hit a peak in Three Houses, and we all kind of assumed that would continue into Engage. Sadly, that’s not the case. Fire Emblem Engage scales its social interactions down to a bare minimum, leaving a cast of underdeveloped characters in its wake. At the same time, it features some of Fire Emblem’s best tactical combat, making the game feel as sharply divided as its protagonist’s over-discussed red-and-blue hair.

Fire Emblem Engage wastes no time getting started, throwing you into battle in its first few moments. The series’ weapon triangle, which gives certain weapon types advantages against others, returns with a twist. If you attack an enemy you have the advantage against, they lose the ability to counterattack for that turn, making it a near-necessity in some boss battles. The downside is that enemies can do the same to you. It can trivialize some fights, but it incentivizes playing strategically.

The same can be said for the Engage system. Any unit in your army can become best buds with an Emblem (a hero from a previous game in the series) if you equip them with an Emblem Ring. Doing so grants them a few helpful abilities, plus the power to Engage, channeling the friendly ghost for three turns and enabling one use of an extremely powerful attack. Choosing the right moment to Engage can practically win a battle on its own, as most of these attacks can take out any enemy in a single hit.

You can optimize your Emblems by matching them with units that benefit most from their stat boosts. But the way more fun option is creating offbeat combinations. One of my favorite tricks involves the armored knight Jade and the mage Emblem Celica. Celica’s ability lets you teleport a huge distance and unleash a devastating magic attack. Jade is hopeless with magic, so the attack and stat boosts are wasted, but with this combo, I can send a heavily armored unit behind enemy lines and watch enemy attacks bounce pathetically off her armor as she thins the ranks with counterattacks.

Is this the most effective synergy? No. Is it satisfying? Absolutely.

As a strategy game, Fire Emblem Engage is great. Off the battlefield, its problems start to overwhelm. The Jades and Celicas fighting with you aren’t chess pieces. They’re meant to be characters with wants, needs, and crushes on each other. Most characters in Engage introduce themselves with a single unique quirk and never get more interesting. Etie likes to work out, so every conversation you have is about gains. Anna is a carefree kid who talks incessantly about money. So cute! I can’t wait to hear about it 60 more times. Emblems are even more poorly defined, each getting only a handful of vague dialogue lines throughout the entire game.

Like Three Houses, Engage gives you a home base called Somniel, but Garreg Mach it is not. You can upgrade weapons and do push-ups for stat boosts, all of which quickly start feeling like chores. Eating meals with your allies may improve relationships, but there’s hardly a single interesting conversation to be had with any of them. Somniel feels as cold as the stone it’s carved from, and the characters who live there do nothing to change that.

So your allies end up feeling like chess pieces after all, albeit ones with bright costumes, brighter hair, and quirky affectations. Engage’s story feels the same: full of initial promise that doesn’t go anywhere. This isn’t the branching epic of Three Houses; It’s the stuff of Saturday morning cartoons. You play as the Divine Dragon, defender of all that is Good, determined to challenge the Fell Dragon, whose name sums up his whole deal.

Fire Emblem Engage repeats strikingly similar story beats so often the sense of déjà vu becomes impossible to shake. There’s a tremendous amount of child neglect and abandonment in the story, but it’s no more interested in exploring that than in emphasizing one character’s obsession with unusual food. Character after character lays bare their trauma and loneliness in thuddingly plain terms, but when Engage gets to the messy business of healing and growth (you know, the things that make a story interesting), it’s almost entirely through rapid personality shifts in rushed, unearned scenes.

Engage is about building connections and about how your bonds with other people make you stronger. At least, those are things it keeps saying, though it doesn’t have anything to say about them. Moment to moment, the story is about sprinting across the world, collecting Emblem Rings without lingering long enough for anything too interesting to happen.

At one fairly early point, Engage makes its boldest move: Once you’ve gotten used to battling with Emblems, a story twist shuffles them around, changing which are available for you to use. Because weapon proficiency is tied to Emblems, it can completely wreck your character builds and sap a lot of the fun from its combat. As annoying as it is to have the rug pulled out from under you, it’s also the only point where Engage’s story syncs up with its gameplay. I can’t help but respect the decision to throw such a central conceit out the window, at least for a while.

There’s no denying how much fun it is to wade into battle with your Emblems. The Engage mechanic adds a welcome twist to battles, but a dull story and the drudgery of the Somniel drown it in hours of filler. Despite the fun I had in combat, I can’t seem to remember much of anything that happened in Fire Emblem Engage. I don’t think that’s a good sign.

My army has suffered a crushing defeat. We’ll live to fight again, but winning the bigger conflict now seems out of reach. As my allies line up to assure me we’ll see it through if we can only stick together, I’m left with two lingering questions. Who are all of you again? And haven’t we…

My army has suffered a crushing defeat. We’ll live to fight again, but winning the bigger conflict now seems out of reach. As my allies line up to assure me we’ll see it through if we can only stick together, I’m left with two lingering questions. Who are all of you again? And haven’t we…

Why can’t I understand my dog? Recent research may offer an answer