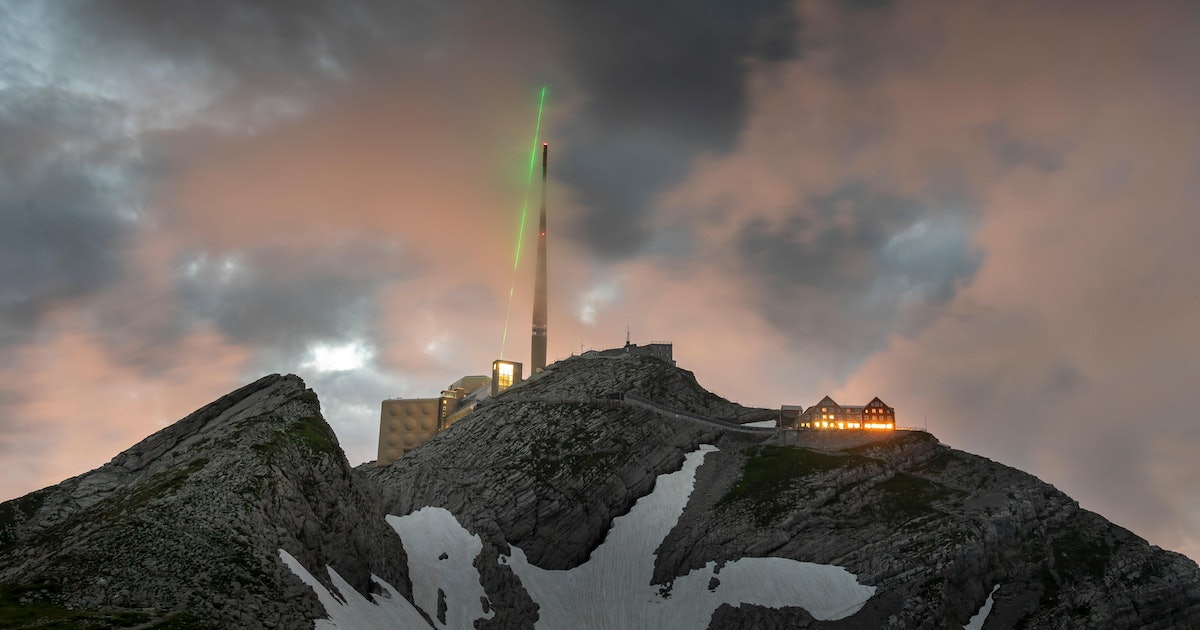 In a wild first, physicists used lasers to control lightning on a mountaintop

Last year marked the 270th anniversary of Benjamin Franklin’s lightning rod — but it’s more than a relic of history. The Franklin rod remains in use today because the simple design exploits some powerful physics: A tall metal rod lures in lightning and chunky wires dissipate the storm’s energy into the earth, sparing humans and surrounding structures.

But thanks to recent physics breakthroughs, a wild new technology could end the rod’s lightning safety monopoly.

“The idea is to protect a much bigger space than the classical lightning rod,” Aurélien Houard, a physicist with France’s École Polytechnique, tells Inverse. Typically, this tool juts out several meters above a tall building, limiting the area it can cover. “What we want to do is to improve the protection range to hundreds of meters, or kilometers.”

What’s new — Houard’s team recently attempted to divert lightning by supplementing the classic metal rod with a virtual one — namely, a beam from a laser the size of a large car, as reported in a new study published in Nature Photonics.

During their 2021 experiment atop a Swiss mountain, a powerful beam of laser light created a huge “filament” in the sky that guided lightning strikes. This marks the first successful attempt to control real-life lightning with lasers.

Here’s the background — “This concept of trying to control lightning, guide lightning, or trigger lightning with lasers, it’s not very new,” Houard says. Physicists first started looking into the unusual idea in the 1960s and 1970s. Labs that study lightning have previously used laser pulses to guide artificial lightning on a small scale — but with electrical discharges so tiny that they could fit in the palm of your hand.

Researchers have also attempted to wield lasers out in the field, but each failed to actually redirect strikes. Japanese scientists did manage to coax a wee 2-meter-long spark of lightning plasma (ionized gas) in 1999.

“Each time the technology of the laser was different,” Houard says. “But it’s not really managed to either have lightning at a good position or to observe a real guiding.”

This 3D reconstruction shows how the laser successfully guided four discharges of electricity.

What they did — The basic premise: Intense laser bursts can create long filaments of plasma, or ionized gas. This heats air molecules and leaves behind channels of low-density, conductive air — a path for lightning to discharge its pent-up energy, if timed right.

Preceding laser tech from this line of work could beam about 10 laser pulses per second. But since lightning sparks on the order of milliseconds, Houard’s team know that they’d need much higher frequencies to catch lightning in sync.

A few years back, they learned of a German company developing lasers capable of blasting 1,000 pulses per second. The groups teamed up to develop a laser specifically for lightning.

Then, in 2021, the team began assembling the giant system on Säntis Mountain in Switzerland. They even had to send parts up on a gondola and deliver some components via helicopter.

Around a dozen researchers spent several nights on the mountain waiting for lightning. About a week after they aimed the laser toward the top of the mountain’s lightning rod, the concept worked.

“It was a clear night,” Houard recalls. “And we had a very clear image where we saw it was guided exactly where we were generating the filament.” Two cameras installed nearby captured the lightning and recorded the laser guiding four discharges. One strike even followed the filament’s path for about 50 meters.

Why it matters — Classic lightning rods are immobile and can only work with tall buildings — so they can’t protect open spaces. And the rods aren’t foolproof: Lightning can still knock out airport towers and spark fires. Ditto for power stations.

Above all, laser rods could solve a major scientific mystery: Much of the physics of lightning remains elusive. “There is no easy way to understand the lightning phenomena, or to predict it,” Houard says, as with many meteorological events. Now, experts hope this type of tool could illuminate these puzzling dynamics.

What’s next — You won’t be installing lasers on your roof anytime soon. Houard says the filament needs to actually trigger the lightning to offer maximum protection. While it’s clear that the device can guide lightning, sparking it is a different story. That will hopefully be sorted out in future tests, he explains.

For now, the findings may help our grasp of the physics behind both lasers and lightning.

Many mysteries remain in the physics of how lightning emerges, Neil Donahue, an atmospheric physical chemist from Carnegie Mellon who wasn’t involved in the new study, tells Inverse. “We for sure can’t predict when and where a lightning strike will occur,” he says. “So something like this could be a useful tool in a scientific toolkit to explore this stuff.”

According to Houard, the team has plans to inch their tech closer to real-life applications. They intend to crank up the laser intensity and tune it to form longer filaments and test in other settings, like flatter land

So, will airports actually deploy these expensive high-power lasers?, Donahue doesn’t quite buy it yet: “Cool device — probably lunacy, in terms of actual application.”

In fact, Donahue firmly believes that classic lightning rods have many more years of honest work ahead. “Lightning rods are passive. They just sit there, they point, and they work.”

Last year marked the 270th anniversary of Benjamin Franklin’s lightning rod — but it’s more than a relic of history. The Franklin rod remains in use today because the simple design exploits some powerful physics: A tall metal rod lures in lightning and chunky wires dissipate the storm’s energy into the earth, sparing humans and…

Last year marked the 270th anniversary of Benjamin Franklin’s lightning rod — but it’s more than a relic of history. The Franklin rod remains in use today because the simple design exploits some powerful physics: A tall metal rod lures in lightning and chunky wires dissipate the storm’s energy into the earth, sparing humans and…

One daily social practice could help stave off dementia