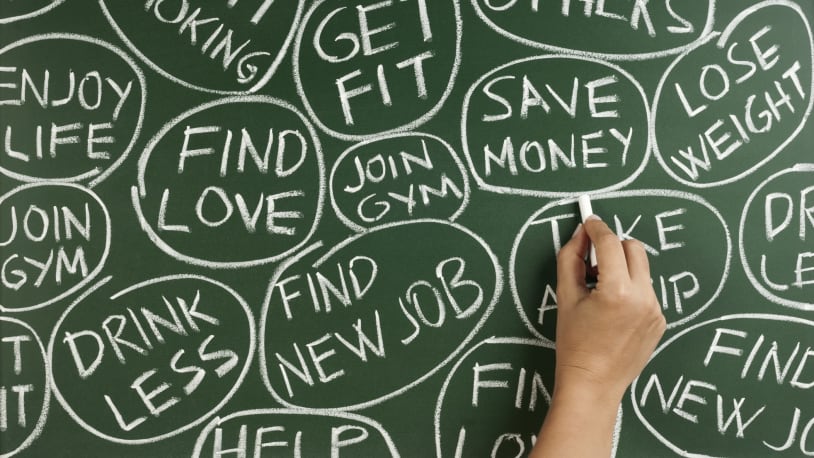 The flaw in New Year’s resolutions

Every January, nearly half of Americans pledge to make big changes. Why will most of us fail? Here’s everything you need to know:

How did the tradition start?

New Year’s resolutions go back at least 4,000 years, to the Babylonians. The ancient Mesopotamian culture is believed to be the first to have celebrated the new year, but in March, not January, to coincide with the start of the growing season. As part of Akitu, their 12-day religious festival, they pledged to the gods to repay debts and return borrowed items. During the Roman Empire, Julius Caesar established Jan. 1 as the start of the year around 46 B.C., and Romans used the month of January to reflect on the previous year and make promises of good behavior. The month itself was named for Janus, the god of beginnings and endings. In the Middle Ages, medieval knights renewed their pledges of chivalry at the end of the year with “The Vow of the Peacock,” placing their hands on the noble bird. The first recorded use of the term “New Year resolution” comes from a Boston newspaper in 1813. Around that same time, Walker’s Hibernian Magazine or Compendium of Entertaining Knowledge in Ireland satirized the tradition, suggesting that doctors should resolve to “be very moderate in their fees” and politicians to “have no other object in view than the good of their country.”

Why do so many people set New Year’s resolutions?

Surveys show that there is something irresistible and emotionally resonant about the possibility of fresh starts. There’s a reason why so many cultures share a version of the holiday, from the Western New Year on Jan. 1 to the Jewish and Chinese, or lunar, New Year’s celebrations in autumn and midwinter. The beginning of a new year is a milestone that can make people feel unusually inspired and optimistic, and dramatic personal transformations are one of our favorite things to imagine. “For most people, resolutions represent the fantasy of perfection — perfect body, perfect life, perfect feelings — without any of the reality,” said psychologist Sasha Heinz. Almost half of Americans make New Year’s resolutions every Jan. 1, but studies show that just 8 percent stick with them.

What are common resolutions?

A YouGov poll found that the resolution most frequently made was to exercise more. That was followed closely by losing weight, saving money, and adopting a healthier diet. Those trends have held true for years: A 2017 study found that about 55 percent of resolutions were health-related, with nearly one-third revolving around exercise and about 10 percent connected to healthier eating. About 34 percent were about work or personal finances and about 5 percent were social, including a vow to spend more time with family and friends.

Why do people fail?

Habits are, by definition, deeply ingrained, so even the best of intentions aren’t enough to turn an idealized future into reality. By mid-February, some 80 percent of people will give up on their resolutions. Research has found that rewarding habits like overeating or overspending are very hard to quit, and that we need to feel rewarded by — and actually learn to enjoy — our new habits if they’re going to last. Many people also dream too big, as if they will wake up a wholly new person on Jan. 1. Gym memberships spike in early January, as does physical activity measured by workout apps like Strava, but within weeks, there’s a steep drop-off. Analysts call this date, often in early February, “Fall Off the Wagon Day” or “Quitter’s Day.” University of Chicago behavioral scientist Ayelet Fishbach refers to the challenge of sustaining change after the initial motivation has worn off but before the end goal is in sight as “the middle problem.” She says that humans need short-term successes to feel sufficiently rewarded to keep going and achieve long-term habit shifts.

How would that work?

To start, researchers advise, break up your goals into smaller, concrete, incremental steps, instead of jumping into major lifestyle changes that create great discomfort. Success with little challenges can be rewarding and build confidence — and new habits. Being specific is also critical: If you’re aiming to be a better family member, you can, for example, set aside 30 minutes a week for a visit or phone call with a relative. If you do no exercise at all and would like to become more active, start with a 15-minute daily walk rather than joining a gym or buying a $2,000 exercise machine that will soon gather dust. To put money into savings, Fishbach suggests setting a monthly goal, rather than an annual one. “Our goals may set the tone and motivate us to create habits,” said psychologist Charissa Chamorro of the Icahn School of Medicine at Mount Sinai. “But it’s actually engaging in daily, context-specific behaviors that creates a habit.”

Since almost everyone who sets a resolution fails to keep it, behavioral psychologists say, it’s time to re-­examine this tradition and find ways to set goals that are likely to be achieved. Big, sweeping lifestyle changes such as “I will avoid unhealthy food and exercise five times a week” are hard to sustain, but tiny ones such as “no more sweets” can also fail if they feel detached from any larger aim. Some psychologists suggest that three years of living with the uncertainty and stress of the pandemic has drained many people’s emotional resources, making it more difficult to take on major changes. Partly for that reason, the tradition of New Year’s resolutions appears to be waning among Millennials and Gen Zers, The New York Times has reported. Alex Boughen, 29, told the Times he got tired of always failing to keep his resolutions and of the accompanying negative feelings. He realized he could be more forgiving and gradually work up to his big-picture goals — he’d go on an after-­dinner walk if he missed a morning run, rather than beating himself up about not sticking to a strict plan. “If I don’t hit a goal one day, I just try again the next day,” he said. “It’s a much better strategy than waiting until the new year to try again.”

Every January, nearly half of Americans pledge to make big changes. Why will most of us fail? Here’s everything you need to know: How did the tradition start? New Year’s resolutions go back at least 4,000 years, to the Babylonians. The ancient Mesopotamian culture is believed to be the first to have celebrated the new year,…

Every January, nearly half of Americans pledge to make big changes. Why will most of us fail? Here’s everything you need to know: How did the tradition start? New Year’s resolutions go back at least 4,000 years, to the Babylonians. The ancient Mesopotamian culture is believed to be the first to have celebrated the new year,…

What were Kevin McCarthy’s speakership deals?