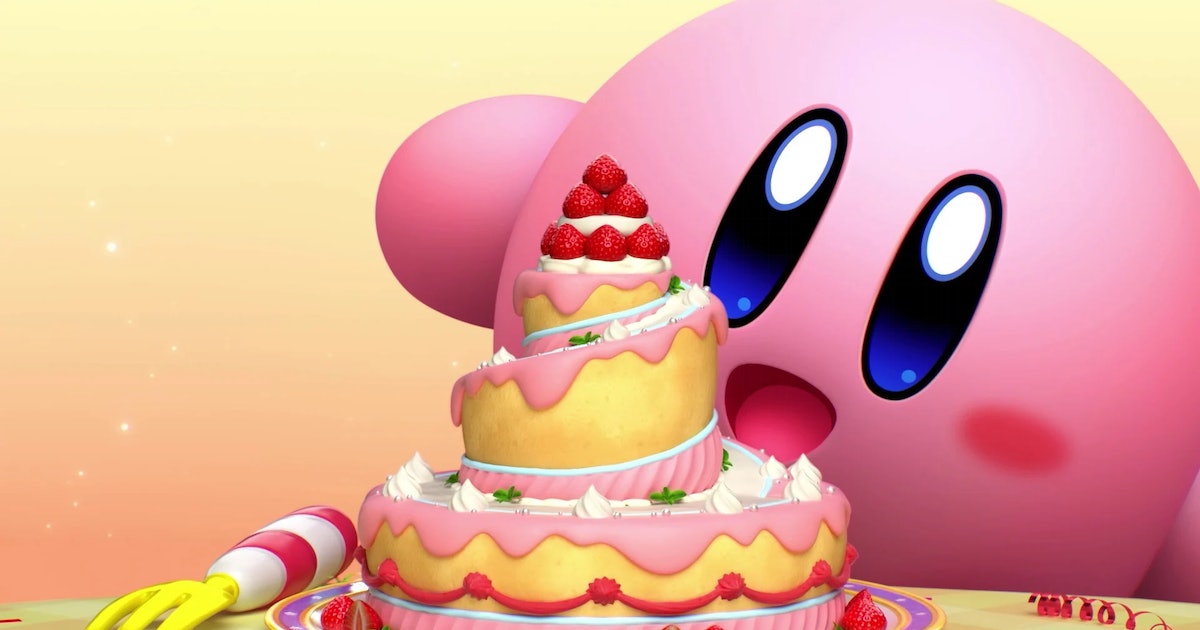 In Nintendo’s pantheon of characters, there are quite a few contenders for the most powerful. There are evil superbeings like Ridley and Ganon, and literal gods like Palutena and Arceus. But none can match the sheer raw, unrestrictive (and cuddly) power of Kirby.

Looking back over the games, there’s some pretty compelling evidence that Kirby might be the same species as many of the series’ one-eyed eldritch horror bosses. The hidden lore behind the pink fluffball reveals a secret potential that other Nintendo heavy hitters can’t hope to reach.

In his first appearance in 1992’s Kirby’s Dreamland for the NES, he lived on a small planet (later dubbed “Planet PopStar”) relaxing and eating to pass the time. That is until the snarky penguin hammer bro King DeDeDe stole all his food. This forced the lazy round boy to get off his ass and get back his snacks.

Over the past three decades, Kirby has traveled the galaxy and defeated anything that stood in his way. He has a litany of tools that he can pull from, like the warp star, that lets him move at light speeds from planet to planet. His star rod acts as the power source of the Fountain of Dreams, which supplies a good night’s sleep to the denizens of the universe. He’s used these tools in nearly every Kirby game to beat god-tier bosses, steadily adding more speed and strength to his already staggering power pool.

But Kirby is more than just a star-hopping glutton. Throughout the Kirby series, The Void is an omnipresent deity who is basically the most powerful being in the universe. His reincarnated forms are the final bosses in roughly half of the 14 mainline Kirby games currently released. Void Termina, the “Destroyer of Worlds” and final baddie of 2018’s Kirby Star Allies on Switch is the strongest of the bunch, made of pure darkness and evil.

Void creates these beings based on positive or negative emotions, so I, along with a handful of YouTubers and Redditors, suspect that Kirby is another reincarnation of the Void, just made with happier thoughts. That’s why he can take down these terrifying divine beings with relative ease. You aren’t going to see Ridley defeat the incarnation of the most powerful force in the universe any time soon.

But that’s far from the only reason that Kirby could crush Goku in a duel. In the 2016 Nintendo DS title Kirby: Planet Robobot, the ball of joy’s power is described as “infinite” and “immeasurable.” The underrated title gives Kirby a mech suit, which he doesn’t even really need to use. (What good is a drill when you can destroy or swallow anything in the known universe?) It’s more like he just goes with the flow and uses whatever is handed to him. Because he’s chill — and dangerous —like that.

In Nintendo’s Super Smash Bros fighting game series, Kirby has consistently been the only character that can copy the abilities of others. Mario’s fireballs, Captain Falcon’s punch, and even Palutena’s Heavenly Light are all at his disposal.

Both Kirby and Smash were created by Masahiro Sakurai, the famed director of some of Nintendo’s most iconic titles. When asked in November 2018 why Kirby was the only fighter to survive the Super Smash Bros. Ultimate World of Light trailer, Sakurai told Famitsu that his warp star was the only vehicle that could “defy the laws of physics” to escape an “assault (that) enveloped the ends of the galaxy.”

Kirby’s mightiness extends beyond the games, too. His name comes from lawyer John J. Kirby who defended Nintendo in court in the 1980s. Universal Studios had sued the Japanese gaming giant, claiming it owned the rights to “Kong” because of the character King Kong. The lawyer Kirby was able to prove that the use of the Kong moniker for a gorilla fell under the public domain, thus saving Nintendo from a costly settlement. Without the real-life Kirby, the virtual one would never be able to suck up enemies.

So next time you play Kirby, don’t just think of him as this lackadaisical sphere that wants to just suck up some fun. Put some respect on his name and treat him like an all-impressive deity who gives you dreams and repeatedly saves the universe.

In Nintendo’s pantheon of characters, there are quite a few contenders for the most powerful. There are evil superbeings like Ridley and Ganon, and literal gods like Palutena and Arceus. But none can match the sheer raw, unrestrictive (and cuddly) power of Kirby. Looking back over the games, there’s some pretty compelling evidence that Kirby…

In Nintendo’s pantheon of characters, there are quite a few contenders for the most powerful. There are evil superbeings like Ridley and Ganon, and literal gods like Palutena and Arceus. But none can match the sheer raw, unrestrictive (and cuddly) power of Kirby. Looking back over the games, there’s some pretty compelling evidence that Kirby…

Where to find Gimmighoul coins