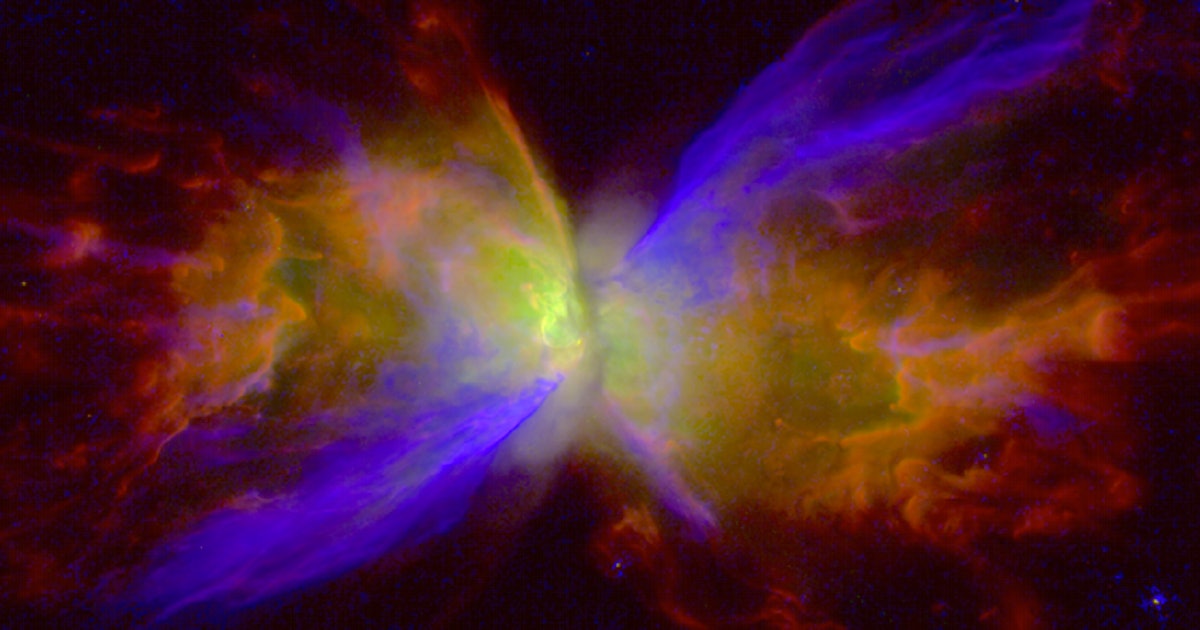 There’s something weird going on with the Butterfly Nebula.

The star (or stars) at the center of the nebula seem to blast powerful jets of energy out into space in random directions, creating chaos in the expanding gas that forms the Butterfly’s wings. Fourteen-year-old photos from the Hubble Space Telescope helped astronomers discover the mystery behind the jets, and infrared images from the James Webb Space Telescope might eventually help solve it.

What’s New — In ultraviolet images of the Butterfly Nebula captured by the Hubble Space Telescope, Bruce Balick of the University of Washington and his colleagues saw something shocking: the glow of ionized iron, which emits light in wavelengths shorter than the unaided eye can see, but only when it’s energized by something like a powerful shock wave.

“You see this line in supernovae remnants and in Herbig-Haro objects,” says Balick in a press conference at the 241st meeting of the American Astronomical Society. (A Herbig-Haro object is what happens when jets of gas blast out of a newborn star and slam into nearby gas clouds at terrifying speeds). “You rarely see it in planetary nebulae. So that right away was telling us something weird is happening.”

To get to the bottom of the weirdness, Balick and his colleagues compared Hubble Space Telescope images of the Butterfly Nebula from 2009 with more recent images captured in 2020. And the weirdness compounded. In most planetary nebulae — the expanding clouds of gas and dust created when a dying red giant star exhales its outer layers into space — the gas cloud expands at about the same speed in all directions. (There are some exceptions.)

However, in the wings of the Butterfly Nebula, gas is racing outward along a chaotic tangle of paths, driven by strong winds from the dust-shrouded star hidden at the heart of the nebula.

By comparing the two images, astronomer Lars Borchert, now of Aarhus Univesity, traced how gas in the nebula flowed during the 11 years between Hubble’s observations. He found paths carved by at least three pairs of powerful jets, each of which points in a different, seemingly random, direction. And based on the Hubble data, the jets appear to have blasted outward from the Butterfly’s parent star at three different times in the nebula’s history, between 2,300 and 900 years ago.

The star at the heart of the Butterfly Nebula shouldn’t be emitting jets, though. It should be, as Balick and his colleagues describe it, “a sputtering, largely moribund star with no remaining fuel.” The jets Borchert identified had blasted in six different directions, but somehow they all pointed at a new puzzle to solve.

Digging Into The Details — Most planetary nebulae are at least vaguely round, but some do have a distinct hourglass or wing shape, like the Butterfly Nebula. Usually, astrophysicists attribute that to a second star in the middle of the nebula, orbiting a shared center of gravity with the dense husk left behind by the dead giant star — a white dwarf with a companion star, in other words. The effects of the two stars’ gravity cause the nebula’s gas to expand in a pair of winglike lobes, instead of in more-or-less a sphere.

And a binary system could create a pair of jets, blasting out from the nebula in opposite directions — but if that were the case, they’d be steady and symmetrical. A white dwarf star stealing mass from its gassier companion wouldn’t blast jets into space in random directions like an Imperial Stormtrooper trying to hit a target. Something else has to explain what’s going on in the Butterfly Nebula.

Balick and his colleagues suggest a couple of possibilities, but Balick points out, “At this point, these are all just hypotheses.”

First, it’s possible that the white dwarf star at the Butterfly’s heart could have actually pulled its companion star so close that the two merged. That kind of collision can create complicated but strong magnetic fields that might explain the jets. On the other hand, the amount of energy moving gas around in the nebula is on the upper end of what a stellar merger could create.

But if the star system hidden behind a wall of stellar debris isn’t a binary, but a set of triplets, Balick says, that could explain the strange crisscrossing jets that seem to randomly erupt from it.

Two stars — a white dwarf and the partner from which it’s constantly stealing gas — could be orbiting fairly closely, while the third could be on a wider orbit, so that it only swoops by its two closer-knit companions once in a while. And every time that third star passes by, its gravity causes gas from the donor star to fall onto the white dwarf even faster — and it also wobbles the accretion disk, where material is spiraling inward toward the white dwarf’s surface.

The result, says Balick, would be “to send the outbursts off in different directions.” Bam, bop, and pow indeed.

What’s Next — “That’s as far in our understanding as we’ve gotten here,” says Balick. “The details really matter, and we are desperately trying to figure out ways to incorporate them in a sensible explanation.”

More data might help, especially infrared data from JWST. It’s especially good at seeing through layers of dust, like the ones that surround whatever is happening at the center of the Butterfly Nebula, because infrared light’s longer wavelengths can pass through dust that blocks shorter wavelengths, like visible light and infrared.

“We’re really talking about the behavior pattern of a star we can’t see,” says Balick. But that might not be the case for long.

There’s something weird going on with the Butterfly Nebula. The star (or stars) at the center of the nebula seem to blast powerful jets of energy out into space in random directions, creating chaos in the expanding gas that forms the Butterfly’s wings. Fourteen-year-old photos from the Hubble Space Telescope helped astronomers discover the mystery…

There’s something weird going on with the Butterfly Nebula. The star (or stars) at the center of the nebula seem to blast powerful jets of energy out into space in random directions, creating chaos in the expanding gas that forms the Butterfly’s wings. Fourteen-year-old photos from the Hubble Space Telescope helped astronomers discover the mystery…