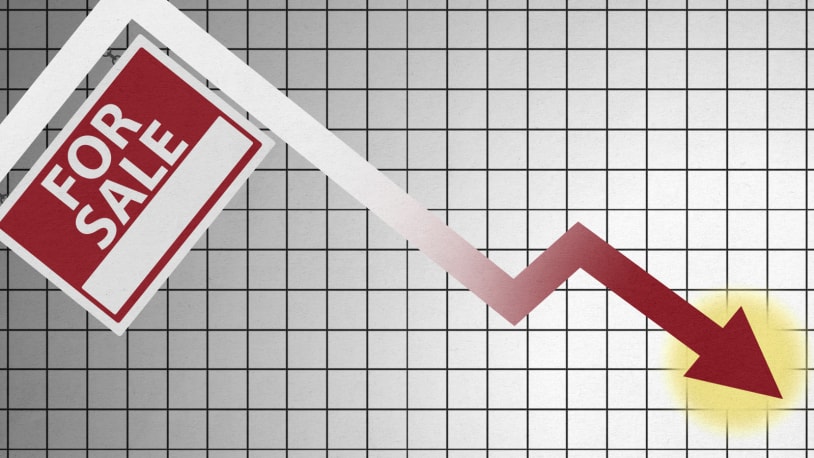 U.S. housing market predictions: Will prices go down in 2023?

Amid peaking prices due to inflation and murmurs of an upcoming recession, you might be wondering: What’s up with the housing market for 2023? Mortgage rates started to decline in the final weeks of 2022, and demand for housing is similarly expected to fall in the new year. Price growth is also expected to cool — though by how much remains unclear. Whether you’re a hopeful buyer or seller in 2023, or just someone who likes to keep tabs on the housing market, here’s a closer look at what to expect this year.

Where are housing prices headed in 2023?

Expect to see home prices continue to decline in 2023 from their recent record highs. Whether that cool-off will be a slow descent or a sudden drop is up for debate. Per Forbes, “[t]here are mixed signals from economists about if and when the housing market will crash, or if it will simply ‘correct’ itself from the double-digit percentage jumps seen in home prices the past year.”

A crash would mean a 20 to 30 percent drop in home prices, but some experts argue that the symptoms of that happening soon aren’t there yet. Rather, Rick Sharga, executive vice president of market intelligence at ATTOM Data, told Forbes that he estimates “about a 5 percent drop nationally,” with some markets continuing to see price increases. Kiplinger, meanwhile, predicts that “house-price growth will likely slow down to a 7 percent annual rate by year-end.”

What about mortgage rates?

As many potential homebuyers are likely well aware, mortgage rates shot sky-high in 2022 as the Federal Reserve hiked rates in an effort to control inflation. But toward the end of 2022, rates finally started to decline — and it’s expected that trend could continue in 2023.

Kiplinger explains that this drop was in reaction to the recent decline in the 10-year Treasury yield. However, mortgage rates remain “about a full percentage point higher in relation to the 10-year Treasury than would normally be expected.” This could be a positive sign of things to come, at least for mortgage rates, as Kiplinger notes that “[m]ortgage rates tend to stay higher for longer when inflation is high, whereas Treasury rates tend to be more sensitive to signs of economic slowing.”

If you’re hoping for a plethora of options as a home shopper in 2023, you might not find them. This is likely the case for existing homes, but perhaps even more so for new builds.

Forbes notes that “those who purchased homes in recent years at extremely low mortgage rates are staying put,” evidenced by a steady decline in existing home sales in the past year. However, Kiplinger argues that there could be a chance for a recovery in existing home sales by the end of the year if home affordability improves as anticipated.

The picture is less rosy when it comes to new builds. Even though new home sales increased somewhat toward the end of 2022, Kiplinger reports that inventory may not pan out, given “an elevated share of that inventory is homes where construction has not yet started, and those projects may not materialize, given the weak conditions in the housing market.”

Housing starts continued to tumble toward the end of 2022, particularly for single-family homes. Builders might continue to hold off in 2023 “amid soaring mortgage rates and elevated costs for building materials,” according to Kiplinger.

Is this year a good time to buy a house?

While you might be hoping for a simple yes or no, the answer to this question is highly personal. It really depends on what your current financial situation is and what your needs are. Here are four questions to ask as you decide:

Are you ready to commit to a location?

Buying a house is a commitment — typically, it’s recommended that you stay in a house for at least five years to offset the costs of the transaction, per Kiplinger. While people can and absolutely do end up selling sooner than that, it’s better to ask yourself if you’re really serious about settling down in a particular place before you buy.

Before you get carried away with favoriting pretty homes on Zillow, see what’s financially feasible. If you’re already stretched thin, adding a mortgage to the mix likely isn’t a great idea. And then there’s also the question of how much you can spend on a home, taking into consideration that home ownership also involves costs like heating and cooling, water, etc. One trick  Kiplinger offers for figuring this out: “Lenders usually require that the principal, interest, taxes, and insurance expenses be less than 28 percent of your monthly gross income.”

Have you saved up for a down payment?

Even if you take out a mortgage, you’ll still have to put some money down to purchase a home. The minimum required down payment is generally 3 percent, though Kiplinger says that “typical new home buyers put down 6 percent, on average.” But if you want to avoid private mortgage insurance getting tacked onto your already stiff monthly mortgage payments, you’ll need to put down at least 20 percent.

Amid peaking prices due to inflation and murmurs of an upcoming recession, you might be wondering: What’s up with the housing market for 2023? Mortgage rates started to decline in the final weeks of 2022, and demand for housing is similarly expected to fall in the new year. Price growth is also expected to cool…

Amid peaking prices due to inflation and murmurs of an upcoming recession, you might be wondering: What’s up with the housing market for 2023? Mortgage rates started to decline in the final weeks of 2022, and demand for housing is similarly expected to fall in the new year. Price growth is also expected to cool…