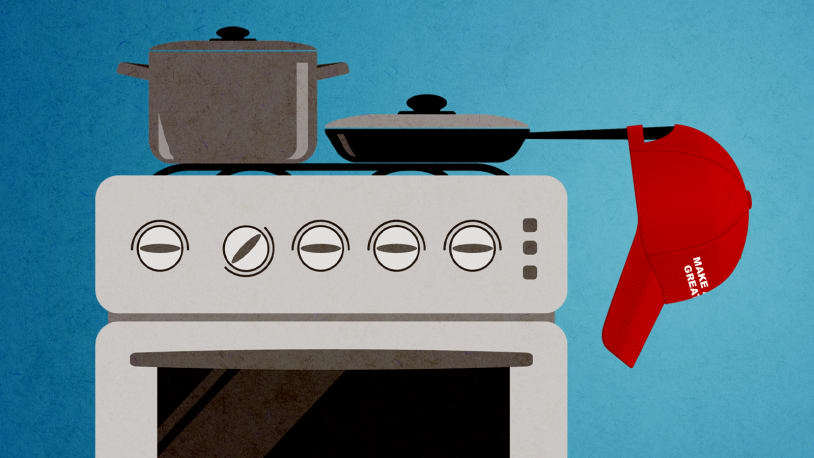 The next front in the culture wars: Gas stoves

Typically, the phrase “America’s culture wars” calls to mind hot-button social issues like LGBTQ rights, immigration, or questions of gun control — the sorts of things that often fall along the country’s broad partisan lines. What the phrase is less likely to invoke, however, is a question of what type of kitchen appliance a person has in their home. At least, that was largely the case until this week, when Consumer Product Safety Commission member Richard Trumka Jr. told Bloomberg that his panel was looking into new research that shows gas stoves are a significant source of childhood asthma, as well as assessing the various environmental dangers traced back to the common kitchen appliance. As to what the CPSC might actually do to mitigate those health risks, Trumka was circumspect, saying merely that “any option is on the table,” adding that “products that can’t be made safe can be banned.”

A government agency tasked with protecting consumers announcing that it is exploring ways to protect consumers from a demonstrable health risk is usually not all that noteworthy. However, news of the potential for federal action against gas stoves — the sort found in an estimated 40 million homes, according to a group of lawmakers who last month urged the CSPC to look into the matter — was enough to propel the appliances to the culture war frontlines, with elected officials from both sides of the aisle falling back on conspicuously martial language in their efforts to defend Americans’ freedom to pump their kitchens full of gas. Here’s everything you need to know:

What are lawmakers saying about gas stoves?

What followed Trumka’s comments was a conservative media feeding frenzy and hyperbolic reactions from (mostly) Republican lawmakers, then reactions to those reactions, and so on. Somewhat surprisingly, the full-throated pushback to the theoretical prospect of federal action to mitigate documented health risks echoed the rhetoric and intensity around Second Amendment rights.

I’ll NEVER give up my gas stove. If the maniacs in the White House come for my stove, they can pry it from my cold dead hands. COME AND TAKE IT!!

Gas stoves are the next thing the Biden Administration is coming after in their latest power grab. Washington bureaucrats should have no say in how Americans prepare their dinner.https://t.co/QekGcklwog

.@JoeBiden, get your hands off our gas stoves!!!!If you know ANYTHING about cooking, there is nothing like cooking on a gas stove. Democrats want to ban gas stoves. Republicans want to LEAVE YOU ALONE. https://t.co/EGFza6H5Cn

Democrats are coming for your kitchen appliances. Their desire to control every aspect of your life knows no bounds—including how you make breakfast. They just can’t help themselves. https://t.co/VT97QNcJDb

This is a recipe for disaster. The federal government has no business telling American families how to cook their dinner. I can tell you the last thing that would ever leave my house is the gas stove that we cook on. https://t.co/8IEFM44UvE

Trumka himself also weighed in on the backlash, assuring Rep. Gary Palmer (R-Ala.) that “CPSC isn’t coming for anyone’s gas stoves,” and any forthcoming regulations would only apply to “new products.”

Thanks for your interest!To be clear, CPSC isn’t coming for anyone’s gas stoves. Regulations apply to new products. For Americans who CHOOSE to switch from gas to electric, there is support available – Congress passed the Inflation Reduction Act which includes a $840 rebate. https://t.co/fcmWMSSfE5

Will the strong reactions really matter?

On a certain level, no, not really. To date, no one has actually banned, or even placed restrictions, on anyone’s gas stoves. In a letter to the CSPC last month, a group of Democratic lawmakers requested a fairly anodyne list of ways the commission could address the health risks posed by gas stoves, including:

Warnings, labels, and uniform performance standards are fairly expected consumer protection actions overall. What was less expected was the supercharged, gun-tinged reaction from Republican lawmakers who quickly positioned stoves as an issue of populist freedoms over governmental overreach. Similar consumer protection actions in the past faced resistance from discrete trade groups whose business was poised to be affected, and even those — like seatbelt laws — which did rouse widespread backlash from the public at large were argued in decidedly less hyperbolic terms.

Why does this seem vaguely familiar?

Conservatives have increasingly leaned on this type of all-or-nothing rhetoric in recent years, particularly in Texas, where the “Come and Take It” slogan is historically infused into the state’s general sense of self. There, lawmakers have used the phrase — and the implied threat thereof — to defend everything from limiting bathroom access for the transgender community to cooking turkey:

On the one hand, the drama of equating Second Amendment rhetoric with turkeys and kitchen appliances affords lawmakers the excuse of simply being silly online. At the same time, as Foreign Policy lays out, it can also flatten any subject into the overly simplified “you’re either with us or against us” paradigm that has largely come to define the country’s culture wars in recent years.

In his interview with Bloomberg, Trumka predicted that the CSPC would allow for public input on any gas stove regulatory moves comment sometime this winter. It seems, however, that the tone and tenor of one side of that forthcoming debate have already been decided.

Typically, the phrase “America’s culture wars” calls to mind hot-button social issues like LGBTQ rights, immigration, or questions of gun control — the sorts of things that often fall along the country’s broad partisan lines. What the phrase is less likely to invoke, however, is a question of what type of kitchen appliance a person has in…

Typically, the phrase “America’s culture wars” calls to mind hot-button social issues like LGBTQ rights, immigration, or questions of gun control — the sorts of things that often fall along the country’s broad partisan lines. What the phrase is less likely to invoke, however, is a question of what type of kitchen appliance a person has in…

The calls for Rep. George Santos to quit are coming from inside the house