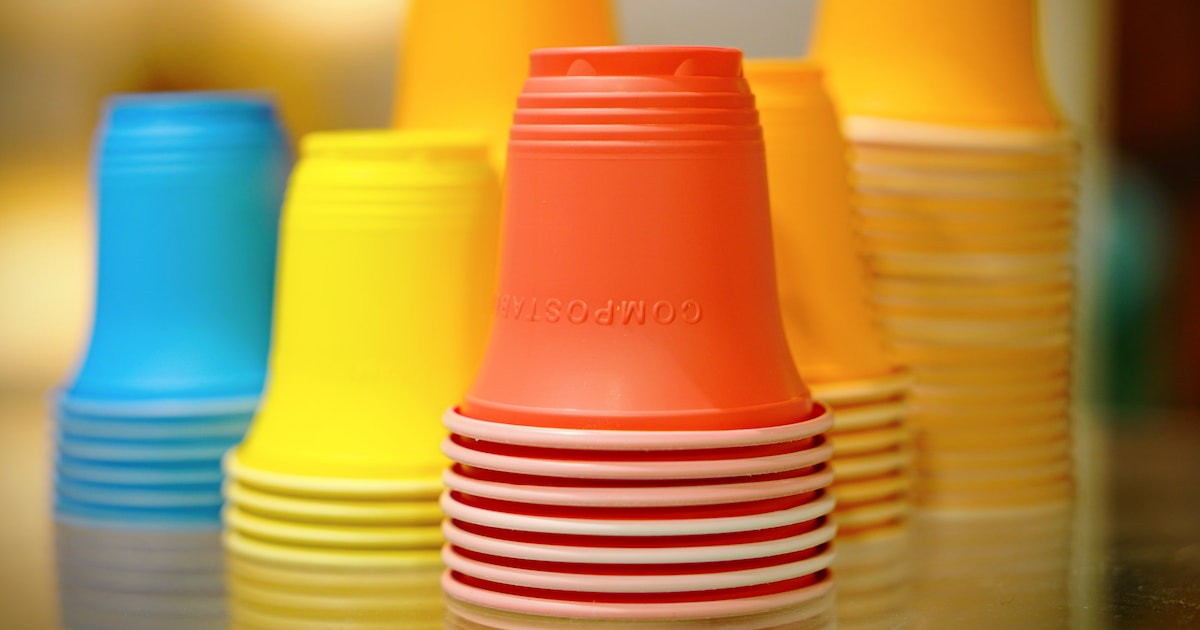 It’s the year 2050, and humanity has made massive progress in decarbonizing. That’s thanks in large part to the negligible price of solar and wind power, which was cratering even back in 2022. Yet the fossil fuel industry hasn’t just doubled down on making plastics from oil and gas — instead, as the World Economic Forum warned it would happen, it has tripled production from 2016 levels.

In 2050, humans are churning out trillions of pounds of plastic a year and, in the process, emitting the greenhouse gas equivalent of over 600 coal-fired power plants. Three decades from now, we’ve stopped using so much oil and gas as fuel, yet way more of them as plastic.

Back here in 2022, people are trying to head off that nightmare scenario with a much-hyped concept called “bio-based plastics.” The backbones of traditional plastics are chains of carbon derived from fossil fuels. Bioplastics instead use carbon extracted from crops like corn or sugarcane, which is then mixed with other chemicals, like plasticizers, found in traditional plastics.

Growing those plants pulls carbon out of the atmosphere and locks it inside the bioplastic — if it is used for a permanent purpose, like building materials, rather than single-use cups and bags.

At least, that’s the theory. In reality, bio-based plastics are problematic for a variety of reasons. It would take an astounding amount of land and water to grow enough plants to replace traditional plastics — plus energy is needed to produce and ship it all. Bioplastics can be loaded with the same toxic additives that make plastic and still splinter into micro-sized bits that corrupt the land, sea, and air.

And switching to bioplastics could give the industry an excuse to keep producing exponentially more polymers under the guise of “eco-friendliness” when scientists and environmentalists agree that the only way to stop the crisis is to just stop producing so much damn plastic, whatever its source of carbon.

Can bioplastics turn things around?

But let’s say there was a large-scale shift to bioplastics — what would that mean for future emissions? That’s what a new paper in the journal Nature set out to estimate, finding that if a slew of variables were to align — and that’s very theoretical — bioplastics could go carbon-negative.

The modeling considered four scenarios for how plastics production — and the life cycle of those products — might unfold through the year 2100, modeling even further out than those earlier predictions about the production through 2050. The first scenario is a baseline in which business continues as usual.

The second adds a tax on CO2 emissions, which would make it more expensive to produce fossil-fuel plastics, encouraging a shift toward bio-based plastics and reducing emissions through the end of the century. (It would also incentivize using more renewable energy to produce plastic.) The third assumes the development of a more circular economy for plastics, making them more easily reused or recycled, reducing both emissions and demand. And the last scenario imagines a circular bio-economy in which much more plastic has its roots in plants and is used over and over.

“Here, we combine all of these: We have the CO2 price in place, we have circular economy strategies, but additionally, we kind of push more biomass into the sector by giving it a certain subsidy,” says the study’s lead author, Paul Stegmann, who’s now at the Netherlands Organization for Applied Scientific Research but did the work while at Utrecht University, in cooperation with PBL Netherlands Environmental Assessment Agency. If all three conditions are met, he says, it is enough to push emissions into the negative.

It would take an astounding amount of land and water to grow enough plants to replace traditional plastics — plus energy is needed to produce and ship it all.

In this version of the future, people would still have to grow lots of crops to make bioplastics, but those plastics would be used — and reused — many times. “You basically put it into the system and keep it as long as possible,” says Stegmann.

To be clear, this is a hypothetical scenario, not a prediction, for where the plastics industry is actually headed. Many pieces would have to fall together in just the right way for them to work. For one, Stegmann and his colleagues note in their paper, “a fully circular plastics sector will be impossible as long as plastic demand keeps growing.”

Plastics companies will happily meet that demand by ramping up production, says Steven Feit, senior attorney at the Center for International Environmental Law, which did the emissions report showing what would happen if plastics manufacturing grew through the year 2050. “The pivot to petrochemicals has been the plan for years now for the broader fossil fuel industry,” he says. “It’s understood that plastics, as well as nitrogen fertilizers, are the two real pillars of petrochemicals, which are the engine of growth for fossil fuels.”

And as long as the plastics industry keeps producing exponentially more of it, there’s no incentive to keep the stuff in circulation. It’s just so cheap to manufacture, which is why recycling straight-up doesn’t work in its current form. (Among the many reasons why scientists are calling for negotiators of a new treaty to add a cap on production is that it would increase the price and demand for recycled plastic.)

Another wrinkle is that plastic can only be recycled once or twice before it becomes too degraded. Some products, like multilayered pouches, have become increasingly complicated to recycle, so wealthy nations have been shipping them all to economically developing countries to deal with, which is about as far from a circular economy as you can get.

Another issue is the space needed to grow the feedstock crops. “It increases the already huge pressure on land use,” says Jānis Brizga, an environmental economist at the University of Latvia, who studies bio-based plastics but wasn’t involved in the new paper. “Land use change has been one of the main drivers for biodiversity loss — we’re just pushing out all the other species.”

In 2020, Brizga published a paper calculating how much land it would take to grow enough plants for bioplastics to replace all the traditional plastics used in packaging. The answer: At a minimum, an area bigger than France requires 60 percent more water than the European Union’s annual freshwater withdrawal. (The new paper did model some land-use considerations, like restricting where biomass could be grown, but Stegmann says that a better understanding of the implications of this biomass growth is an avenue for future research.)

It would also take a whole lot of chemicals to keep those plants healthy. “Many of these crops are produced in intensive agricultural systems that use a lot of pesticides and herbicides and synthetic chemicals,” Brizga says. “Most of them are also very, very dependent on fossil fuels.”

And from a human health perspective, we don’t even want to keep plastics circulating around us. A growing body of evidence links their component chemicals to health problems: One study linked phthalates (a plasticizer chemical) to 100,000 early deaths each year in the U.S., and the researchers were being conservative with that estimate. Microplastics are showing up in people’s blood, breast milk, lungs, guts, and even newborns’ first feces because we’re absolutely surrounded by plastic products — clothing, carpeting, couches, bottles, and bags.

It’s also not clear what kind of climate effect the plastics will have after they’re produced. Early research on microplastics suggests that they release significant amounts of methane — an extremely potent greenhouse gas — as they break down in the environment. Even if a circular bioplastics economy attempts to keep carbon and methane locked up by turning plastics into long-term building materials or landfilling, whatever can’t be used again, nobody knows for sure if it will work. We need more research on how plastics off-gas their carbon under different conditions.

The more plastic we produce, the more corrupted the environment grows — it’s already poisoning organisms and destabilizing ecosystems. “I fear that by the time we get enough answers to all of our questions, it will be too late,” says Kim Warner, senior scientist at the advocacy group Oceana, who wasn’t involved in the new paper. “The train will have already left the station, for what it’s doing to the atmosphere and the oceans and carbon and health and everything else.”

This article was originally published on Undark by Matt Simon. Read the original article here.

It’s the year 2050, and humanity has made massive progress in decarbonizing. That’s thanks in large part to the negligible price of solar and wind power, which was cratering even back in 2022. Yet the fossil fuel industry hasn’t just doubled down on making plastics from oil and gas — instead, as the World Economic…

It’s the year 2050, and humanity has made massive progress in decarbonizing. That’s thanks in large part to the negligible price of solar and wind power, which was cratering even back in 2022. Yet the fossil fuel industry hasn’t just doubled down on making plastics from oil and gas — instead, as the World Economic…