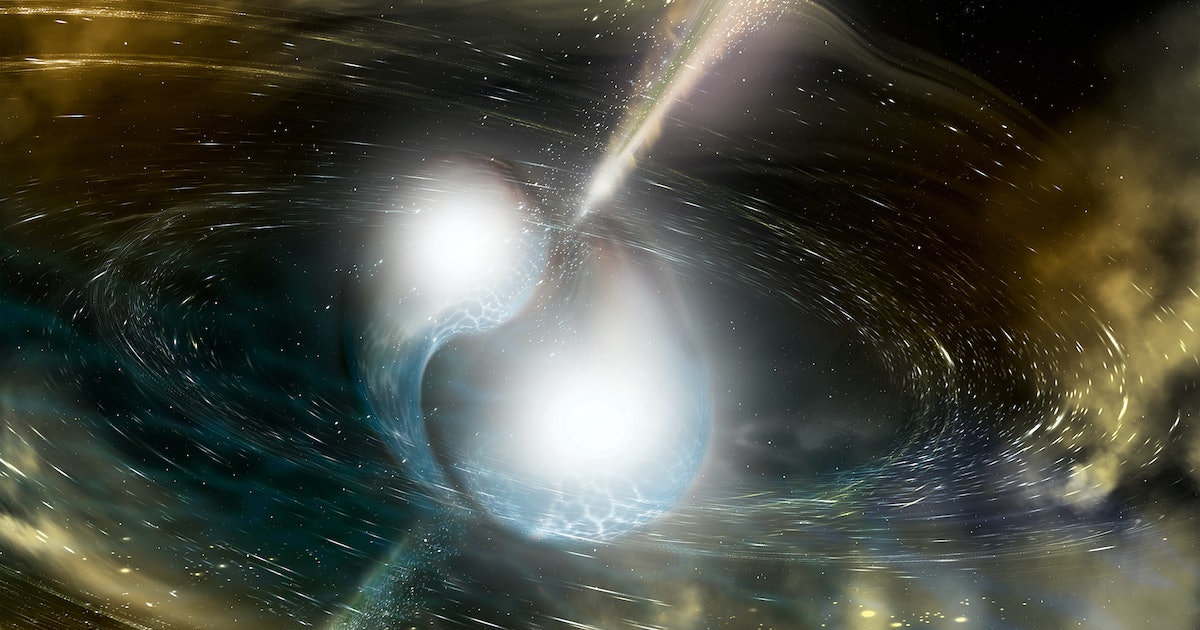 Cram the Sun into the diameter of a city, then do the same to a second star, and now have them clash. When this happens in the cosmos, reverberations in the fabric of space-time carry throughout the Universe.

This is the realm of the emerging science known as gravitational wave astronomy. Sometimes, astrophysicists at LIGO get lucky enough to notice these crashes. But the field is new and evolving. To understand the merger of two neutron stars — dense remnants of massive stars that met explosive ends as supernovae — astronomers are turning to archival data from energetic radiation that bursts out of these events.

While most neutron star-neutron star mergers result in a black hole, for a few rare moments, the neutron stars create one giant neutron star too fleeting to typically be detected. A new study published today in Nature offers a potential avenue to study this niche within gravitational wave astronomy.

Here’s the background — The pressures that create these ultra-dense objects cause a lot of mass to take up little space, and require subatomic particles to behave in ways they otherwise would not. The two neutron stars produce gravitational waves as they collapse into a black hole and expel a wide array of radiation — but not before fleetingly becoming a bizarre giant neutron star.

The giant neutron star explored in this scenario lasts for just a few milliseconds, thanks in part to the differential and rapid rotation of its material that keeps the stuff hanging together ever so briefly. Simulations suggest this hyper-massive neutron star should exist. Gravitational wave detectors aren’t sensitive enough to render their presence. Gamma ray detectors, however, can.

What’s new — Cecilia Chirenti, research scientist at the University of Maryland working at NASA Goddard Space Flight Center and associate professor of applied mathematics at the Federal University of ABC in Brazil, tells Inverse half-jokingly and half-seriously that she got “impatient” about the idea of waiting years for gravitational-wave detectors to be refined enough to showcase these clashes with more nuance. So she set out to see if there was another way to learn about the brief, wondrous life of a hyper-massive neutron star.

When two neutron stars merge, the event is high octane enough to produce gamma rays, which NASA has described as “the most energetic and luminous electromagnetic events since the Big Bang.”

“What we did was look into archival data for gamma ray bursts, to investigate whether we could find signatures of hyper-massive neutron stars in that data,” Chirenti tells Inverse.

In the paper, the researchers write that two bursts, GRB 910711 and GRB 931101B, oscillated at frequencies “broadly consistent with the expectations from numerical relativity simulations of double neutron star mergers.”

Why it matters — This may be an important step forward in multi-messenger astrophysics, by which scientists learn about a chaotic event or object by looking at various observation strategies — whether visual, radio, or something like gravitational wave detectors, which monitor ripples and distortions in the fabric of space.

The use of gamma ray burst data offers another avenue to learn about the crashes powerful enough to generate gravitational waves. In the paper, the researchers clarify that the oscillations from GRB 910711 and GRB 931101B might be stemming from interaction of a black hole with a neutron star, for instance. “Further modeling will, as always, be necessary,” they write, to determine what the true source was — but learning that these oscillations appear in gamma ray burst data is a good start.

“I think that the first big takeaway is that it is possible to use gamma rays as an alternative to the gravitational waves to find these hyper-massive neutron stars,” Chirenti says.

What’s next — Neutron stars are extreme environments, and add to that their supermassive phases, and they become a playground for researchers exploring quantum physics.

One possibility Chirenti offers is that, since the state of matter correlates to the gamma ray burst’s frequency, researchers can work backwards: thanks to what’s known through simulation data, they can ascertain the state of matter and the composition of the hyper-massive neutron star by knowing the frequency.

When gravitational-wave detectors get to the frequencies that gamma ray detectors can render, they’ll detect these hyper-massive neutron stars, too. But even when they are ready, gamma ray data that predates these detectors may reveal previously-unknown clashes from decades ago.

For now, Chirenti is enjoying what she describes as an accomplishment “very special to me.” The theorist found the first signs that she had a good hunch.

Cram the Sun into the diameter of a city, then do the same to a second star, and now have them clash. When this happens in the cosmos, reverberations in the fabric of space-time carry throughout the Universe. This is the realm of the emerging science known as gravitational wave astronomy. Sometimes, astrophysicists at LIGO…

Cram the Sun into the diameter of a city, then do the same to a second star, and now have them clash. When this happens in the cosmos, reverberations in the fabric of space-time carry throughout the Universe. This is the realm of the emerging science known as gravitational wave astronomy. Sometimes, astrophysicists at LIGO…

This leaf-inspired device could be the key to hydrogen farms