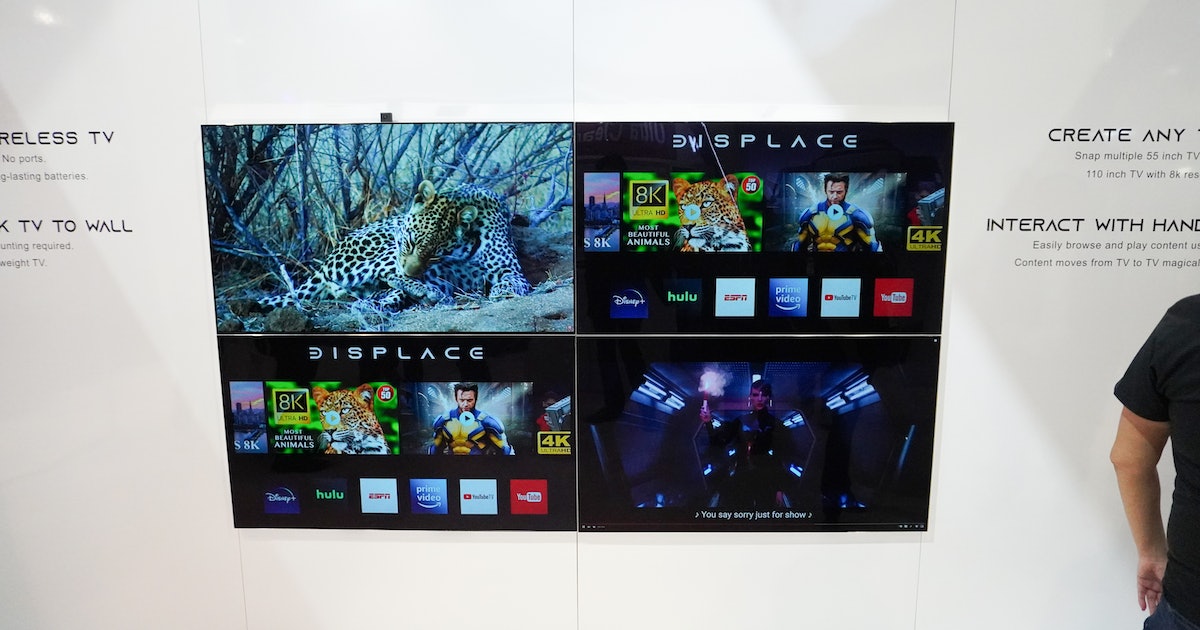 This wireless TV dares you to suction $3,000 worth of tech to your wall

Displace is making an ambitious bet on the future of home entertainment. The $2,999 Displace TV announced at CES 2023 and now available to reserve, is an entirely wireless television you can control with your hands.

So wireless, it’s designed to run on battery packs and vacuum seals to your wall rather than relying on mounts. In other words, perfect CES fodder — an out-there idea that has some merit but seems very hard to pull off. After seeing a unit on the show floor, I’m not so sure Displace is ready for primetime, but it is audacious. And if the competition is any suggestion, wireless is where TVs could be headed next.

The Displace TV uses a 55-inch LG 4K OLED panel with what seems like the benefits of great color reproduction, saturation, and dynamic range we’ve come to expect from LG’s own TVs. At a glance, the Displace TV is all-screen, with a metallic silver bezel around the edge as the only thing that interrupts the screen when Displace TVs are placed together.

The sides of the device are flat, with three slots on each side, two for removable batteries, and one that acts as a hand slot when moving the 20 lb TV around. With all four batteries in, Displace says the TV should last 30 days, with around six hours of watch time per day (the TV can be powered by just one battery on its own). The batteries themselves charge in a dock but Displace cautioned that the current design and even capacity of its batteries could change before the TV launches.

Without ports on the Displace TV, everything you watch is through apps loaded on the device itself. Displace says the TV’s custom operating system is based on Linux and can run a mixture of web and native applications, with the option to connect select hardware like game consoles to a wireless “base unit” as another possible input method.

If that sounds familiar, it’s because LG made a similar pitch at this year’s CES with its LG Signature OLED M, a “wireless” (it still has a power cord) TV that uses a separate box for sending over audio and video inputs. Besides the reliance on removable batteries, Displace’s main differentiator from LG is its use of motion controls and facial recognition through a retractable camera at the top of the Displace TV, “proprietary active-loop vacuum technology” for attaching the TV to any flat surface, and the ability to combine multiple Displace TV’s into a single display.

Rough around the edges

While these sound futuristic, they were also the features Displace couldn’t give me a clean demo of. I watched video footage of the Displace TV being vacuumed to a glass panel, but the live demo ended in the prototype TV crashing to the show floor and getting rushed behind the booth. Motion controls weren’t possible because of Displace’s poor internet connection at the Las Vegas Convention Center (motion controls are processed in the cloud) but are supposed to let you fling video content between Displace TVs or use your finger as an onscreen cursor.

Combined, these wrinkles suggest that the Displace TV is more fragile and finicky than it should be if it’s going to be the main way people watch their favorite shows at home. CES isn’t the ideal setting for showing off early hardware, but it’s hard seeing a TV fall off a wall and not be scared. Either way, Displace is confident. The company is already collecting $299 refundable reservations for the first 100 TVs it plans to ship in December. If you see the vision, you can even get a deal buying what would normally be multiple $2,999 TVs.

Whether Displace can pull off its futuristic gamble or not, the company is touching on an idea that could be big. Maybe only with those who can afford a risky tech purchase for now, but in a few years? We could all be swapping our TV batteries once a month.

INVERSE brings you everything from the weird, futuristic, and beautiful world of consumer technology at CES 2023. For all the latest technology coverage from the show, go to the INVERSE CES 2023 hub.

Displace is making an ambitious bet on the future of home entertainment. The $2,999 Displace TV announced at CES 2023 and now available to reserve, is an entirely wireless television you can control with your hands. So wireless, it’s designed to run on battery packs and vacuum seals to your wall rather than relying on…

Displace is making an ambitious bet on the future of home entertainment. The $2,999 Displace TV announced at CES 2023 and now available to reserve, is an entirely wireless television you can control with your hands. So wireless, it’s designed to run on battery packs and vacuum seals to your wall rather than relying on…