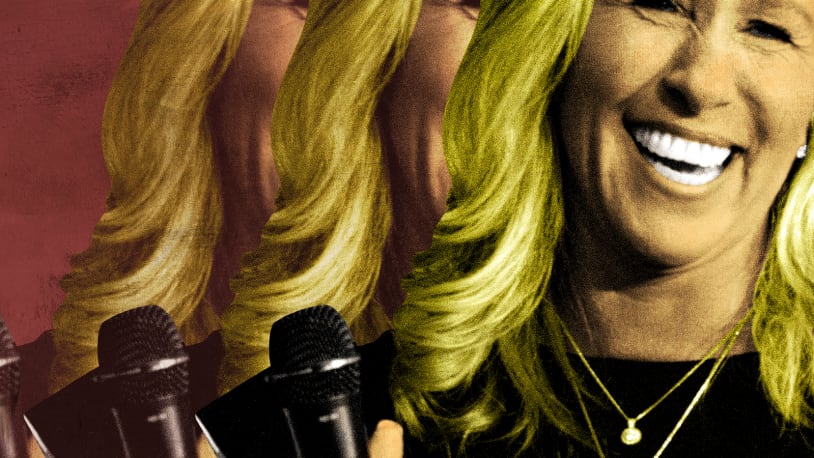 From the moment she was sworn into Congress in 2021, Rep. Marjorie Taylor Greene (R-Ga.) represented a seismic shift rightward for a party already pulling inexorably in that direction under then-outgoing President Donald Trump. A committed conspiracy adherent whose political capital was tied to extremist antics rather than legislative prowess, Taylor Greene spent much of her first term in office garnering headlines for a host of stunts and statements, even as she was ignominiously removed from her congressional committee assignments for the very same.

After handily winning re-election in 2022, Taylor Greene seemed in a prime position to forge ahead on the path she’d begun carving the year before, thanks to an incoming GOP House majority with a newly expanded bloc of lawmakers cast by large measure in her own mold. Instead, to the surprise of many, Taylore Greene spent the closing months of 2022 and the opening days of 2023 playing an entirely different role than her tenure thus far would have suggested: that of a team-player for the Republican establishment. Here’s everything you need to know:

Perhaps the most overt sign of Taylor Greene’s ongoing metamorphosis into an aspiring mainstream operator has been her stalwart support of former Minority Leader Kevin McCarthy (R-Calif.) in his quixotic bid to become the next speaker of the House. “I actually think that’s a bad strategy [to vote against McCarthy] when we’re looking at having a very razor-thin majority, with potentially 219 [seats],” Taylor Greene told former Trump advisor Steve Bannon this past November. “We’re talking about one vote.”

Since that initial boost to McCarthy’s aspirations, Taylor Greene has only doubled down on her support for the man many of her fellow Freedom Caucus members have accused of being, in the words of Arizona Republican Andy Biggs, “created by, elevated by, and maintained by the establishment.”

Indeed, the very language Taylor Greene has been using in her defense of McCarthy suggests her decision has been as much about tactical self-positioning within the GOP — demonstrating an ostensible concern for the party as a whole — as it is a question of ideological compatibility between the two.

If the base only understood that 19 Republicans voting against McCarthy are playing Russian roulette with our hard earned Republican majority right now.This is the worst thing that could possibly happen. https://t.co/ncY6GgGIM1

As Axios reported earlier this month, “Greene is betting that backing up McCarthy in his time of dire need will pave a path to legitimacy and power if he becomes speaker. She’s increasingly drawing herself closer to the establishment without abandoning her bombastic rhetoric and contentious ideology.” In doing so, Axios noted, Taylor Greene is following in the footsteps of Ohio’s Jim Jordan, who plotted his own route from far-right idealogue to insider power player within the GOP caucus.

“A decade ago, no one would have imagined that Jim Jordan would today be taking over one of the most influential committees in the House,” a GOP consultant told Axios. “What changed? He spent the last five years not just being a conservative firebrand on Fox News, but simultaneously building respect and relationships within Congress. It’s clear to me that MTG is attempting to plot a similar path to seriousness, while still retaining what made her popular to the base in the first place.”

Has she burned any bridges in the process?

Taylor Greene’s attempted pivot toward mainstream — or at least establishment — positioning has not gone unnoticed by her fellow ultraconservative Freedom Caucus colleagues. As one of the more vocal anti-McCarthy voices in the party’s rightmost wing, Rep. Lauren Boebert (R-Colo.) has found herself increasingly at odds with Taylor Greene, with whom she had previously been most closely linked.

“I’ve been aligned with Marjorie and accused of believing a lot of the things that she believes in,” Boebert told Real America’s Voice in December. “I don’t believe in [supporting McCarthy] just like I don’t believe in Russian space lasers, Jewish space lasers.” Taylor Greene, for her part, shot back at Boebert, accusing her of taking “our $$$ but when she’s been asked: Lauren refuses to endorse President Trump, she refuses to support Kevin McCarthy, and she childishly threw me under the bus for a cheap sound bite.”

In a not-so-tacit admission that her support for McCarthy is part of a broader plan to amass establishment clout, rather than remain a bomb-throwing outsider, Taylor Greene continued to lambast Boebert, as as well one-time touring partner Matt Gaetz, during a subsequent podcast interview with Bannon.

“Do you know why I’m upset?” Taylor Greene said. “Because Matt Gaetz, Lauren Boebert, and Scott Perry, the chairman of the Freedom Caucus, walked into Kevin McCarthy’s office last night and made their own personal demands about what subcommittee chairmanships they want to have, and who they want on committees, and who they want taken off committees. And guess what? The chairman of the Freedom Caucus negotiated nothing for me.”

One-time Republican Congressional Candidate and former Taylor Greene ally Laura Loomer has also lashed out at the congresswoman’s effort to reposition herself within the party, sparring with Taylor Greene over White Nationalist Nick Fuentes’ dinner with Kanye West and Donald Trump and tweeting that the congresswoman was a “cancer in our movement” for backing “the McStablishment”

Marjorie Traitor Greene disgusts me. Just look at how smug her face is front row with the McStablishment. She really is a cancer in our movement. She is a Trojan horse and she gets paid to undermine America First for RINOS like McCarthy. #NeverKevin pic.twitter.com/HEHNp03wJK

So where does she go from here?

Ultimately, Taylor Greene’s political future as a party insider will hinge on what sort of party the GOP becomes in the coming years. By so tightly aligning herself with McCarthy in the face of such rancorous opposition from her fellow far-right colleagues, she risks a diminished standing within her caucus should his bid to become speaker fall flat. Notably, her newfound allegiance to McCarthy stems from her pre-existing closeness with Trump, who has remained similarly stalwart in his support for the embattled former minority leader. And with that closeness comes the risk that, as Trump’s influence within the party wanes, so too will her respective position thereof.

Still, whether this latest move to frame herself as a happy warrior for the broader GOP succeeds or not, the undeniable truth is that Taylor Greene has, in more ways than one, already succeeded in mainstreaming herself within the party — not by changing her own brand of bombast, but by forcing the party to conform to her standards or risk losing its sway with an increasingly radicalized base.

“Such was the dangerous game of relevancy that Greene was pursuing,” New York Times Magazine’s Robert Draper mused this past October:

“In victory, her voice might well become drowned out amid the growing chorus of MAGA supplicants. Impeach Biden? When she first proposed it in January 2021, eyes rolled. Now it was all but a given that a GOP House majority would seize upon some rationale to swiftly begin impeachment proceedings. Democrats were not just radical socialists but Communists? Greene had begun making this assertion about Democratic members of Congress back in June 2021. Now even the National Republican Congressional Committee — the House GOP’s official political organization — has solicited donations warning of creeping Communism under Pelosi’s Democrats.” [The New York Times Magazine]

It’s a dynamic of which the congresswoman herself seems well aware. Can she maintain her personal influence within a party in which the very thing that made her stand out is now becoming normalized?

“Part of my problem is,” Taylor Greene told Draper for his piece, “I’ve been too early.”

From the moment she was sworn into Congress in 2021, Rep. Marjorie Taylor Greene (R-Ga.) represented a seismic shift rightward for a party already pulling inexorably in that direction under then-outgoing President Donald Trump. A committed conspiracy adherent whose political capital was tied to extremist antics rather than legislative prowess, Taylor Greene spent much of…

From the moment she was sworn into Congress in 2021, Rep. Marjorie Taylor Greene (R-Ga.) represented a seismic shift rightward for a party already pulling inexorably in that direction under then-outgoing President Donald Trump. A committed conspiracy adherent whose political capital was tied to extremist antics rather than legislative prowess, Taylor Greene spent much of…