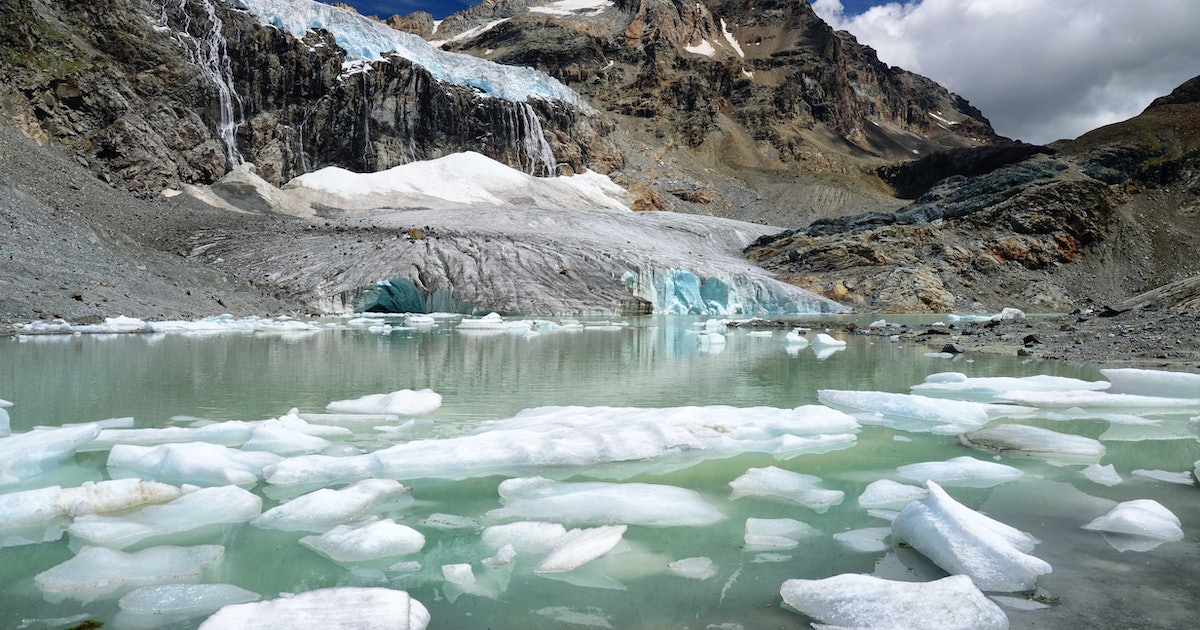 Anyone who’s been paying attention to the news lately knows glaciers are in big trouble. But while many headlines tend to focus on the melting of the massive Greenland and Antarctic ice sheets, the world’s smaller glaciers are in even greater jeopardy due to climate change.

New research finds that likely half of the world’s glaciers will disappear by the end of the century — and that’s in the best-case scenario. We can still try to save the rest, but we need to act fast to curb global warming, scientists say. The findings were published Thursday in the journal Science.

Here’s the background — Under the landmark Paris climate agreement in 2015, world leaders pledged to limit global warming to well below 2 degrees — and ideally 1.5. degrees Celsius.

Keeping climate change under these crucial tipping points could help us avoid the worst and most extreme outcomes — including substantial glacial melt and subsequent sea level rise.

But right now, our world is on track to warm by 2.7 degrees, and more extreme models suggest we could even reach 4 degrees Celsius if we do little to cut back on carbon dioxide-emitting fossil fuels — the primary cause of global warming.

In the Science study, scientists sought to understand the impact of each additional degree of global warming on glacier melt — and the results were grim.

“By projecting glacier changes for each degree of warming, we are able to understand… the number of glaciers that will be completely lost by the end of the century,” David Rounce, assistant professor of civil and environmental engineering at Carnegie Mellon University, tells Inverse. Rounce is the lead author of the study.

According to the research, even in the best-case scenario, glaciers will still lose a significant percentage of their mass by 2100. They examined three scenarios:

In an ideal scenario where we limit temperature increases to 1.5 degrees Celsius, the world’s glaciers will likely lose a quarter of their mass by the end of the century. That degree of glacial melt will have two effects.

First: sea levels will likely rise by an average of 3.5 inches, though the actual amount of sea level rise could vary between 2.5 inches and 4.5 inches due to uncertainty in the calculations.

So, even if we succeed in keeping global warming to 1.5 degrees — something the UN says is unlikely — we’ll still be saying goodbye to many of the world’s beloved and vital glaciers.

2. Under our current warming scenario

But the reality is that we likely won’t be able to keep global warming under 1.5 degrees Celsius. According to the COP26 climate conference, a 2.7-degree warming scenario is more likely given our projected global fossil fuel emissions.

Under our current warming trajectory, “widespread deglaciation” will occur in most middle-latitude or temperate regions of Earth between 35 and 65 degrees North and South. In other words: most smaller glaciers in this region will disappear. Sea levels will also likely rise by 4.5 inches on average, though the actual amount could vary between three and six inches due to scientific uncertainty.

1. Under an extreme warming scenario

The scientists also considered what would happen to the world’s glaciers under a more extreme warming scenario of 4 degrees Celsius — a warning call if the world’s leaders fail to make good on their net-zero commitments and green pledges to curb fossil fuels.

Under 4 degrees of warming, a staggering 83 percent of glaciers will disappear (plus or minus seven percentage points due to scientific uncertainty). Such a rate of melting translates to a whopping six inches of sea level rise.

How they made the finding — The researchers were able to provide the most comprehensive overview to date of the world’s glaciers based on a novel method known as a flowline model.

“A flowline model is an approach that we use to update the geometry of the glacier annually,” Rounce says.

These models have been used to model individual glaciers, but are just now being implemented on supercomputers to predict glacier loss on a global scale. The researcher also relied on the latest data on glacier loss from a 2021 Nature paper to make sure their model was up-to-date.

“By calibrating our model with these data, we have a much more complete and detailed picture of the present-day glacier mass change compared to previous models,” Rounce adds.

Why it matters — The study demonstrates that glacier loss is happening shockingly fast. Many of the world’s glaciers will be lost due to global warming that has already occurred. Sea level rise from glaciers threatens coastal cities, and millions of people around the world depend on glaciers for drinking water.

Most of the glaciers that are likely to disappear are less than one kilometer (0.6 miles) in size — the research excludes the much larger Greenland and Antarctic ice sheets — but they are still invaluable to the world.

“The climate emergency has never been clearer”

The researchers write that “regardless of their small size, their disappearance may still negatively affect local hydrology, tourism, glacier hazards, and cultural values.”

But the bigger finding of the study is not that glaciers will disappear — which we already knew — but that the degree of warming makes a crucial difference in how many disappear and how fast they will melt.

“One of the key findings of our study was that the [glacier] mass loss was linearly related to temperature increases,” Rounce says.

Western Canada and the U.S are projected to lose between 60 and 100 percent of their glaciers depending on the degree of global warming. Sea level rise would peak around 2035 under a 1.5-degree warming scenario but would steadily increase to the end of the century on a 4-degree warming trajectory.

Our actions now will determine if we live in a world with considerably fewer glaciers — or very few at all. As the researchers stress, “every fraction of a degree of temperature increase substantially affects glacier mass loss.”

What’s next — The findings add an even greater sense of urgency to world leaders considering policies on climate change like investing in renewable energy.

If we want a fighting chance of saving our world’s glaciers, we need to limit further global warming by every fraction of a degree possible. The current outlook may be grim, but the projections also offer a glimpse of hope — so long as we act to halt climate change now.

“The climate emergency has never been clearer,” Aðalgeirsdóttir and James conclude in their related paper on the findings.

Anyone who’s been paying attention to the news lately knows glaciers are in big trouble. But while many headlines tend to focus on the melting of the massive Greenland and Antarctic ice sheets, the world’s smaller glaciers are in even greater jeopardy due to climate change. New research finds that likely half of the world’s…

Anyone who’s been paying attention to the news lately knows glaciers are in big trouble. But while many headlines tend to focus on the melting of the massive Greenland and Antarctic ice sheets, the world’s smaller glaciers are in even greater jeopardy due to climate change. New research finds that likely half of the world’s…