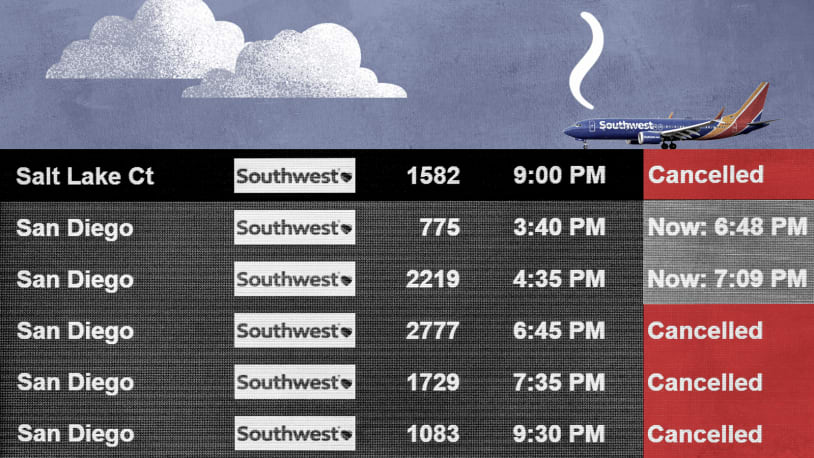 What to do about Southwest’s meltdown

Southwest Airlines canceled more than 15,000 flights last week in an operational meltdown that disrupted holiday plans for tens of thousands of holiday travelers. Even Monday, after the company said it had returned to nearly normal operations, Southwest canceled another 160 flights, more than any other U.S. airline, according to flight tracking site FlightAware. One passenger has already sued, accusing the airline of failing to provide refunds to stranded passengers.

Southwest blames the chaos on a massive winter storm that hammered much of the United States last week. But Transportation Secretary Pete Buttigieg wrote in a letter to the airline that many of the problems weren’t due to the weather. He said other airlines affected by the storm “recovered relatively quickly, unlike Southwest,” and vowed to hold the company accountable. Should the federal government impose changes to protect passengers from a repeat of this holiday-season disaster, or is this Southwest’s problem alone?

The federal government should enforce, and expand, passenger rights

Nobody’s perfect, says the Dallas Morning News in an editorial. “Mistakes and bad luck are part of life and business.” But it will take a lot of “responsive and compassionate customer service” for Southwest to bounce back from such “a reputation damaging moment.” In the meantime, Southwest and the entire commercial aviation industry “should rekindle a much overdue discussion of the rights of stranded passengers.”

We’ve been through this drill before. In 2021, Southwest canceled more than 2,000 flights over four days in October, and the much smaller rival Spirit canceled thousands of flights over a brief period that summer. “A federal airline passenger bill of rights covers bumping of passengers from flights, obligations to seat young children next to a parent, ticket price transparency, baggage rules, and a wide variety of rights cloaked in a lot of mitigating and confusing fine print.” Then as now, regulators have to step in to help “passengers obtain refunds with threats to take enforcement action.” It’s only fair.

Southwest is already going to pay a steep price for this mess “in damaged reputation,” says The Wall Street Journal in an editorial. “The only worse result for seething passengers would be to put Transportation Secretary Pete Buttigieg in charge.” After all, government meddling contributed to last week’s mess, because companies that received COVID aid couldn’t lay off employees, which prompted them to “offer retirement and buyout packages to preserve cash, leading to a pilot and crew shortage.”

Southwest’s problems stemmed largely from “outdated technology that failed to match crews to planes.” But Buttigieg has been pushing for mandatory refunds when flights are delayed more than three hours, and a group of 34 state attorneys general want “new power to enforce airline consumer-protection laws.” A regulation squeeze forcing airlines to “add unnecessary employees” is “a recipe for higher fares.” Air travel opened up after “Washington receded from airline management in the 1970s.” Getting politicians involved again “will make air travel worse and more expensive.”

Sorry, but we can’t count on Southwest to fix itself

“Southwest, we hope, is now committing millions of dollars to upgrading its technology so it will never fail at this level ever again; it has promised as much,” says the Chicago Tribune in an editorial. “And it should be held accountable.” But we can’t simply sit back and trust “Southwest to fix itself.” It’s perfectly reasonable to require prompt rebookings on other airlines when necessary, and “proactive additional compensation” for “innocent people” subjected to travel hell.

And there are regulation changes that even “our Grinchy friends at The Wall Street Journal Editorial Board” will like. The government should consider dialing back “the draconian federal regulations that cover crew workdays” in an emergency. “Safety must be the first priority, of course.” But that can be a more complex matrix than people realize: Is it safer for 160 stressed-out passengers to decide instead to drive through the snow — consider what happened in Buffalo, New York — rather than to allow a single flight attendant an extra hour or two of work so that a flight can take off?

Buttigieg might be part of the problem, says Karen Townsend at Hot Air. Rep. Nancy Mace (R-S.C.), who sits on the House oversight committee, “questions Transportation Secretary Buttigieg’s slow response, waiting four days into the crisis before weighing in.” Her teenage children were “stranded in Baltimore” during this mess, and she’s calling for an investigation to learn what happened.

Members of the pilots union and other employees “blame an antiquated communications system and scheduling software” for the chaos. Mace and her colleagues will be “asking for accountability for the billions of dollars in aid given to the airline during the pandemic and the funds included in the Biden infrastructure bill. What has all that money been used for, if not to update aging communication equipment and scheduling software?”

The least Southwest can do is submit to federal scrutiny

We should all be able to agree that something must be done to prevent another debacle like this one, says the Pittsburgh Post-Gazette in an editorial. Buttigieg has vowed to investigate, and Southwest CEO Bob Jordan has pledged to do better. The bottom line is that “if Southwest Airlines and the rest of the industry is happy to take billions of dollars from the government in relief, they should be willing to submit to close scrutiny from the Department of Transportation. We deserve more than an examination, we deserve oversight.”

Southwest Airlines canceled more than 15,000 flights last week in an operational meltdown that disrupted holiday plans for tens of thousands of holiday travelers. Even Monday, after the company said it had returned to nearly normal operations, Southwest canceled another 160 flights, more than any other U.S. airline, according to flight tracking site FlightAware. One…

Southwest Airlines canceled more than 15,000 flights last week in an operational meltdown that disrupted holiday plans for tens of thousands of holiday travelers. Even Monday, after the company said it had returned to nearly normal operations, Southwest canceled another 160 flights, more than any other U.S. airline, according to flight tracking site FlightAware. One…

Is Die Hard a Christmas movie?

What should happen to George Santos?