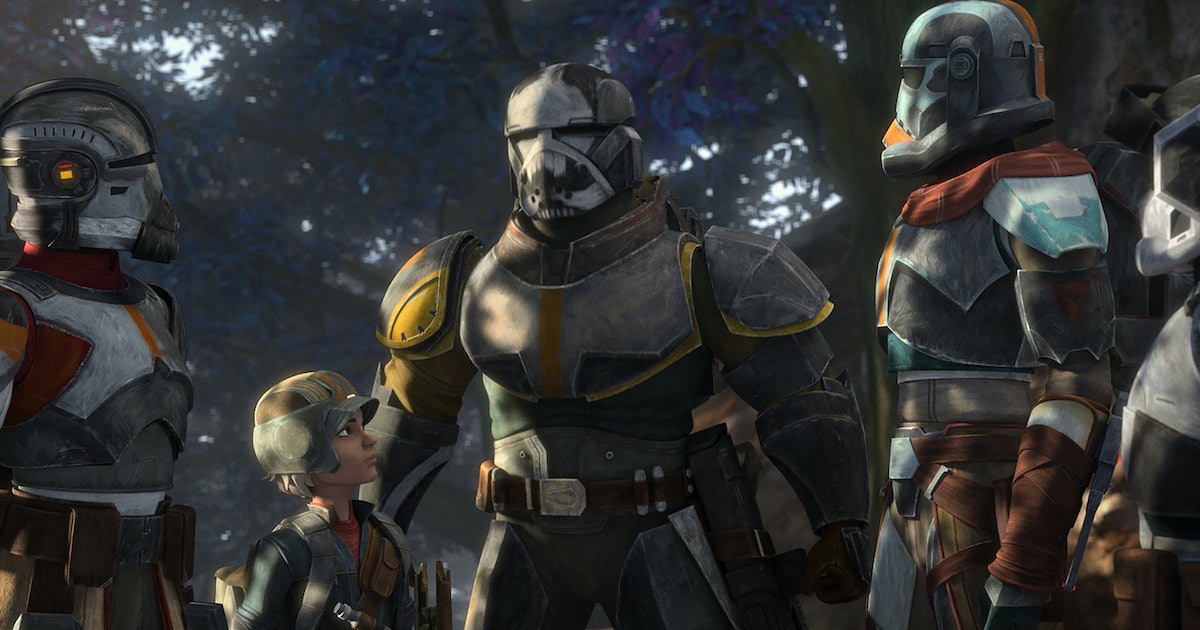 Star Wars canon is bent to its breaking point

In the ever-evolving story of Star Wars, it’s the little things that count. In The Book of Boba Fett, fans wondered about how the heck Luke even had Yoda’s small lightsaber. In Obi-Wan Kenobi, Ben broke tiny buttons on Darth Vader’s chest plate. Andor even gave us cogs that literally added up to the Death Star. But The Bad Batch chips away at our preconceived notions of Star Wars history, more than any of the other contemporary shows. And in the newly released second season, it does so in a small way that is actually bigger than it seems.

Like Season 1, The Bad Batch Season 2 follows the A-Team-esque misadventures of Clone Force 99, a group of misfits leftover from the Clone Wars, who all, collectively, adopted a young clone girl named Omega. The strongest and smartest thing about this setup is that Season 1 didn’t end up making Omega into a mystery box and Season 2 doesn’t either. The new season begins with a fairly run-of-the-mill storyline all about the Batch getting tasked with raiding Count Dooku’s leftover treasure, with the hopes of getting a big enough score that will earn them their freedom.

None of the details of any of this matter, because the two-part debut is really about setting up character stakes. Echo wants the Batch to do more work fighting the Empire, and Hunter wants to play it safe. The rest of the Clones are murkier about what they should be doing, partly because the story doesn’t really allow these people to have any real agency. Outside of young Omega, you feel that each member of Clone Force 99 is bound by Star Wars canon, even if they’re actively trying to break it.

The context of Star Wars: Rebels — which is roughly 10 years in the future of The Bad Batch — tells us that the only former Clone who was really actively working for the Rebellion was Captain Rex, and two other Clones named Wolffe and Gregor. In The Bad Batch, Rex is a side character, another Clone spun-off from The Clone Wars series, to create a kind of continuity bridge between that show and the future-tense world of Rebels. More of those kinds of cameos crop up in the rest of The Bad Batch Season 2, meaning if you’re connecting the dots from what Dave Filoni created in The Clone Wars and you love those connections in the newer shows (like Mandalorian) then, The Bad Batch can, in a sense, become another Rosetta Stone of Star Wars lore and continuity.

But, just like with Season 1, The Bad Batch Season 2 doubles down on its central thesis: Not all the Clones were down with Order 66, even the ones who obeyed it. And although Season 2 is emotionally affecting, and even conservative with its fan service, this central plotline continues to drive everything. In the final moments of the second part of the Season 2 premiere, we are once again encouraged to side with Clones who are still working for the Empire. And it’s here where the overall purpose of The Bad Batch gets a little murky.

If the show posited that it was really only the Batch, Rex, and a few other random Clones who didn’t like Order 66, then that wouldn’t change canon all that much. But, as the series goes on, it seems keener and keener on retconning Palpatine’s entire plan in Revenge of the Sith. If you were to take a moviegoer in 2005, make them time travel (via the World Between Worlds), and have them watch an episode of The Bad Batch in 2023, that person would be deeply confused. So, we’re now supposed to believe that many of those people who murdered the Jedi at the drop of a hat are not only remorseful but also part of a vast Imperial conspiracy that isn’t their fault?

In fairness, The Bad Batch Season 2 renders all of this intrigue as realistically as possible. And, this kind of retcon about Clones — and their eventual Stormtooper replacements — isn’t even a new retcon. The rules for how we were supposed to think and feel about the Clone Army were changed way back in 2008 when George Lucas himself spearheaded The Clone Wars series in the first place. And yet, because the murder of the Jedi and the rise of the Empire is such a huge pivot point in Star Wars history, knowing more about all of that is starting to get a bit messy.

What balances all of this out is Omega. She’s the secret weapon of The Bad Batch, partly because she’s a new-ish character that feels like she has true agency. Unlike the other Clones, she doesn’t feel like a variation on a theme, but instead, a new person. And, as a plot device, Omega creates a simple way for the majority of Clone Force 99 to remove themselves from messy canon problems in the future. She’s the smallest character in the show, and the mightiest because of it. If Hunter wants to get out of the way of the incoming tsunami of complex Star Wars lore (Solo, Obi-Wan, Rebels, Andor, et al.), then he has his stated reason: He doesn’t want Omega to grow up living a life where she’s fighting a star war every three seconds.

And yet, The Bad Batch is part of Star Wars. Although The Clone Wars has explored this idea before, perhaps the most interesting concept in The Bad Batch is the one thing the show may never be able to commit to: What would really happen when people in Star Wars stopped fighting?

The Bad Batch Season 2 is streaming on Disney+. New episodes drop on Wednesdays.

In the ever-evolving story of Star Wars, it’s the little things that count. In The Book of Boba Fett, fans wondered about how the heck Luke even had Yoda’s small lightsaber. In Obi-Wan Kenobi, Ben broke tiny buttons on Darth Vader’s chest plate. Andor even gave us cogs that literally added up to the Death…

In the ever-evolving story of Star Wars, it’s the little things that count. In The Book of Boba Fett, fans wondered about how the heck Luke even had Yoda’s small lightsaber. In Obi-Wan Kenobi, Ben broke tiny buttons on Darth Vader’s chest plate. Andor even gave us cogs that literally added up to the Death…