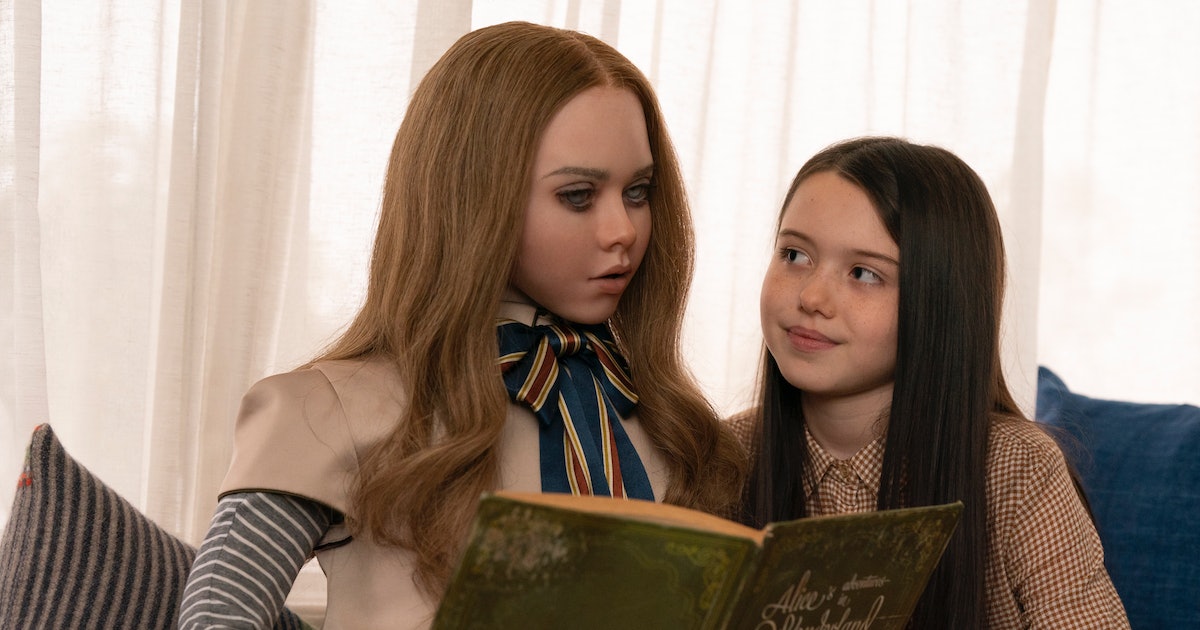 A perfectly programmed campy horror hit — with one small flaw

It was a viral dance seen around the world — and the making of a horror icon.

From the moment that M3GAN twirled, twerked, and cartwheeled her way toward one of her many bloody kills in the latest Blumhouse movie, it was clear: campy horror is in a new era, and it is thriving. M3GAN, directed by Gerard Johnstone from a screenplay by Akela Cooper and a story by Cooper and James Wan, picks up the bonkers, go-for-broke absurdity of Wan’s own Malignant and runs with it. But where Malignant so precariously balanced its wildly diverging tones to the point that people were unsure whether to scream or laugh, M3GAN is made to be memed. It’s woven into the viral dance scene, into one impeccably ludicrous needle drop, and into the scarily realistic face of the murderous doll — which, for some reason, every character just accepts as normal, or even cute.

But beneath the ridiculous antics of its uncanny-valley villain and Black Mirror-knockoff plot lies a surprisingly touching story about grief and family bonds. And even deeper beneath that is a movie where a killer robot rips off a child’s ear.

M3GAN is set in a world where toy companies have reached the bleeding edge of scientific innovation, which, in the case of the most popular product from the leading toy company Funki, is a Furby-like doll that can poop on command with the help of an app. Cady (Haunting of Hill House’s Violet McGraw, fast becoming one of the go-to horror child actresses) is one of the many happy owners of this doll, playing furiously with the app in the backseat of the car while her parents drive through a snowstorm. When the poop sound effects get on her mother’s nerves, the toy is taken away from Cady, who is on the verge of throwing a tantrum when a snow truck crashes into their car, killing Cady’s parents instantly.

Cady’s only guardian is Gemma (Allison Williams), her aunt and a roboticist at Funki working on an expensive personal project: the Model 3 Generative Android, aka M3GAN. Pressured by her boss (Ronny Chieng) for results and unsure how to help her grieving niece, Gemma accelerates the production of M3GAN, presenting it as the perfect companion for a developing child. Cady immediately takes this one-of-a-kind “toy,” and Gemma is secretly relieved when M3GAN can stand in as both parent and grief counselor. But Gemma hadn’t given much thought to how powerful M3GAN’s AI technology is, and soon everyone learns … there’s something wrong with M3GAN.

But the thing that’s wrong with M3GAN is what makes M3GAN work so well. This is a movie that delivers exactly what’s written on the tin. It’s a movie that can be defined (and marketed by) a sinister dance scene and a one-sentence elevator pitch: perfect doll defies its programming to kill. There’s no shortage of killer doll movies, but M3GAN sets itself apart from its predecessors by embracing the silliness of the premise and catering directly to the internet audience. M3GAN breaks out the millennial slang, plays pop songs that are immediately recognizable to the early aughts audience, and perfectly employs Allison Williams as our new-age social horror darling — a dash of her studied guilelessness of The Perfection, a sprinkle of her disarming ignorance in Get Out. Everyone, Williams especially, is on board for this movie’s very specific tonal tightrope, giving as much serious thought to the campy, borderline comedic, scenes as they do the scares. Chieng borders a little too far into cartoony at points, but Williams and McGraw’s strong emotional anchor at the center of the story makes up for it.

Perhaps the most pleasant surprise of M3GAN is the time it devotes to Cady’s grief, and Gemma’s inability to deal with it. At first glance, it’s a narrative shortcut to get Gemma to build M3GAN, but upon deeper inspection, it’s quite an affecting portrayal of the difficulties of parenthood and the potentially harmful effects of technology on child development. M3GAN becomes a crutch upon which Cady becomes dependent, even addicted to, to the point that Cady almost becomes as much of a problem as M3GAN herself. It’s all a bit Psychology 101, but M3GAN treats these elements with the same sincerity that it treats both its comedy and its horror, lending the whole thing a little more heft.

There is one big glaring missed opportunity, however. Some scenes, like the aforementioned ear-ripping scene, flirt with a more violent and grisly outcome, only to fall back into PG-13 territory. It makes one wonder how much more absurd and impactful M3GAN could have been if it just embraced an R-rating. Perhaps Blumhouse’s goal is to deliver a new camp-horror classic on par with Malignant but more easily accessible to the masses. But one can only wistfully think of a version of the dance scene where M3GAN hacks and slashes her way through various body parts while she twerked. Maybe we can save that for the sequel.

It was a viral dance seen around the world — and the making of a horror icon. From the moment that M3GAN twirled, twerked, and cartwheeled her way toward one of her many bloody kills in the latest Blumhouse movie, it was clear: campy horror is in a new era, and it is thriving. M3GAN,…

It was a viral dance seen around the world — and the making of a horror icon. From the moment that M3GAN twirled, twerked, and cartwheeled her way toward one of her many bloody kills in the latest Blumhouse movie, it was clear: campy horror is in a new era, and it is thriving. M3GAN,…

Brutal new teaser flips the franchise on its head