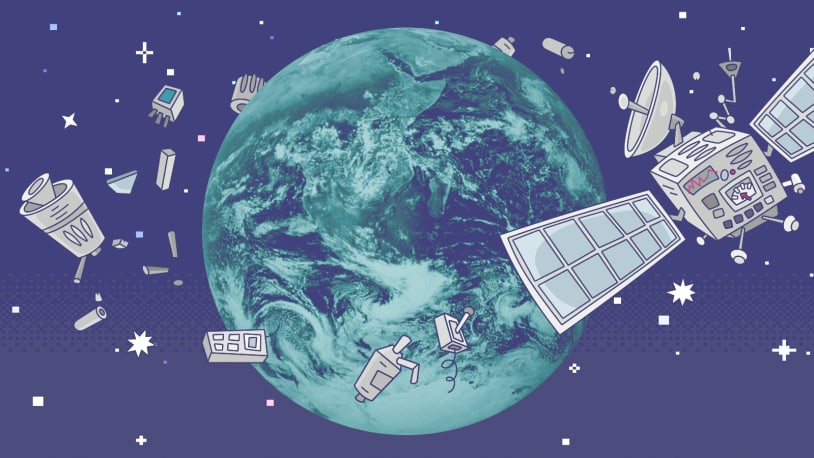 The growing problem of space junk

There are hundreds of millions of pieces of space debris hurtling above your head, ranging from pebble-size specks flying around the Earth at speeds of about 17,000 miles per hour to bus-sized satellites and rocket remnants. The active satellites help us communicate and understand and navigate our world. But the chaotic, kinetic tangle of space junk in lower orbit is a big problem with no easy solution. And we’re creating new space detritus every day. Here’s everything you need to know:

What is space debris?

Space debris, NASA says, “encompasses both natural meteoroid and artificial (human-made) orbital debris.” Since humans don’t have much control over meteoroids — except, maybe, for shooting them off course from Earth — NASA focuses on the orbital debris, or “any human-made object in orbit about the Earth that no longer serves a useful function,” including “nonfunctional spacecraft, abandoned launch vehicle stages, mission-related debris, and fragmentation debris.”

You can see how crowded the skies are with the University of Texas’ ASTRIAgraph map. The more satellites there are in LEO, the greater the chance they will collide, creating large quantities of new orbital debris.

Why is NASA so worried about orbital debris?

The increasing amount of orbital debris is a growing danger to “all space vehicles, including to the International Space Station and other spacecraft with humans aboard, such as SpaceX’s Crew Dragon,” NASA points out. Given the velocity of this orbiting debris, “even tiny paint flecks can damage a spacecraft.” Objects the size of blueberries orbiting the Earth “have the kinetic energy of a falling anvil,” while “the tens of thousands of pieces of trackable debris the size of a softball or larger that have the kinetic energy of a large bomb,” Ars Technica reports.

If you want to see the kind of damage orbital debris could inflict on the International Space Station, watch the movie Gravity.

Why should non-astronauts be concerned?

Well, “every once in a while, a piece of space junk hurtles through the atmosphere and crashes into Earth,” Stephanie Condon points out at ZDNet. In fact, a 23-ton piece of space debris from a Chinese rocket that unexpectedly broke apart “fell — safely, thankfully — into the south-central Pacific Ocean” in November, she adds, and without responsible stewardship of lower-Earth orbit, “randomly falling space junk will continue to threaten Earthlings with physical harm.”

Moriba Jah, an astrodynamicist and orbital debris expert at the University of Texas at Austin, predicts “we will see a loss of human life by (1) school-bus sized objects reentering and surviving reentry and hitting a populated area, or (2) people riding on this wave of civil and commercial astronauts basically having their vehicle getting scwhacked by an unpredicted piece of junk.” In fact, he told Ars Technica, “I predict that both those things are going to happen in the next decade.”

Beyond the chance of “randomly falling space junk” killing people on Earth, “collisions in space have the potential to disrupt all facets of everyday life,” ZDNet‘s Condon adds. “There’s a growing list of services — including communication tools, means of navigation, and financial services, just to name a few — that rely on satellites to function.”

Whose responsibility is the space junk?

“At the end of the day, based on international law codified in treaties and conventions from 1967 to 1972, liability for damage and harmful interference falls squarely on the shoulders of states party to the treaty,” Moriba Jah tells Ars Technica. Under Article XI of 1967’s Outer Space Treaty, governments are responsible for authorizing and overseeing any objects that go into space, so ultimately, “companies bear no liability for their behavior. Countries do,” he adds. So if a StarLink satellite hits and damages China’s Tiangong Space Station, the U.S. government would be on the hook, not Elon Musk.

“Governments, because they’re licensing and authorizing, get to hold their own people accountable,” Jah says. “The thing that needs to happen is countries need to be passing national space laws that incentivize environmental protection and sustainability.”

What can be done about the orbital debris problem?

The U.S. Federal Communications Commission (FCC), which regulates much of the activities of U.S. commercial satellites, adopted a rule in September requiring satellite operators to safely dispose of their orbiting hardware within five years of the satellite completing its mission. The previous U.S. guidelines advised companies to deorbit their satellites 25 years after their mission is over.

“Twenty-five years is a long time,” FCC chairwoman Jessica Rosenworcel said. “The second space age is here. For it to continue to grow, we need to do more to clean up after ourselves so space innovation can continue to respond.”

The five-year rule has “yet to be fully embraced by the international community — or even all lawmakers in the U.S.,” ZDNet‘s Condon writes. But it “has plenty of supporters in the space industry because, like Jah, they understand that space is a shared, finite resource.”

The United Nations also just passed a resolution designed to reduce the amount of orbital debris from the intentional destruction of satellites through anti-satellite missile system (ASAT) tests. The U.S., which voluntarily banned ASAT tests in April, proposed the draft resolution, and on Dec. 7, 155 countries voted in favor. Nine countries voted against the resolution, notably Russia and China.

And if all else fails, satellite operators will need to come up with better ways to protect their satellites or more precious space cargo. The European Space Agency is among the space bureaucracies spurring the development of better, stronger space shields to protect satellites and orbiting humans. The debris shield around the U.S. modules on the International Space Station, NASA says, “can be effective in withstanding impacts of particles smaller than half an inch.”

How do you clean up space junk?

Most satellite operators, when they have to take out the space junk, “dispose of it through ‘uncontrolled atmospheric re-entry’ — in other words, letting it burn up in the sky as it falls back to Earth,” Condon writes at ZDNet. That’s not ideal, since large debris sometimes doesn’t fully burn up before hitting the Earth, and the burn process releases harmful chemicals into the atmosphere in any case. The U.S. government has been working to figure out how to plausibly recycle the debris.

The White House in April released an In-space Servicing Assembly and Manufacturing (ISAM) strategy. ISAM capabilities, which could include repairing broken satellites, building new replacement parts, or refueling a spacecraft, aren’t entirely new, but they also aren’t widely used or commercially viable. The U.S. wants to help make in-orbit maintenance and recycling the exception rather than the rule.

For an idea of what that could look like, space infrastructure startup ThinkOrbital has designed a spherical orbital satellite that it envisions being auto-constructed in space, then used as a platform for servicing satellites and spacecraft, manufacturing, debris removal, or whatever else its clients request.

“We’re working on a hub and spoke concept where smaller satellites would go out and gather the debris, bring it back to a central location, process it, and we could either turn them into fuel or deorbit them,” said Lee Rosen, ThinkOrbital’s president and a former VP at SpaceX. “We could process debris at that hub, for example, and turn aluminum into aluminum powder that could be used for spacecraft fuel.”

“Even though all of outer space might be infinite, where we put satellites are very specific regions,” and “they’re becoming more congested,” Moriba Jah tells ZDNet. “It’s a true global commons,” adds Mark Dickinson, deputy CTO of the satellite service provider Inmarsat. “Space is up there, and no one owns any of it.” And if we do nothing, low-Earth orbit is going to become too crowded to use for the technology that makes our world run.

January 3, 2023 January 3, 2023 There are hundreds of millions of pieces of space debris hurtling above your head, ranging from pebble-size specks flying around the Earth at speeds of about 17,000 miles per hour to bus-sized satellites and rocket remnants. The active satellites help us communicate and understand and navigate our world. But…

January 3, 2023 January 3, 2023 There are hundreds of millions of pieces of space debris hurtling above your head, ranging from pebble-size specks flying around the Earth at speeds of about 17,000 miles per hour to bus-sized satellites and rocket remnants. The active satellites help us communicate and understand and navigate our world. But…

What is speedcubing? | The Week