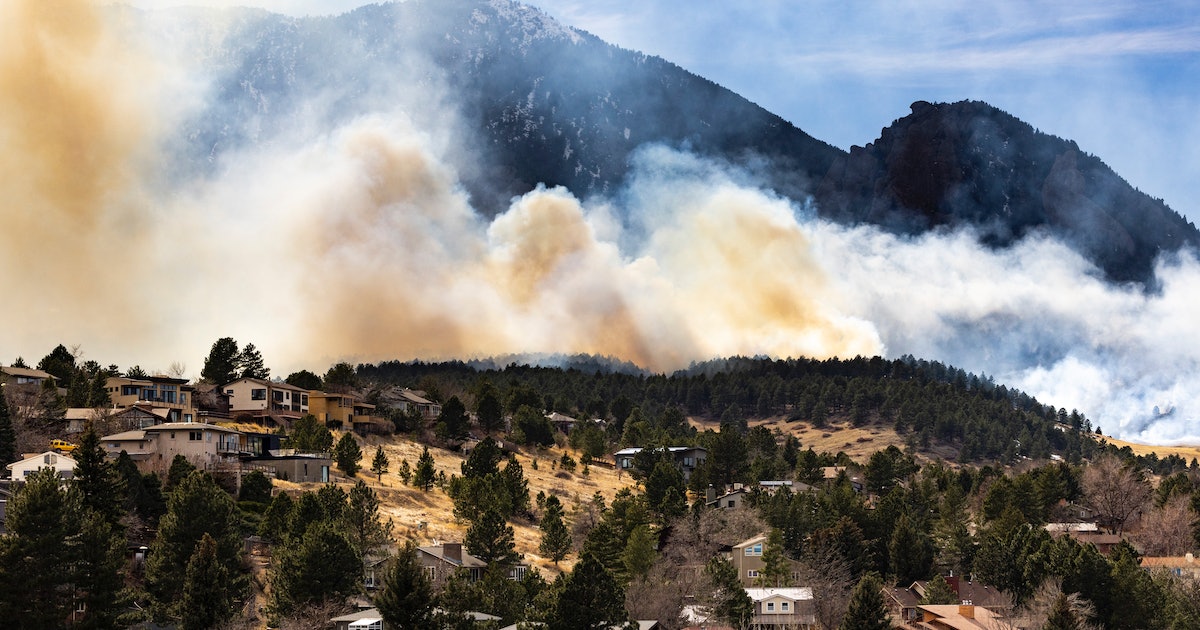 On Dec. 30, 2021, one of the most destructive wildfires on record in Colorado swept through neighborhoods just a few miles from our offices at the University of Colorado Boulder. The flames destroyed over 1,000 buildings, yet when we drove through the affected neighborhoods, some houses were still completely intact, right next to homes where nothing was left to burn.

Although the people who lived in these still-standing homes were spared the loss of everything they owned, when they returned after the fire, they found another catastrophe.

Noxious smells and ash on their windowsills and doorways initially made their homes unlivable – and potentially hazardous to human health. Some of these residents were still reporting health problems from being in their homes months later, even after the homes had been cleaned.

We studied wildfires and their health effects, and we knew people who lost their homes in the Marshall Fire. We also knew we had to act fast to study the fire’s impact so lessons from the Marshall Fire could help homeowners elsewhere avoid similar hazards in the future.

This article is part of a collaboration with Boulder Reporting Lab, The Center for Environmental Journalism at the University of Colorado Boulder, KUNC public radio, and The Conversation U.S. to explore the impacts of the devastating Marshall Fire one year after the blaze. The series can be found at the Boulder Reporting Lab.

Early on, because of our expertise in air quality and health, members of our community reached out to us to ask how they could remediate their homes from the smells and hidden ash and what health risks they should be concerned about.

But this fire was nothing like the wildfires that our research groups at the University of Colorado had previously studied. Most of what burned on that day was human-made rather than vegetation. When human-made materials like electronics, vehicles, and home furnishings burn, they release different types of air pollutants and may affect health differently compared to when vegetation burns.

The outdoor air pollution was less of an issue because the wildfire was short-lived — the powerful winds that fueled the fire quieted down and changed direction about 11 hours after the fire started, and the first snow of the season finally fell. This snowfall ended the fire and cleaned the outside air of pollution.

The key concern was what chemicals lingered inside the undestroyed homes — soaked up into the fabrics of carpets, sofas, drywall, air vents, and more — that would slowly release into the home for some time after the fire.

We hypothesized that there were lots of volatile organic compounds (VOCs) — toxic gases, which were emitted during the fire that had seeped into homes and become embedded in the fabrics and building materials. Of particular concern were aromatic compounds like benzene, a known carcinogen, and polycyclic aromatic hydrocarbons (PAHs), which are emitted from wildfires and have known health effects. In addition, we were worried about metals in the ash and soot deposited in homes and the potential for them to become suspended in the air again when people returned, and heating systems came on.

Despite knowing that some of these gases were toxic, we did not know the levels inside the homes or what remediation efforts to suggest to residents because little scientific research had been published on wildland-urban interface fires like this one. We realized that we needed to do some of that research to help our own community — and the next community affected by a wildland-urban interface fire.

Many community members volunteered their homes for study sites. When we toured these still-standing homes ten days after the fire, we saw what a rapid evacuation looks like, with lunch in the process of being made, laundry being folded, toys in the middle of pretend play…and dust, lots and lots of dust resulting from the fire.

We collected dust samples in about a dozen homes and then analyzed the samples in our labs.

We looked for molecules that could help us think about the origin of the dust. Not surprisingly, the dust was a combination of windblown soil, ash from the fire, and typical household dust. That ash was high in typical combustion byproducts that are known to be toxic, and there was lots of ash, so cleaning up all the dust was important to remediation.

The homes that had been exposed to heavy smoke also still smelled like a chemical fire. A colleague likened it to the smell of gunpowder.

As quickly as we could, we moved a state-of-the-art mass spectrometer into one of the most heavily affected homes in Superior and made measurements of airborne pollutants for five weeks.

Shortly after the Marshall Fire, we found that many pollutants, including PAHs, were indeed at higher levels inside smoke-affected homes than we would expect, but in early February, these pollutants had decreased to more normal levels.

We researched ways in which people could protect themselves and found through experiments that air filters with activated carbon could provide excellent temporary relief from indoor pollutants.

We also observed the results of professional remediation efforts. We are still poring over the air pollution data to understand which materials that burned, such as plastics, car tires, furniture, carpet, and roofing material, contributed the most to the air pollutants we observed in the homes.

In addition to the air pollution and ash concerns, people living in the neighborhoods that burn are concerned about their health.

In an initial survey, residents reported a variety of symptoms that they thought might be due to the smoke or air quality concerns of the fire, with the most common being itchy or watery eyes, headaches, dry cough, and sore throat. More than half of respondents also reported disrupted sleep due to the stress of the fire, and almost a quarter attributed headaches, at least in part to the stress of the event.

The physical symptoms could be due to exposure during the fire. However, of those who have moved back into smoke-damaged homes, they report the symptoms most often inside their homes.

This fall, more than nine months after the fire, some residents reported rashes and burning sensations despite having cleaned their homes of ash and the smell of VOCs having dissipated. Another round of surveys is now helping gather more information about lingering symptoms. In addition to physical health symptoms, we are also asking questions about mental health, which is a growing concern from so-called natural disasters.

While we know that the VOC concentrations inside the homes that we worked in have returned to normal levels, some individuals may be more sensitive than others. And while there has been research into the health effects of some VOCs, not all have been studied extensively, nor have studies looked at the health impacts of combinations of VOCs.

As global temperatures rise and more people move into once-wild landscapes at the edges of cities, the risk of wildfires spreading into urban areas rises. We hope that our work can help people deal with the air pollution aftermath of future blazes.

This article was originally published on The Conversation by Colleen E. Reid, Joost de Gouw, and Michael Hannigan at the University of Colorado Boulder. Read the original article here.

On Dec. 30, 2021, one of the most destructive wildfires on record in Colorado swept through neighborhoods just a few miles from our offices at the University of Colorado Boulder. The flames destroyed over 1,000 buildings, yet when we drove through the affected neighborhoods, some houses were still completely intact, right next to homes where…

On Dec. 30, 2021, one of the most destructive wildfires on record in Colorado swept through neighborhoods just a few miles from our offices at the University of Colorado Boulder. The flames destroyed over 1,000 buildings, yet when we drove through the affected neighborhoods, some houses were still completely intact, right next to homes where…