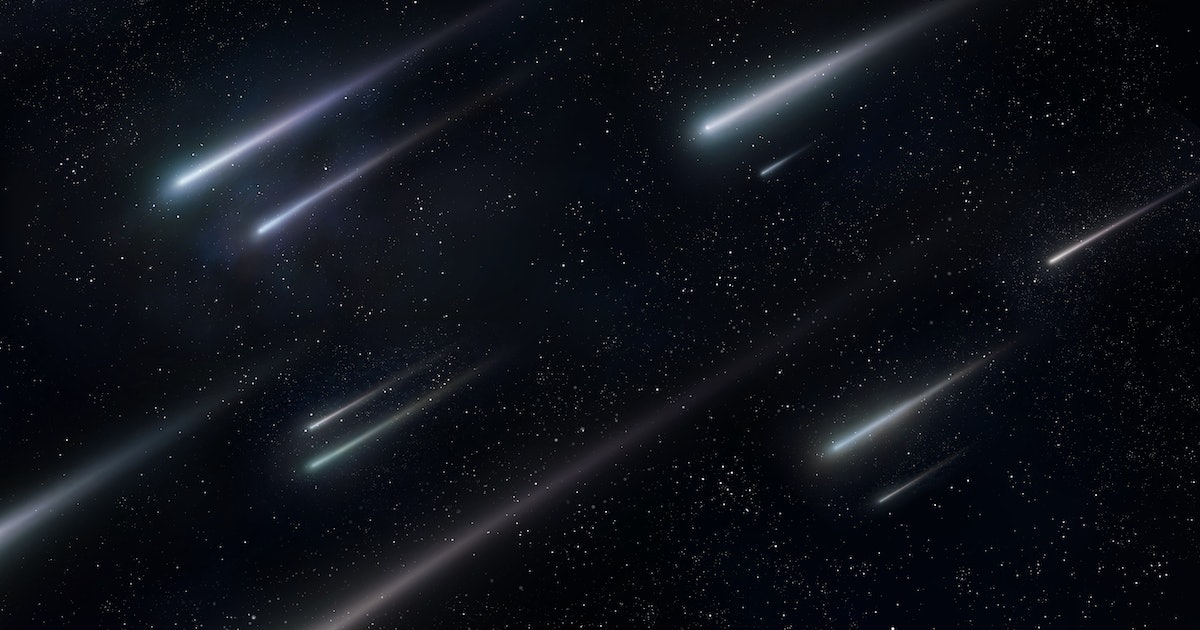 The Quadrantids meteor shower is known for lighting up the sky with bright fireball meteors — but only if you can catch them during their few hours of peak awesomeness, which will happen on the night of January 3-4, 2023, between midnight and dawn. The Moon will be nearly full, so the best viewing will be in the very early morning hours, in the dark hour just before dawn.

Meteor showers are a cool reminder that we live on a giant ball of rock flying through space. As it circles the Sun, Earth sometimes runs into dusty debris trailing in the wake of comets — or, in the case of the Quadrantids, the wake of a small asteroid. Dust grains fall into our atmosphere, and they’re moving so fast that the friction of the air rushing past is enough to disintegrate them, creating the tiny streaks of light we see during meteor showers.

Most of our planet’s encounters with these dusty debris trails happen at about the same point in its orbit, so you can think of annual meteor showers like the Quadrantids as Earth passing a familiar landmark in space.

How old is the Quadrantid meteor shower?

Stargazers first reported the Quadrantid meteor shower in 1825. It got its name because the streaks of light from falling meteors appeared to radiate from somewhere in an obscure constellation called Quadrans Muralis, near the North Star (Polaris). A French astronomer named Quadrans Muralis in 1795 after the instrument he used to plot star positions, called a quadrant. But when the International Astronomical Union compiled its list of “official” constellations in 1922, Quadrans Muralis didn’t make the cut.

It took until 2003 for astronomers to discover where the Quadrantid meteors came from: a small asteroid called 2003 EH1, which may be the rocky remains of a comet that broke apart, either thanks to the Sun’s heat or because it collided with something. It’s only about two miles wide, which is small for an asteroid — and that means the trail of dust in its wake is also fairly narrow.

Earth also crosses the dust trail at a right angle, shortening the time we spend passing through it. That’s why the Quadrantids’ annual fireworks show is so short. Most meteor showers last for several weeks but have two or three days of really intense activity, because that’s when Earth is passing through the densest part of their dust cloud of origin. But although technically the Quadrantids last from late December to mid-January, the real show lasts just a few hours.

Where to see the Quadrantid meteor shower

The Quadrantids are mostly a Northern Hemisphere meteor shower, although if you’re north of 51° South you might be able to catch a glimpse. They should be visible across the whole night sky, but they’ll seem to radiate from a point near Polaris, the North Star (look for the end of the Big Dipper’s handle).

For the best view, get as far as you can from city lights (and remember to turn off your car’s headlights), and find an open area with as wide a view of the sky as possible. This is January, so be prepared for cold weather. And don’t give up too early; give your eyes at least half an hour to adjust to the darkness.

The Quadrantids have a habit of producing lots of fireballs: large bursts of light that happen when larger dust particles meet a fiery end in the upper atmosphere. At its peak, the Quadrantid shower can wow viewers with anywhere from 60 to more than 100 meteors per hour if conditions are just right. January weather doesn’t often provide perfect conditions for the entire Northern Hemisphere, however, and the nearly-Full Moon will brighten the sky for most of the night, making brief flashes harder to spot. Meteor-watchers are advised to be prepared for anything.

The Quadrantids meteor shower is known for lighting up the sky with bright fireball meteors — but only if you can catch them during their few hours of peak awesomeness, which will happen on the night of January 3-4, 2023, between midnight and dawn. The Moon will be nearly full, so the best viewing will…

The Quadrantids meteor shower is known for lighting up the sky with bright fireball meteors — but only if you can catch them during their few hours of peak awesomeness, which will happen on the night of January 3-4, 2023, between midnight and dawn. The Moon will be nearly full, so the best viewing will…

Look up! 5 celestial events to watch in January 2023