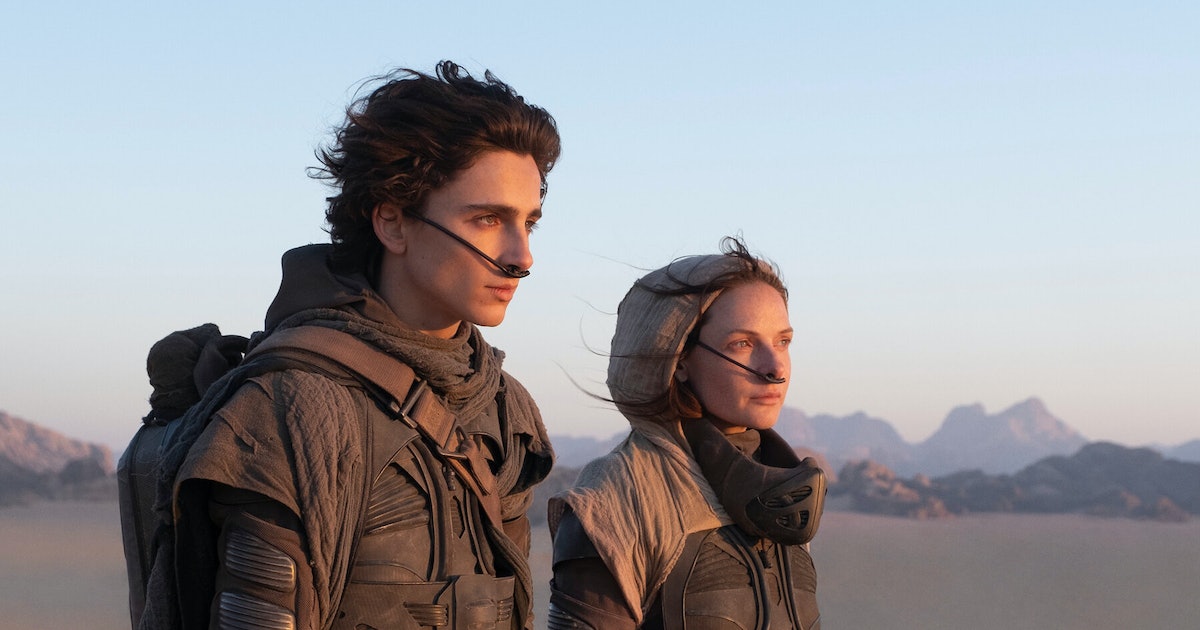 2023 is looking to be a big year for science fiction. Marvel and DC both have highly anticipated new installments, while Brandon Cronenberg tries his hand at doppelgangers and Greta Gerwig tries her hand at satire. From Adam Driver fighting the dinosaurs to Timothée Chalamet riding sandworms, this year’s sci-fi movies offer a wide and exciting variety of stories.

Whether you’re looking for original epic stories, exciting sequels, or the latest entries in your favorite fandom or franchise, here are 10 sci-fi movies that we’re looking forward to the most in 2023, ranked from least to most exciting.

65’s vague title conceals 2023’s most absurd premise: Adam Driver fights dinosaurs. Written and directed by the team behind A Quiet Place, Scott Beck and Bryan Woods, 65 takes the prestige sci-fi approach (an astronaut crash-lands on an unknown planet, which is … Earth!) to a B-movie plot (that Earth is full of man-eating dinosaurs!) and throws in a cute child (Ariana Greenblatt) for Driver’s astronaut to protect. We only hope 65 goes the full B-move route and makes Adam Driver responsible for the extinction of the dinosaurs.

Brandon Cronenberg established himself as a nepo baby apart from the rest with his utterly disturbing psychological horror film Possessor. And he looks to one-up himself with Infinity Pool. Starring Alexander Skarsgård as well as unhinged horror darling Mia Goth, the film follows a man whose accidental hit-and-run at a posh island resort leads to a strange punishment involving doppelgangers and self-mutilation.

Zack Snyder is making the most of that Netflix money with the highly anticipated Rebel Moon, an epic space opera that the Justice League director co-wrote with Shay Hatten and Kurt Johnstad. Featuring an all-star cast that includes Anthony Hopkins, Sofia Boutella, Charlie Hunnam, and more, the film is a sci-fi twist on Seven Samurai, following the desperate civilians of a peaceful colony who seek out the warriors from a nearby planet to save them from the armies of a tyrannical regent.

We are Groot, in that it feels like we’ve gone through a whole lifetime waiting for the third Guardians of the Galaxy movie. But the Guardians are finally back, to search for Gamora (Zoe Saldana) and possibly delve into Rocket Raccoon’s (Bradley Cooper) tragic backstory. James Gunn’s MCU swan song before he heads over to shepherd the DC universe, and the final outing with the galaxy’s most beloved idiots, Guardians of the Galaxy Vol. 3 looks to be a fitting capper to Marvel’s best team of superhero misfits.

Greta Gerwig is making life oh so fantastic for us with her highly anticipated satire Barbie, starring Margot Robbie as the iconic doll. Only this time, she’s real and possibly looking to escape her Barbie world. We’re not sure of the plot of this movie yet, but with a Kubrick-inspired trailer and a cast that includes Ryan Gosling, Will Ferrell, Kate McKinnon, and more, Barbie is a must-see.

5. Aquaman and the Lost Kingdom

Aquaman had an octopus playing bongos, which makes Aquaman and the Lost Kingdom easily one of our most anticipated movies of the year. James Wan returns to bring his signature borderline horror-camp flair to the sequel, which may or may not be Jason Momoa’s last hurrah as Aquaman. But with a plot that looks to bring Aquaman to the mythical “lost kingdom” of Atlantis, what a last hurrah that will be.

4. Knock at the Cabin

Whatever your opinion of M. Night Shyamalan may be, you cannot deny that he knows how to deliver on the intrigue. And every tantalizing new teaser for Knock at the Cabin has been full of intrigue, giving us only glimpses of the premise: a family getaway, a doomsday group, a home invasion. What does it all mean? Don’t spoil the ending by reading the book it’s based on (The Cabin at the End of the World by Paul G. Tremblay) to find out. Instead, bask in the terror of Shyamalan using Dave Bautista to his full, unpredictable, hulking potential.

3. Indiana Jones and the Dial of Destiny

Indiana Jones fans who bristled at the introduction of aliens in Crystal Skull should probably steel themselves: It looks like time travel will definitely be a thing in Indiana Jones and the Dial of Destiny. But with Harrison Ford wielding the whip one last time and Logan director James Mangold at the helm — taking over from Steven Spielberg who, for the first time, is not directing an Indiana Jones movie — The Dial of Destiny might just pull off this sci-fi twist.

2. Spider-Man: Across the Spider-Verse

Spider-Man: Into the Spider-Verse blew up everyone’s expectations for what animation can achieve, and was one of the best Spider-Man movies in decades, to boot. So Spider-Man: Across the Spider-Verse, which looks to be just as visually dazzling and exciting as the first, is a no-brainer when it comes to our most anticipated movies of the year. The directorial debut of Joaquim Dos Santos, Kemp Powers, and Justin K. Thompson; and written by Phil Lord, Christopher Miller, and David Callaham; Across the Spider-Verse cracks open the multiverse, bringing Shameik Moore’s Miles Morales face to face with dozens of other Spider-Man’s, who don’t seem to like Miles much.

No other sci-fi blockbuster in recent memory was as wholly immersive, transporting, or awe-inspiring as Denis Villeneuve’s Dune. But the 2021 film was only half a story, and Dune: Part Two finally gets to the second — and even weirder — half of Frank Herbert’s seminal sci-fi tome. Timothée Chalamet leads the impossibly attractive and talented cast — which includes Rebecca Ferguson, Josh Brolin, Zendaya, and Florence Pugh — as Paul Atreides, who finds a new home amongst the Fremen and begins to take steps toward his fate as messiah and conquering hero. There will be more shiny sword fights, more political entanglements, and more desert battles. But most importantly, there will be more sandworms.

2023 is looking to be a big year for science fiction. Marvel and DC both have highly anticipated new installments, while Brandon Cronenberg tries his hand at doppelgangers and Greta Gerwig tries her hand at satire. From Adam Driver fighting the dinosaurs to Timothée Chalamet riding sandworms, this year’s sci-fi movies offer a wide and…

2023 is looking to be a big year for science fiction. Marvel and DC both have highly anticipated new installments, while Brandon Cronenberg tries his hand at doppelgangers and Greta Gerwig tries her hand at satire. From Adam Driver fighting the dinosaurs to Timothée Chalamet riding sandworms, this year’s sci-fi movies offer a wide and…

Netflix’s ‘Kaleidoscope’ is creating a new way to watch television