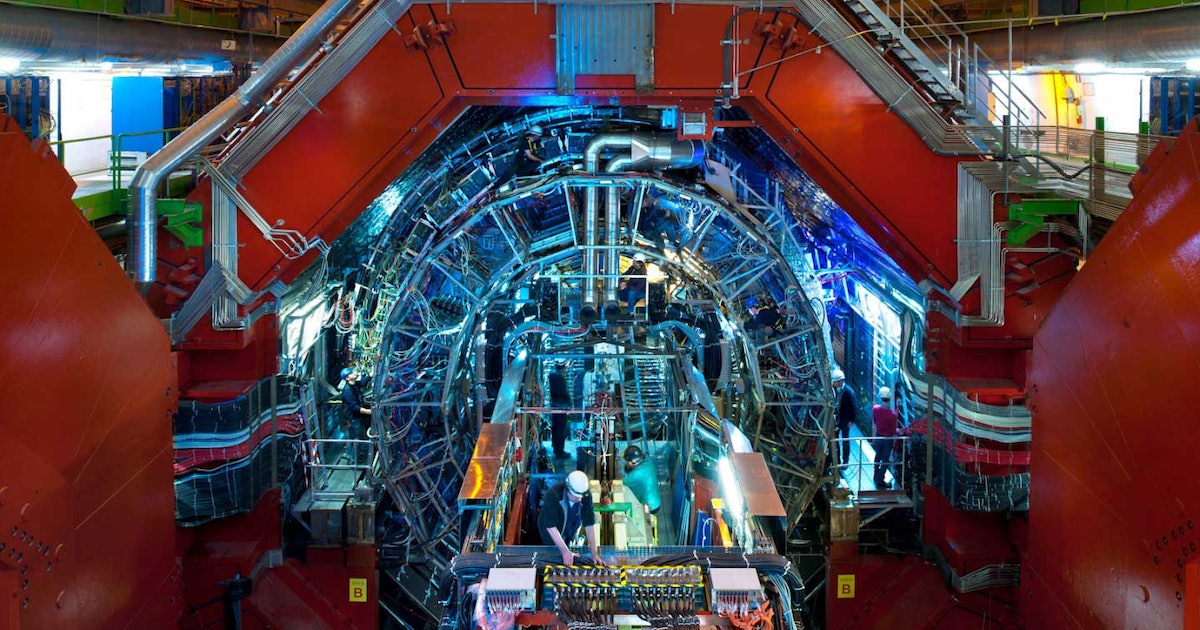 For decades, astrophysicists have theorized that the majority of matter in our universe is made up of a mysterious invisible mass known as dark matter (DM). While scientists have not yet found any direct evidence of this invisible mass or confirmed what it looks like, there are several possible ways we could search for it soon.

One theory is that dark matter particles could collide and annihilate each other to produce cosmic rays that proliferate throughout our galaxy — similar to how cosmic ray collisions with the interstellar medium (ISM) do.

This theory could be tested soon, thanks to research conducted using the A Large Ion Collider Experiment (ALICE), one of several detector experiments at CERN’s Large Hadron Collider (LHC).

ALICE is optimized to study the results from collisions between nuclei that travel very close to the speed of light (ultra-relativistic velocities). According to new research by the ALICE Collaboration, dedicated instruments could detect anti-helium-3 nuclei (the anti-matter counterpart to He3) as they reach Earth’s atmosphere, thus providing evidence for DM.

How the dark matter search began

The theory of dark matter emerged in the 1960s when astronomers were conducting observational tests of general relativity (GR) using distant galaxies and galaxy clusters.

A key prediction of GR is that the curvature of spacetime is altered in the presence of gravitational fields caused by massive objects. This can be observed with gravitational lenses, a phenomenon where light from a distant source is warped and amplified (leading to Einstein’s Rings, Crosses, and Arcs). However, when observing large structures in the Universe, astronomers noted that the curvature they observed was far greater than expected.

This suggested two possibilities: either Einstein was wrong (despite all the tests that have proven it to be correct), or there must be mass in the universe that we cannot see. The challenge for astrophysicists and cosmologists ever since has been finding direct evidence of this elusive dark matter.

How to detect the mysterious matter

As they indicated in their study, which recently appeared in the journal Nature Physics, antinuclei produced by DM annihilations could be detected (depending on the nature of DM itself). In this case, the ALICE Collaboration used the leading theoretical profile known as Weakly-Interacting Massive Particles (WIMPs).

Per the WIMPs theory, DM consists of particles that don’t emit or absorb light and only interact with other particles via the weak nuclear force. This same theory also states that interaction between these particles causes them to annihilate one another and produce anti-He3 nuclei, composed of two antiprotons and one antineutron.

These antinuclei would travel throughout our galaxy and could be measured as cosmic rays, high-energy particles that originate from beyond our Solar System and collide with our atmosphere (producing “showers” of elementary particles).

However, other types of cosmic rays (protons of helium nuclei) can also collide with the interstellar medium (ISM) to create anti-He3 nuclei. Since this source of antinuclei is unrelated to DM, it would constitute the background for DM searches. As Laura Serksnyte — a researcher with the Technische Universitat of Munich and one of the experts on the study — told Universe Today via email:

However, this smoking gun could be challenging to track down, as anti-He3 nuclei might also interact with gas in the ISM as they propagate throughout the Milky Way. This inelastic interaction would cause anti-He3 nuclei to disappear before they reached Earth’s atmosphere, where dedicated instruments could detect them.

On Earth, the only way to produce and study antinuclei with high precision is to create them in high-energy particle accelerators. This, said Serksnyte, is where the LHC and the ALICE instrument came into play:

“Our experiment studied the inelastic interactions of antihelium-3 (produced in the collisions at the LHC) with the matter, where the ALICE detector itself is used as a target. Our work thus provided the first ever measurement of inelastic antihelium-3 cross-section, which constrains how probable it is for the antihelium-3 to disappear if it collides with the matter.”

After measuring the anti-He3 produced in the LHC, the team then applied their measurements to see how these antinuclei would interact with the gas in the ISM — either as a result of DM annihilation or from ordinary cosmic ray collisions with ISM gas.

By calculating the level of antinuclei that disappear while traveling from their point of origin to detectors in Earth’s atmosphere, they were able to estimate the fraction that would be detectable to our instruments. The results, said Serksnyte, were quite encouraging:

By placing tighter constraints on what scientists could be looking for, future surveys will help resolve one of the most pressing mysteries in astrophysics today. The detection of Dark Matter would not only confirm where 85 percent of the matter in the Universe is hiding.

It would also validate a vital part of the most widely-accepted theory of cosmology — the Lambda-Cold Dark Matter (LCDM) model — and confirm that general relativity (a staple of modern physics) is correct. While that won’t be the end of the cosmological mysteries, it will lead to a greater understanding of everything.

This article was originally published on Universe Today by MATT WILLIAMS. Read the original article here.

For decades, astrophysicists have theorized that the majority of matter in our universe is made up of a mysterious invisible mass known as dark matter (DM). While scientists have not yet found any direct evidence of this invisible mass or confirmed what it looks like, there are several possible ways we could search for it…

For decades, astrophysicists have theorized that the majority of matter in our universe is made up of a mysterious invisible mass known as dark matter (DM). While scientists have not yet found any direct evidence of this invisible mass or confirmed what it looks like, there are several possible ways we could search for it…

Space traffic is about to get worse — thanks to the U.S. military