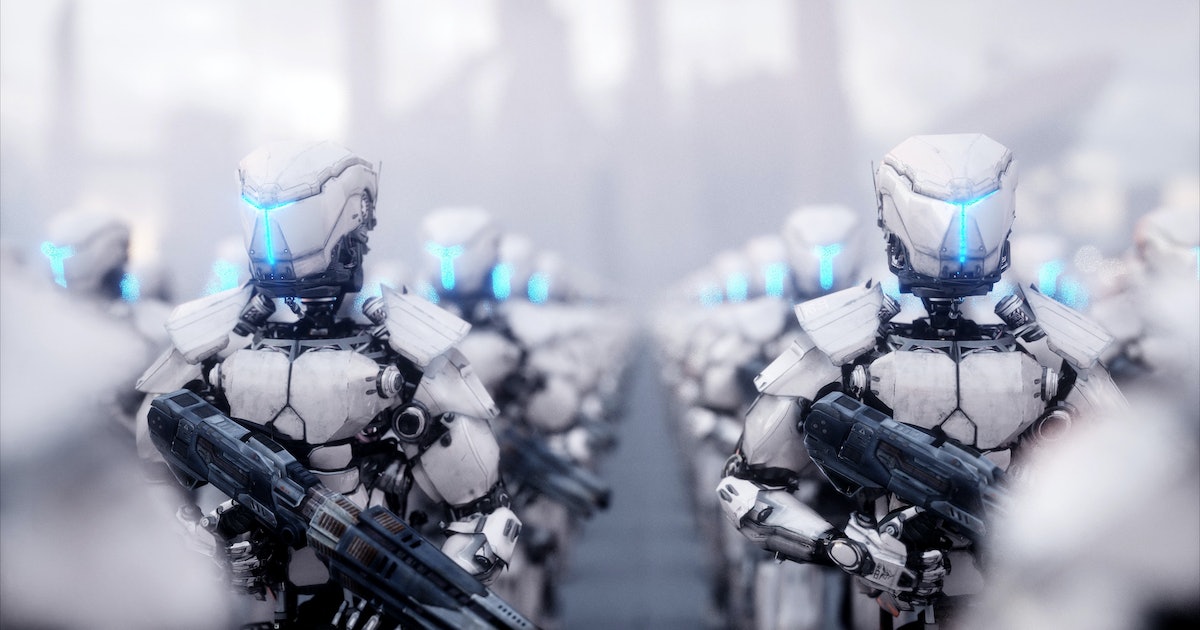 Arnold Schwarzenegger’s murderous cyborg uttered these infamous words in sci-fi action classic, The Terminator. True to form, the killer robot came back in sequel Terminator 2 — but his words also have a more ominous undertone today, when killer robots are actually poised to hit city streets.

Cities like San Francisco have considered deploying police robots equipped with explosives, which means we are now extending the realm of military robots from the battlefield to our daily life. But just how dangerous are these robots to humans — and is a future where smart robots seek vengeance upon humans inevitable?

Inverse spoke with experts to figure out whether the robot-human conflicts in Terminator 2 are a distant threat — or hammering down on our front door.

“There’s a real danger to humans from some military robots which are designed with malicious intent,” futurist Andrew Curry tells Inverse.

In a word: yes. We’ve seen killer robots being used in a variety of military applications, from the controversial use of autonomous drones in the war in Afghanistan to the British deploying a full-scale unmanned navy training operation. Curry calls such military drones “flying robots.”

Most uses of killer robots have been in the military, but in 2016, a deadly robot took out an armed sniper in Dallas. Some say killer robots can help avoid human casualties by putting machines rather than people in harm’s way — like the robot dogs that were briefly used by the NYPD and then removed from duty in New York amidst backlash.

“A police force might decide to send in a bunch of robots to try to neutralize a bunch of criminals in some critical situation, where it is judged that the risk to the police officers is too high in order for them to want to send in human officers,” Sven Nyholm, an assistant professor of philosophy at Utrecht University and author of the book Humans and Robots: Ethics, Agency, and Anthropomorphism, tells Inverse.

Curry also says there are robots that are simply used to clear mines and don’t use lethal force. But activist groups like Stop Killer Robots argue against the implementation of lethal robots, citing ethical concerns.

“There’s a very lively debate about this in military and security circles, and there are activist groups trying to build a code of ethics around the use of such robots against humans,” Curry explains.

Are “smart” killer robots in our future?

Right now, most killer robots aren’t especially “smart” — and many require humans to control them, like autonomous drones. But as AI technology advances and becomes incorporated into robotics, more people are raising alarms about smart robots — like the kind we see in the Terminator franchise — threatening humans. Other AI experts are concerned about smart robots replicating existing biases in law enforcement, like targeting darker-skinned people.

“Machines don’t see us as people, just another piece of code to be processed and sorted,” Stop Killer Robots writes on their website.

But experts say there’s a big leap between the killer robots we see in law enforcement today and the sophisticated futuristic robots in Terminator 2, which can basically mimic humans — to an extent.

“I think it is important to make a distinction between whether robots will (soon) because super smart in a general way, on the one hand, and whether they will become extremely capable with respect to some more narrow task or set of tasks,” Nyholm says.

So-called general AI — in which robots can perform a series of flexible tasks across different functions — is still hard to achieve. Instead, AI can perform a series of narrowly defined tasks very well, such as a military robot searching for hidden explosives. So the same robot that can kill humans effectively would be useless at talking like a person.

“It might be possible — in the near future — to build robots that are super smart with respect to some narrow task/set of tasks,” Nyholm says.

However, Nyholm believes AI doesn’t need to be smart to hurt us. They can hurt us on accident by taking actions no human would — even if it’s not intended to harm humans — or by design, like military robots.

“It is to be expected that AI technologies that usually function very well — and that on the whole benefit human beings — will sometimes under-perform and harm human beings,” Nyholm says.

Will robots inevitably clash with humans?

Although the reprogrammed Terminator in the sequel protects young John Connor, the robots are generally tools of the super-smart AI Skynet sent to destroy humanity. But experts don’t think a robot uprising is in the cards in reality.

“In terms of civilian robots going rogue, that’s a bit of a deep myth of industrial civilization, going back to Frankenstein. This is less likely to happen,” Curry says.

Nyholm agrees, putting the general premise of Terminator 2 firmly in the realm of science fiction.

“What is less likely — and should be considered science fiction — is that there would be a large-scale clash between an army of robots on one side and human beings on another side, where the two are supposed to be members of the same team,” Nyholm adds.

But that doesn’t mean robots aren’t a threat to humans — far from it. In fact, robots are already unintentionally hurting people. Curry brings up self-driving cars that get into accidents because they can’t process the road conditions. Nyholm also says that a police robot might accidentally harm one of the police officers it’s aiding instead of the criminals it’s supposed to catch.

Even more chilling, Nyholm says a robot-human war could happen — but just not in the way Terminator 2 depicts. Instead, a technologically developed nation like the US might send robots to fight humans in a country with fewer technological resources.

“I’ll be back.” Arnold Schwarzenegger’s murderous cyborg uttered these infamous words in sci-fi action classic, The Terminator. True to form, the killer robot came back in sequel Terminator 2 — but his words also have a more ominous undertone today, when killer robots are actually poised to hit city streets. Cities like San Francisco have…

“I’ll be back.” Arnold Schwarzenegger’s murderous cyborg uttered these infamous words in sci-fi action classic, The Terminator. True to form, the killer robot came back in sequel Terminator 2 — but his words also have a more ominous undertone today, when killer robots are actually poised to hit city streets. Cities like San Francisco have…