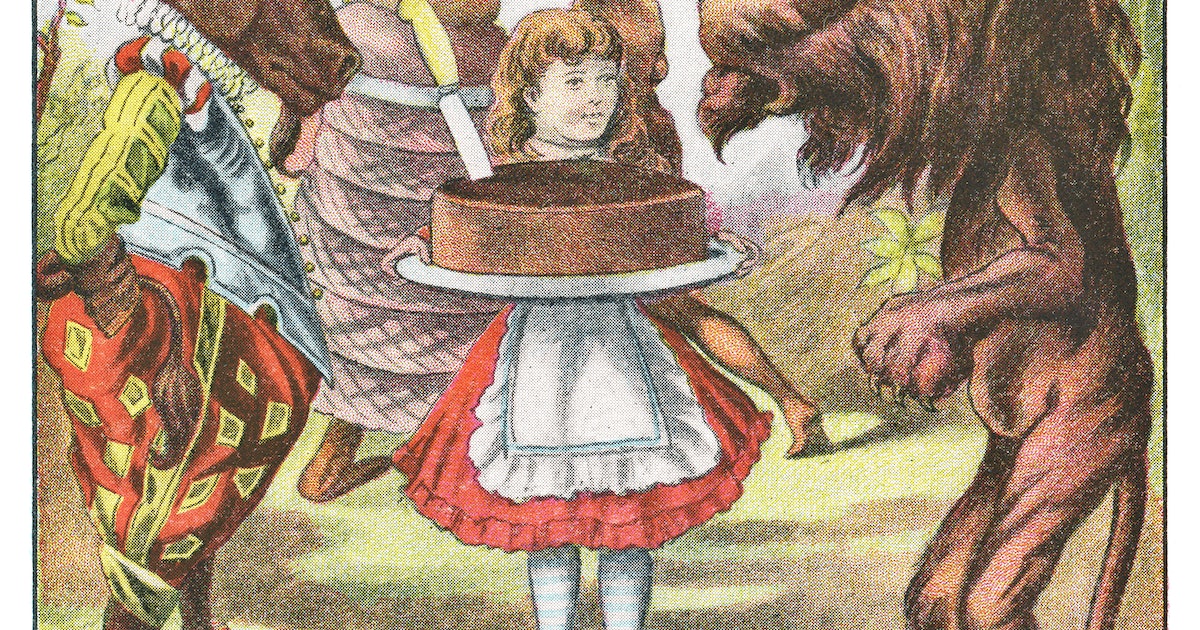 Some 40 years after Alice’s Adventures in Wonderland was first published in 1866, accounts of hallucinations similar to those described by Lewis Carroll began to appear in the medical literature.

In 1904, William Spratling, one of the first American epileptologists, published case studies of several patients for whom “everything looked bigger” just before their seizures; three years later, in 1907, the great British neurologist William Gowers also reported epilepsy patients who perceived objects to look “twice their size” during the aura preceding their seizures; and in 1913, the German neurologist Hermann Oppenheim noted that he had “seen a case of genuine hemicrania [“one-sided headache”] in which there was during an episode of violent migraine an indescribable feeling of detachment of the trunk or extremity after an hour or even a day of spontaneous dizziness.”

The American neurologist Caro Lippman noted, in a 1952 paper published in the Journal of Nervous and Mental Disease, that “the great variety” of hallucinations experienced during the migraine aura was still “little known to the medical profession.” He incorrectly claimed that “there is no description in the migraine literature of hallucinations of the sense of body image,” adding that “over a period of eighteen years of intensive migraine studies, I have collected many histories of such hallucinations from both men and women,” and he then went on to describe seven cases.

One case is that of a 38-year-old housewife whose headaches began during and have recurred ever since her second pregnancy at the age of 19. “Some hours before the attack of one-sided headache and vomiting, and often during and after attack, she may teeter or reel as though drunk,” Lippman reports. “With these symptoms often occurs a sensation of the neck extending out on one side for a foot or more; at other times, her hip or flank balloons out before, with, or after the headache. Very occasionally, she has an attack where she feels small — ‘about one foot high,’ [but] she says she knows the distortion isn’t real because she looks in the mirror to see.”

Another is that of a woman in her 90s who “stated that she had had classic migraine headache with nausea and vomiting . . . from childhood,” who “frequently complains of her left ear “ballooning out 6 inches or more” a few hours before the onset of a mild migraine headache. This feeling of ear distortion did not bother the patient, however, because she, too, “could see in the mirror that it did not exist.”

In a third case, a 23-year-old secretary described her hallucinations in a letter to Lippman:

About every six months, I would have a major attack that lasted for weeks and required hospitalization. It was at these times that I experienced the sensation that my head had grown to tremendous proportions and was so light that it floated up to the ceiling, although I was sure it was still attached to my neck. . . . This sensation would pass with the migraine but would leave me with a feeling that I was very tall. When walking down the street, I would think I would be able to look down on the tops of others’ heads, and it was very frightening and annoying not to see as I was feeling. The sensation was so real that when I would see myself in a window or full-length mirror, it was quite a shock to realize that I was still my normal height of under five feet.

Another case is that of a 38-year-old woman whose hallucinations gave her “a very peculiar feeling of being very close to the ground as I walk along . . . as though I were short and wide, as the reflection in one of those broadening mirrors, one sees in carnivals.” Lippman adds that “if this attack occurs while [this patient] is returning from the grocery store which is at the bottom of the hill on which she lives, the top of the hill seems ‘very far away.’”

Another patient described to Lippman “this same feeling of being short and wide” with explicit reference to Lewis Carroll, calling it “her ‘Tweedle-Dum or Tweedle-Dee feeling’” because it reminded her of the barrel-shaped twin creatures in Through the Looking Glass and What Alice Found There, the sequel to Alice’s Adventures in Wonderland.

The remaining case reports likewise include descriptions that sound remarkably like those in Carroll’s Wonderland book: “the illusion of being taller than I actually am in relation to ordinary objects… My head would seem far above my hands [or] much larger than the rest of my body”; “my neck stretches and my head goes to the ceiling”; “my body is as if someone had drawn a vertical line separating the two halves. The right half seems to be twice the size of the left half. I wonder how I am going to get my hat on when one side of my head is so much bigger than the other. After a few minutes of feeling large, the right half seems to shrink until it is smaller than the left.”

Patients who reported such hallucinations had hitherto often been dismissed as delusional, but Lippman astutely noted the similarity of their experiences to Alice’s as described by Carroll: “I would hesitate to report these hallucinations which I have recorded in my notes on migraine had not more than 80 years ago a great and famous writer set them down in immortal fiction form,” he wrote in concluding his 1952 paper. “Alice in Wonderland contains a record of these and many other migraine hallucinations. Lewis Carroll… was himself a sufferer from classic migraine headaches.”

Subsequently, in 1955, the English psychiatrist John Todd noted the similarity of “bizarre disturbances of the body image” in the hallucinations of epilepsy patients and patients having migraine headaches and “proposes to describe the experiences of these patients under the general heading ‘the syndrome of Alice in Wonderland.’” Some have suggested that Carroll experienced such body image distortions and that they inspired Alice’s Adventures in Wonderland, but this claim was challenged by an examination of his diaries, which found no entries referring to migraine until 20 years after he wrote the Alice books. A drawing and diary entry predating the books have since been discovered. However, both describe migraine symptoms, albeit not the ones described so vividly in Alice’s Adventures in Wonderland.

Despite this long history, Alice in Wonderland syndrome remained obscure until relatively recently. In the past two decades or so, scientists and clinicians have started to pay more attention to it, due partly to advances in functional neuroimaging technology, which enable them to investigate the relationship between symptoms and brain activity.

What is Alice in Wonderland syndrome?

The early reports typically described the syndrome symptoms as “hallucinations,” but today, they are more accurately described as “distortions of visual perception and body representations” arising from a “perceptual disorder.” Another defining characteristic of this disorder is a distorted perception of time, which Carroll also described: “The rabbit-hole went straight on like a tunnel for some way, then dipped suddenly down… [and Alice] found herself falling down what seemed to be a very deep well. Either the well was very deep, or she fell very slowly, for she had plenty of time as she went down to look about her and to wonder what was going to happen next.”

Alice in Wonderland syndrome is thought to be very rare — fewer than 200 case descriptions have been published in the medical literature since Todd named it as such in 1955. The vast majority of these cases involve children, the average age of them being nine. In children, the syndrome is most often associated with encephalitis caused by infection with the Epstein-Barr virus; in adults, migraine is the most common cause, with the syndrome occurring in approximately 15 percent of those with migraines. Other causes include brain tumors, brain hemorrhage, scarlet fever, stroke, depression, and schizophrenia; in 2011, doctors in Israel reported the case of an 11-year-old who developed Alice in Wonderland syndrome after being infected with swine flu (“H1N1 influenza”). The syndrome has also been reported during sensory deprivation, as well as during hypnotherapy and the altered states of consciousness that occur just before falling asleep and just before waking (the “hypnagogic” and “hypnopompic” states).

But patients have reported myriad other symptoms, including the inability to perceive color or motion, enhanced depth perception, illusory movement, the illusion that objects have been split vertically, objects appearing flattened and elongated, objects appearing rotated by 90 or 180 degrees, and seeing multiple images as if looking through an insect’s compound eye.

Usually, such symptoms are not long-lasting, disappearing within a few minutes or days, either spontaneously or after treatment of the underlying cause; in cases of migraine and epilepsy, however, they may persist for years or even throughout the patient’s lifetime. One or more of these individual symptoms are experienced more commonly in the general population, with one 1999 study showing that over one-third of the 297 adults sampled had experienced two such symptoms throughout their lifetime.

The distortions of body image experienced in Alice in Wonderland syndrome are usually consequences of some other condition and can be disorienting or perhaps a little frightening but are otherwise harmless. They can, however, be a root cause, rather than a consequence, of other conditions, and, in some cases, they may be damaging or even life-threatening — a prime example being anorexia nervosa.

As I write in Body Am I, we do not perceive the world as it really is; rather, our perception of the world is our brain’s best guess at reality, a neural construct built from the limited information it receives through our senses. This is also true of our bodies.

To a large extent, we perceive our body in the same way that we perceive an object in the outside world, through multiple channels of sensory information that enter our brain: the sight of our body as it moves, the sounds it makes, the touch and pain signals that arise from our skin, our muscle sense, and our internal sensations. Consequently, interruptions in the stream of sensory information or disturbances in how the brain processes that information can alter our perception of the body, Alice in Wonderland syndrome being just one example of many. Indeed, we do not perceive our body objectively; we perceive it subjectively, from the inside, and the end result of our bodily perception is what each of us calls “me.”

This article was originally published on The MIT Reader by Moheb Costandi. Read the original article here.

Some 40 years after Alice’s Adventures in Wonderland was first published in 1866, accounts of hallucinations similar to those described by Lewis Carroll began to appear in the medical literature. In 1904, William Spratling, one of the first American epileptologists, published case studies of several patients for whom “everything looked bigger” just before their seizures;…

Some 40 years after Alice’s Adventures in Wonderland was first published in 1866, accounts of hallucinations similar to those described by Lewis Carroll began to appear in the medical literature. In 1904, William Spratling, one of the first American epileptologists, published case studies of several patients for whom “everything looked bigger” just before their seizures;…