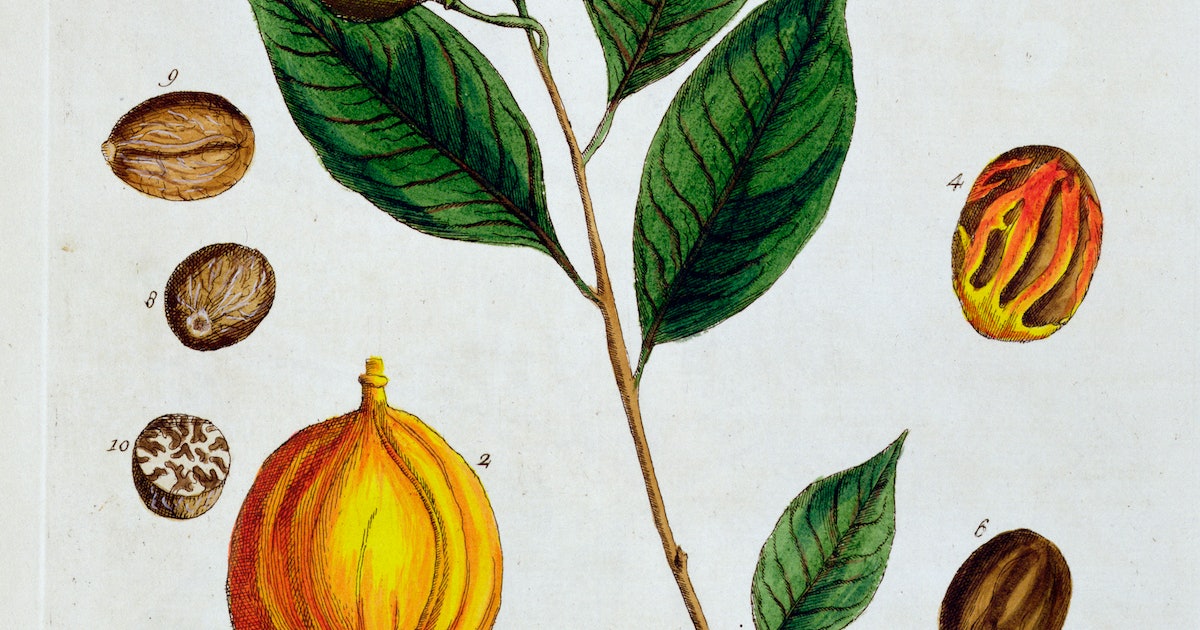 Inside the toxic history of a beloved festive spice

You can use spices all year round. But much like cinnamon, ginger, and anise, nutmeg is an essential festive spice.

Grate it onto eggnog or hot chocolate, sprinkle it into pies, mix it into your gingerbread recipe or pumpkin spice latte, add it to mulled wine or simply stir it into hot milk. And, thanks to its warming, woody flavor, nutmeg is a versatile spice that tastes almost as good with savory dishes as it does with sweeter ones.

But did you know that nutmeg has a dark history and, if you eat too much, it could lead to nauseating and disturbing hallucinogenic effects?

There’s no nut in nutmeg

Nutmeg doesn’t come from a nut but from a seed found inside the fruit of the Myristica fragrans, a type of evergreen tree. It takes a full five years for these trees to flower, and they can go on to bear fruit for decades.

A mature tree, which grows up to 40 feet high, can produce more than 2,000 nutmegs every year. In his book, The Taste of Conquest, food historian and author Michael Krondl writes:

“Nutmegs grow much like lemons or plums on trees that, given the room, rise in handsome symmetrical cones of lustrous green foliage.”

Although nutmeg spice comes from the seed of the Myristica fragrans’ fruit, mace — another kind of spice, not to be confused with the self-defense spray — comes from the bright red webbing that surrounds it.

The spice must flow

Nutmeg trees are found on the Banda Islands, part of the Maluku archipelago (or the Moluccas) in Indonesia. Food historian Tasha Marks tells Inverse that nutmeg has a particularly dark past.

“It’s full of atrocities, slavery, and genocide.” She explains that in the 1500s, the British, Dutch, Spanish, and Portuguese competed to find and colonize the Banda Islands, the home of nutmeg.

“Asian and Arabic spice traders had kept the location a secret for centuries, preventing Europeans from taking part in the lucrative nutmeg trade,” Marks explains. At one point, the Dutch drew up a treaty to give them exclusive trading rights for nutmeg, but the Bandanese people carried on trading with other powers.

“The Dutch responded with brute force. They killed many of the local population in order to take control of the plantations and enslaved the remaining inhabitants,” Marks says. The Dutch control was brutal, and the Indigenous population of the Banda Islands fell from an estimated 15,000 people to only around 2,000 inhabitants.

“There was moral outrage over the massacre of the Bandanese in the 17th century,” Marks says. “But this outrage received little international attention, and this history has gone mostly untold.”

It wasn’t until 1982 that the Indigenous Banda population took over the state-owned nutmeg enterprise.

“They split the groves equally among local families, building collectives that buy from harvesters, then sell nutmeg on to external interests,” Marks says.

Learning about the history of nutmeg has reframed how Marks thinks about the spice — and she’s not alone. “The material culture of nutmeg is all about performance and showmanship, class and refinement,” she tells Inverse. “But we now know that behind the scenes, the harvesting of nutmeg had none of these same principles.”

The versatility of nutmeg

Nutmeg was perhaps so desirable partly because it has been used in food production for millennia. One research paper even claims it was used to cook on the Banda Islands more than 3,000 years ago.

But look back at centuries-old accounts from Europe and Asia, and you’ll find that nutmeg has been a cure-all for all sorts of ailments.

At one point, nutmeg was believed to protect people from the bubonic plague. It’s been linked to relieving symptoms of cholera, psychosis, and stomach cramps. It’s still used to prevent bloating and inflammation of the gut lining, alleviate pain, aid sleep, and calm nerves. And there are several accounts of it being used as an aphrodisiac and even an abortifacient.

Some of these effects have been scientifically proven — like its antioxidant and antimicrobial properties — but more research is needed.

Yet for as long as nutmeg has been used for medicinal purposes, it’s also had a reputation for its potent hallucinogenic properties, caused by a volatile and toxic compound found in nutmeg called myristicin.

“Myristicin is a molecule related to amphetamine and MDMA (ecstasy),” Cordelia Running, associate professor in the Department of Nutrition Science at Purdue University, explains to Inverse. “It naturally occurs in nutmeg and can influence brain chemistry — but in doses you’d be unlikely to get from typical use in cooking or baking.”

We asked Running exactly how much we’d need to add to our eggnog to feel these effects.

“I ran the math, and you’d have to eat a whole jar of nutmeg to reach a dose that reportedly gives ‘mild effects,’” Running says. “You’d smell amazing, but it’d be quite a challenge from a practical perspective.”

Even though you’d need a lot of nutmeg to alter your brain chemistry, many people have managed it — both intentionally and unintentionally.

“The compound can be extracted from nutmeg in ways that concentrate it, and that’s when you’d expect to see stronger effects,” Running says. These effects vary, but according to medical sources, they often include abdominal pain, nausea, vomiting, dry mouth, flushing, tachycardia, strange behavior, delirium, and depression.

One well-known experience was documented in the 19th century by Czech physiologist Jan Evangelista Purkinje, who tested a lot of different drugs and compounds on himself. After eating three nutmegs and washing them down with wine, he reported a strange shifting of time and space.

“Time seemed long,” he wrote. “I got to the opposite side of the place where I was going. During this time dreams and physical activity battled one another.”

A case study from 2005 detailed the story of an 18-year-old woman who accidentally experienced nutmeg intoxication after grating 50 grams of the stuff into a milkshake. She experienced heart palpitations, drowsiness, nausea, dizziness, and dry mouth. She wasn’t hallucinating but was in a trance-like state and described feeling “like Jack in the box wanting to get out” for hours after ingesting it.

Several first-hand accounts of similar kinds of nutmeg intoxication have also been shared on social media. TikTok user @twistedfirestart2021 posted a video about when she made cookies for herself and a friend to eat and added several different spices, including loads of nutmeg. She felt nauseous and high and had to go to the hospital. “It felt like someone was stepping on my head for three days,” she says. “Nutmeg is the worst drug in the world.”

With this nightmare-like list of side effects, you might be surprised to learn that plenty of people do ingest nutmeg recreationally and have for as long as they’ve cooked with it.

“Both American prison inmates and hippies grooving on Goa’s beaches have gotten high on nutmeg,” Michael Krondl writes. In his autobiography, human rights activist Malcolm X wrote he smoked it in prison for a legal high: “a penny matchbox full of nutmeg had the kick of three or four reefers.”

And according to accounts from his son, many of the philosopher and astrologer Nostradamus’ prophecies came to him during trance sessions “with the help of occult magic and large quantities of nutmeg.”

Ultimately, it’s an unpredictable and deeply unpleasant experience. Even writer William S Burroughs, who reportedly tried a lot of drugs in his time, made reference to the not-so-great side effects after smoking nutmeg in ‘Afterthoughts on a Deposition,’ which is an index to Naked Lunch. “Results are vaguely similar to marijuana with side effects of headache and nausea […] I have only taken nutmeg once.”

Several deaths have been linked to nutmeg intoxication over the years, but experts believe that’s incredibly rare, and others aren’t convinced nutmeg was solely to blame. Still, given the severity of the symptoms, and the fact they often last for days, it’s no surprise that parents are concerned their teens might turn to nutmeg as a legal high. According to the Illinois Poison Center in the U.S., over a 10-year period between 2001 and 2011, there were only 30 documented cases of nutmeg poisoning. But there’s concern now that the proliferation of spice-eating challenges, and even specific nutmeg challenges, on TikTok may cause those numbers to rise. As with all social media-induced worry, it’s difficult to say how much of a danger TikTok truly poses or whether some sensational media outlets have whipped genuine concern into a moral panic.

We don’t expect to see a nutmeg drug craze sweeping across the country anytime soon. For most people, the side effects are perhaps not worth it. And, as Running explained, you’d need a massive dose to feel any effects. Then again, unintentional intoxication can happen. So be wary of how much ‘meg you’re spooning into your festive dishes this holiday season.

TASTE OF THE HOLIDAYS is an INVERSE series about the science of food supported by Target. Get the inside scoop on your favorite (or hated) nostalgic holiday dishes via our hub, which will update with new stories through December 2022.

You can use spices all year round. But much like cinnamon, ginger, and anise, nutmeg is an essential festive spice. Grate it onto eggnog or hot chocolate, sprinkle it into pies, mix it into your gingerbread recipe or pumpkin spice latte, add it to mulled wine or simply stir it into hot milk. And, thanks…

You can use spices all year round. But much like cinnamon, ginger, and anise, nutmeg is an essential festive spice. Grate it onto eggnog or hot chocolate, sprinkle it into pies, mix it into your gingerbread recipe or pumpkin spice latte, add it to mulled wine or simply stir it into hot milk. And, thanks…