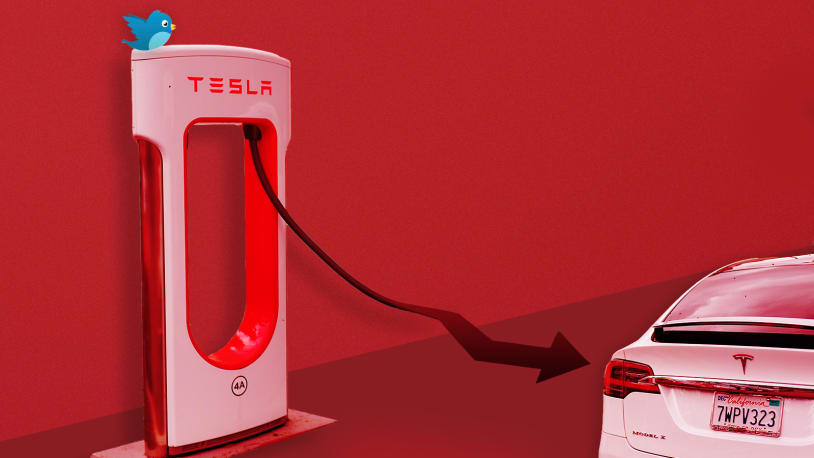 Can Twitter be blamed for the fall in Tesla’s stock price?

Tesla’s stock price has plummeted. The year 2022 will end up being “the worst year ever for Tesla Inc. shares,” Bloomberg reports, thanks to a steep drop in the stock price that coincides roughly with the decision of its leader, Elon Musk, to acquire Twitter and wade straight into America’s culture wars. “The drop had, at one point, made it the third-worst performer in the S&P 500 Index this year.”

Tesla’s problem isn’t just Twitter: The company is reportedly having manufacturing problems at a Shanghai plant, and worries about a recession have battered the stock prices of other notable companies. But Musk’s engagement on the social media site is definitely a concern for some investors. “I don’t care if you’re selling pizza or popcorn or whatever you sell — getting into politics with customers never wins,” one analyst tells The New York Times. Musk seems unconcerned: “Long-term, I believe very much that Tesla will be the most valuable company on Earth!” he said in an email to employees. Are Musk’s adventures in social media damaging the company he built? And if so, what can investors do to fix the problem?

Driving a Tesla is embarrassing

“I’m starting to worry about what sort of political statement the car is making,” Tesla owner John Blumenthal writes in the Los Angeles Times. The car used to be a statement — not just of style, but of commitment to the environment. With climate change ravaging the planet, driving a gas-fueled car meant “at least one polar bear was wandering around homeless and hungry because of me.” Buying a Tesla was virtuous — but maybe not anymore. Musk has turned Twitter into an “unsupervised playground for neo-Nazis and other random hatemongers” and that makes it embarrassing to be seen in one of the company’s cars. While a Tesla remains a “beautifully designed car with no carbon emission,” Musk’s “political descent into the dark side” has Blumenthal considering selling his Tesla. It might not make much difference, but driving one of Elon’s vehicles just feels icky now. “I do know that I’m just not as comfortable driving it anymore.”

Competition is coming in the electric car market

Actually, the problem isn’t so much Twitter — it’s that Tesla no longer has a monopoly on the electric car market, Holman W. Jenkins Jr. points out at The Wall Street Journal. “Tesla won’t have the electric-vehicle market to itself,” now that other big companies are getting into the business. Musk was always going to be challenged, sooner or later, when it came time to sell vehicles “into a crowded and competitive car market.” That time has come, and at a bad time for Tesla thanks to an “expected recession to China’s COVID chaos, spiking minerals prices and declining consumer confidence.” While Musk “gets blame from his most loyal investors for triggering the selloff because of his Twitter engagement” the truth is that Tesla’s stock “is still richly priced for a car maker with its growth prospects.” The electric car market is still growing, but that market “will be fought over fiercely with other companies.”

Sure, there are other great new electric vehicles out there, Farhad Manjoo writes for The New York Times, but Musk’s “chaotic and polarizing tenure as Twitter’s chief executive” is also taking a toll on the brand. Surveys show that perceptions of Tesla started falling right about the time Musk started his pursuit of Twitter. Tesla’s sales remain strong, and the passage of the Inflation Reduction Act — with its incentives for consumers to buy electric vehicles — should actually help the company reach new heights. “But its success could get sidelined by Musk’s tweets.” While rising interest rates and the likelihood of recession are also propelling Tesla’s stock decline, those are just “side issues.” If Musk can somehow discipline himself on Twitter, the company “could quickly recapture its former glory.” With great new electric cars from Ford, Chevy, Mercedes, and Rivian hitting the market, “Musk’s recent role as the town crier for the red-pilled online right [is] especially puzzling and, for his car company, perilous.”

Time for an activist investor to shake things up

Part of Tesla’s problem is that it has no one to rein in Elon Musk, Liam Denning writes at Bloomberg. The publicly traded company has a board of directors that technically oversees Musk, “but the fact that, apart from Musk himself, the longest-serving member on that board is his own brother rather says it all.” Compare Tesla to Exxon, an oil company that seemed to be in decline while the carmaker was ascending. Now it’s Exxon that appears to be in a strengthening position while Tesla falls. Why? Because activist investors leveraged the grumpiness of investors with Exxon’s weak stock returns to “force board and strategy changes.” While oil prices have also rallied, due to the Russian invasion of Ukraine, “renewed capital discipline has also been crucial” to Exxon’s resurgence. Tesla could use that kind of discipline. But it’s not clear that any such challenger is in the offing: “Any activist seeking to actually remove him would have to ask: How much is an electric car maker shorn of Musk’s aura really worth?”

Tesla’s stock price has plummeted. The year 2022 will end up being “the worst year ever for Tesla Inc. shares,” Bloomberg reports, thanks to a steep drop in the stock price that coincides roughly with the decision of its leader, Elon Musk, to acquire Twitter and wade straight into America’s culture wars. “The drop had,…

Tesla’s stock price has plummeted. The year 2022 will end up being “the worst year ever for Tesla Inc. shares,” Bloomberg reports, thanks to a steep drop in the stock price that coincides roughly with the decision of its leader, Elon Musk, to acquire Twitter and wade straight into America’s culture wars. “The drop had,…

Justice Department sues one of the largest drug distributors in the U.S.