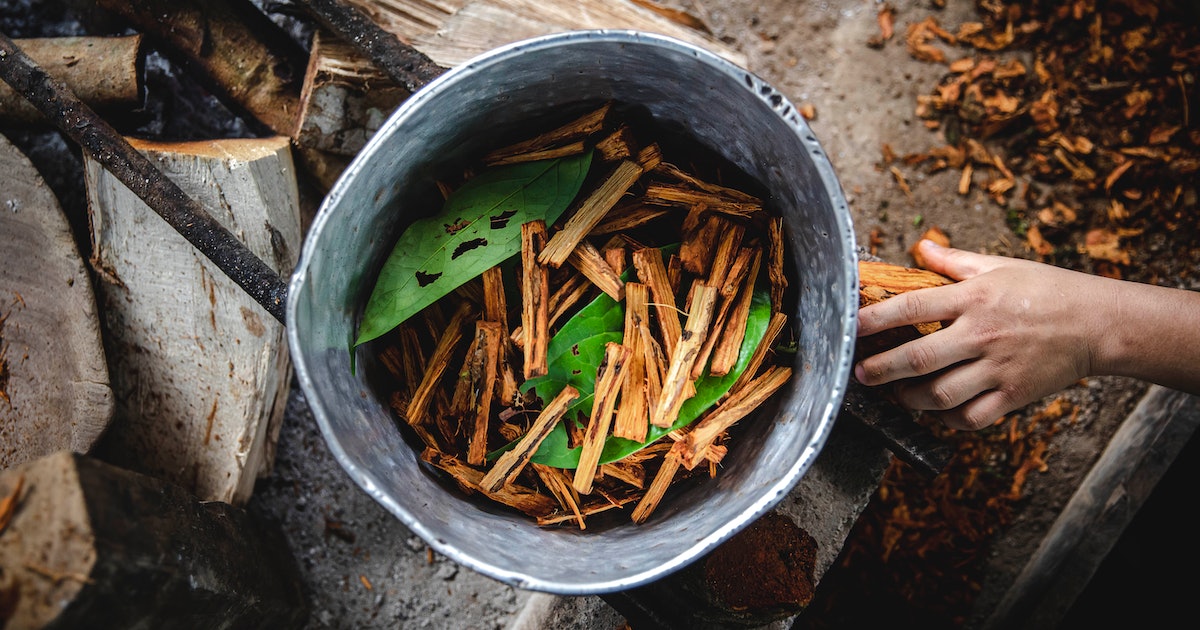 Psychedelic drugs are experiencing something of a renaissance. It’s no longer a case of turning on, tuning in, and dropping out, as the hippy mantra went in the 1960s. Tripping — whether on magic mushrooms, LSD, or psychedelic toads — is now part of the global wellness industry. It’s a way to “find yourself” or deal with a mental health or spiritual crisis.

A psychoactive brew is also part of the mix, but perhaps for the more dedicated “psychonaut.” Because the effects are quite extreme, westerners who take ayahuasca usually do so in ceremonies led by a shaman known as an ayahuasquero or curandero. These ceremonies have been covered in Netflix shows such as (Un)Well.

Ayahuasca is a traditional South American drink used in religious ceremonies. It can be made in a wide variety of ways, but typically, components of two plants — Banisteriopsis caapi vines and the leaves of the chacruna bush — are combined to produce a bitter “tea” that is drunk during the ceremony.

One component is an LSD-like drug called DMT. The other is a monoamine oxidase inhibitor (MAOI), a chemical that prevents the metabolism (breakdown) of the DMT. A DMT “trip” usually lasts 35 to 45 minutes, but the MAOI makes it last much longer (around four hours).

Ayahuasca has been studied to determine if it can help with a variety of mental health issues, such as depression, anxiety, or addiction, and many studies report positive effects. However, few studies have focused on the side effects, and these studies are often small, with participants only from South America.

A recent study published in the journal PLOS Global Public Health has sought to remedy this gap in knowledge. Using an online questionnaire, the researchers sought to examine the side effects of ayahuasca in a much larger and more geographically diverse population.

The study ran from 2017-19, and over 10,000 respondents from more than 50 countries took part. Although most of the respondents came from Brazil (47 percent), significant numbers came from Europe (24 percent) and North America (15 percent).

The most common physical side effects were nausea and vomiting (62 percent of respondents reported this), headache (17 percent), and abdominal pain (13 percent). Two percent of participants needed medical attention for these physical issues. Mental health side-effects were also common: 42 percent reported “emotional-cognitive” side-effects (such as having nightmares or disturbed thoughts), and 38 percent reported altered perception.

The physical side effects are most commonly found in older people and in people with higher lifetime use of ayahuasca. They were also more common in those with existing health conditions, those with a previous alcohol use disorder, and those using ayahuasca unsupervised.

Mental health or cognitive side effects were most often reported by people with previous anxiety issues and lower lifetime use of ayahuasca.

Given that these people had ingested a monoamine oxidase inhibitor (most often harmine or a related compound) and a hallucinogen (DMT), it is not surprising that effects are seen on mental health and perceptions. Both types of drugs have well-known effects on the brain.

Is it worth it?

So, do the potential positive effects on mental health and well-being outweigh the side effects of taking ayahuasca?

Despite the reported positive effects of taking ayahuasca, the physical side effects are very common. These side effects may be reduced by the proper use of ayahuasca in legitimate ceremonies overseen by experienced religious leaders as part of group worship.

However, there are effective drugs to treat anxiety and depression, and they have a better side-effect profile than ayahuasca. These pharmaceuticals have gone through many years of research and have been tested in randomized controlled trials (the gold standard of clinical testing). Ayahuasca has not yet gone through such rigorous large-scale trials.

There is a resurgence of interest in psychedelics as legitimate clinical options, including LSD and psilocybin, and they are considered to be relatively safe. It may be that future research shows a clinical use for ayahuasca and where it might outperform currently approved medications, but we are not there yet.

This article was originally published on The Conversation by Colin Davidson at the University of Central Lancashire. Read the original article here.

Psychedelic drugs are experiencing something of a renaissance. It’s no longer a case of turning on, tuning in, and dropping out, as the hippy mantra went in the 1960s. Tripping — whether on magic mushrooms, LSD, or psychedelic toads — is now part of the global wellness industry. It’s a way to “find yourself” or…

Psychedelic drugs are experiencing something of a renaissance. It’s no longer a case of turning on, tuning in, and dropping out, as the hippy mantra went in the 1960s. Tripping — whether on magic mushrooms, LSD, or psychedelic toads — is now part of the global wellness industry. It’s a way to “find yourself” or…

Why does cheese taste like cheese? Food experts explain how microbes work magic